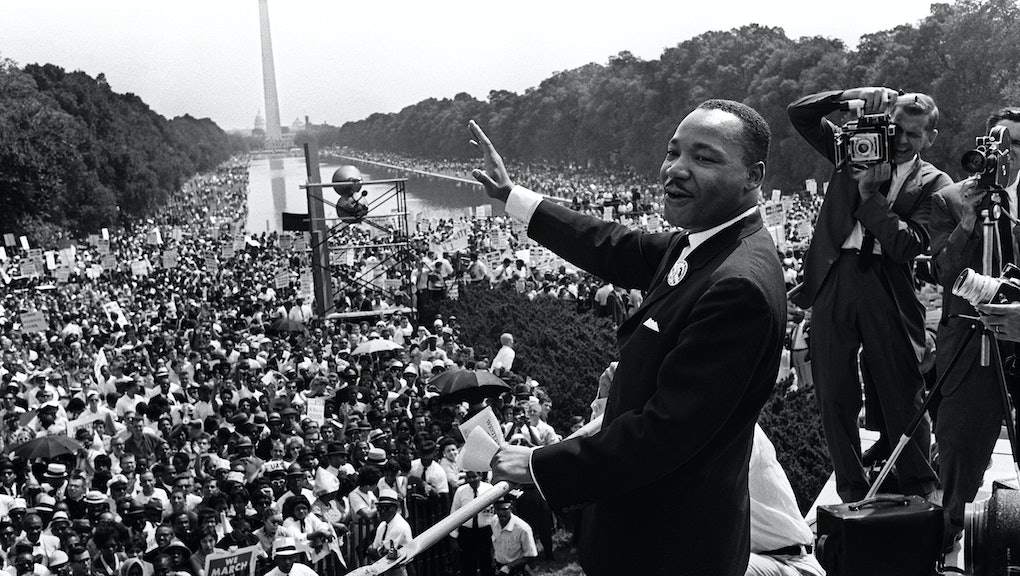 Study Shows How Much Racial Progress We've Really Made — Just in Time for MLK Jr. Day

It's Martin Luther King Jr. Day, which means it's time to reflect on one of America's favorite topics: racial progress.

How far have we come? In the last 65 years, we've seen the legal integration of public schools, the reversal on bans on interracial marriage, the criminalization of discrimination in housing and voting (plus other areas) and the election of our first black president.

And that's just the highlight reel.

But if 2015 taught us anything, it's that progress is only as good as its shepherds. "You can change a law," civil rights activist and educator Josie R. Johnson told Mic in December, "but unless you change hearts, the law, for all practical purposes, remains the same."

With that in mind, it's worth looking at WalletHub's new study on states that have made the most "racial progress" since the height of the civil rights era (ranked on a composite score from 0 to 100; see more on the methodology here).

Case in point: On the afternoon of May 12, Ismael Ozanne — the district attorney for Dane County, Wisconsin — stood before a huddle of news cameras and reporters and told America that Matt Kenny, a 12-year veteran of the Madison Police Department, would not face criminal charges.

Kenny had shot and killed an unarmed 19-year-old black man named Tony Robinson during a scuffle at an apartment complex in March. With gravity in his voice and sweat on his brow, Ozanne did what seemed like the go-to move for every public official trying to offset the kind of racial unrest seen in Ferguson, Missouri, and Baltimore at the time: He quoted MLK.

"Violence never brings permanent peace," Ozanne told the crowd, drawing ire from viewers and critics all over social media. Many saw it as a gross misappropriation of King's legacy, using the activist's words to justify not punishing the killer of another black man — a call for peace in the absence of justice.

But the announcement held added weight in Wisconsin. According to WalletHub's metric — which accounts for disparities like income, education, housing and employment gaps between blacks and whites — the Midwest state ranks in the bottom five when it comes to racial progress.

Specifically, the gains blacks have made there have stayed relatively stagnant over the years. The income gap between black and white Wisconsinites has remained more staunch than 46 other states and the District of Columbia in the last 50 years. The unemployment rate gap has narrowed less over time than 47 others.

This is not new news for the Badger State. The Annie E. Casey Foundation recently called Wisconsin the worst U.S. state to raise black children due to a slew of disparities, and Wisconsin has drawn criticism for incarcerating the highest percentage of black men in America.

That's not all. The Robinson case also speaks to the national conversation around police violence that reached a fever pitch in 2015. According to the Guardian, 1,138 people were killed by U.S. law enforcement officers last year, with black people twice as likely to be killed as the next racial group, Hispanics, and close to three times more likely to be killed than whites.

But Georgia and Mississippi — two places where Jim Crow laws were most viciously enforced — ranked among the three states with the greatest racial progress. These gaps speak to the just how widespread persistent racial inequality remains in America.

So as protests roil across the country in response to these killings, and the failure to indict the police officers responsible, one can't help but think back to the years shortly before King's murder in 1968, when unrest in response to police violence and racial inequality rocked black neighborhoods across the nation, from Los Angeles (1965) to Detroit to Newark, New Jersey (both in 1967).

"Progress," in this context, looks a lot less impressive when today looks like a mirror image of the past. It doesn't help that conservative pundits and their constituents insist inequality is either not a problem, or sources from the pathologies and deficiencies of those who suffer from it.

And just as WalletHub's study shows the troubling disparity gaps that still define black-white relations across the country, other developments — like the U.S. Supreme Court's decimation of the Voting Rights Act in 2013, which southern Republicans promptly capitalized on by making it harder for black people to vote — reinforce the notion that we're dealing with some of the exact same issues now as when King was alive.

For a generation of young people who were taught that the civil rights era was basically one long victory lap, this was a harsh wake-up call in 2015. Later this year, the most openly racist U.S. presidential candidate in recent memory — Donald Trump — is up for potential election. We have work to do.

Martin Luther King Jr. would have been 87 years old last week. As people take to Twitter to share their dreams for 2016 in his honor, the reality of how far we have to go to realize his vision of equality grows ever more stark. King left with us a burning optimism that his dream was attainable. But considering what progress looks like today, it's worth considering the grim possibility put forth by Atlantic senior correspondent Ta-Nehisi Coates in December, "Much of our history is the story of things just not working out."