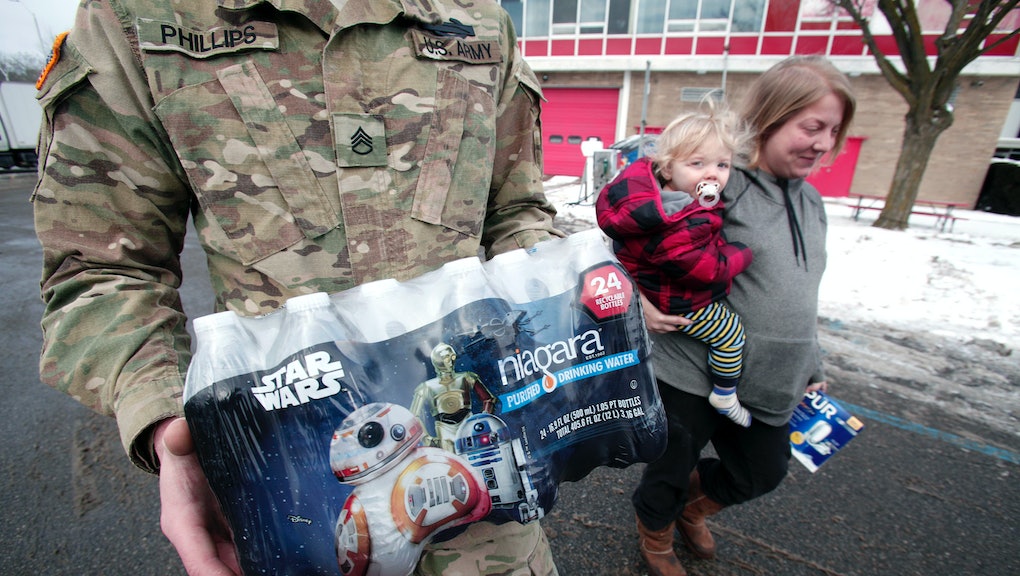 To Understand How Toxic the Water in Flint Is Right Now, This Is What You Need to Know

Something is rotten in the pipes of Michigan.

Things have gotten so bad with the Flint, Michigan, water crisis that on Thursday, state Attorney General Bill Schuette announced he's going to investigate just what the hell's happening 70 miles north of Detroit — and if there's any foul play involved.

"As attorney general, I will investigate this situation to determine if any Michigan state laws have been broken," Schuette said in a press release. "Without fear or favor, I will carry out my responsibility to enforce the laws meant to protect Michigan families and represent the citizens of Flint."

The decision didn't come a moment too soon. In August, a research team from Virginia Tech found excruciatingly high levels of lead in Flint's water supply — levels high enough to declare the water they found, by the Environmental Protection Agency's standards, "toxic waste."

Lead wreaks havoc on the body

At high and low levels, lead has massive effects on a developing body. According to Max Costa, professor and chair of the department of environmental medicine at the New York University School of Medicine, risk of permanent damage is exponentially higher for children, who don't have a well-developed blood-brain barrier. Meaning, if there's lead in the blood, it's probably heading for the brain.

According to the Natural Resources Defense Council, low-level chronic lead exposure in children can also tweak the secretion of human growth hormone, "stunting growth and promoting obesity." Very high levels of lead in children's blood can even cause death from brain damage.

Adults can tolerate higher lead levels, Costa told Mic, but the major concern is what lead does do the blood, not the brain. Lead can damage the kidneys and even turn urine brown or black.

The problem isn't just lead. According to Amy Pruden, a civil and environmental engineering professor on the Virginia Tech team, they found incidence of Legionnaire's disease, a type of pneumonia that comes from bacteria in soil and water systems.

"About 18,000 people get sick from Legionnaire's each year," Pruden told Mic. "In Flint, there were 87 cases of Legionnaire's during the time the water switched. Of those, 10 people died."

It wasn't from nuclear dumping, or some Midwestern equivalent of the BP oil spill. It's because the pipes beneath Flint are old, and when they're filled with corrosive water — that is, water that's full of salt — the old lead piping gets eaten away. The water is so corrosive, in 2014, a General Motors engine plant said it wouldn't use the city's water supply because it would corrode their product.

"Engineers design these things to work up to 50 years, and most cities are beyond that," Pruden told Mic. "You have an aging infrastructure, and a lot of municipalities are cash-strapped."

According to Pruden, the issue is that Flint's water treatment plant was built as a backup to Detroit's water supply, which is less corrosive than what's coming out of the Flint River, the city's main water source until October. Unfortunately, the plant isn't up to the standards of treating the river water. "To treat a source like the Flint River, which isn't the cleanest water source to start with, you have to have a more aggressive water treatment process," Pruden told Mic.

In Flint, residents have switched to bottled water. But in a lot of cases, that only extends to humans.

Animals are suffering too

"In the area we're in, the economic struggle for residents to take care of themselves, and the cost of raising a family ... it's not always in budget to take care of pets, too," Amanda Bramlett, who works at Mayfair Animal Hospital in Flint, told Mic. "A client yesterday runs the tap for the pet and drinks bottled water for themselves, and has been doing that for the last year. I'd say the majority of [clients] do that."

Unfortunately, when animals come to the veterinary office for illness, according to Bramlett, it's on their minds 100% of the time. "We always ask what they drink at home," she said. "It's often that we can only treat the symptoms even if we suspect lead poisoning. It puts us in a predicament because it's not something we can test for."

The water crisis was a massive government failure

It's been three years since Flint opted to switch its water provider to a new source, Lake Huron, as a means of cutting costs for the cash-strapped city. It was a move that wouldn't be set into motion for another three years, while the pipeline was being built. That pissed off the city of Detroit, Flint's former water provider, which responded by no longer selling water to its neighbor.

With no water coming in from its former or future providers, Flint needed to find a fast fix. It chose the Flint River, well-known to locals for being filthy.

"We thought it was a joke," Rhonda Kelso, a long-time Flint resident, told CNN. "People my age and older thought, 'They're not going to do that.'"

Toward the end of 2015, Flint finally conceded and reconnected to Detroit's water system. With Flint's plumbing already badly beaten by years of handling corrosive water, it's hard to tell how much those lead levels will be able to drop in the coming years.

"I think the biggest solution is already done: They switched back to the Detroit water," Pruden told Mic. "Hopefully in the near future we won't see as high of lead levels, and we'll see much better maintenance of the levels of chlorine so any microbial concerns are taken care of. But I think people are wise to continue drinking bottled water and use the water filters that have been given out."