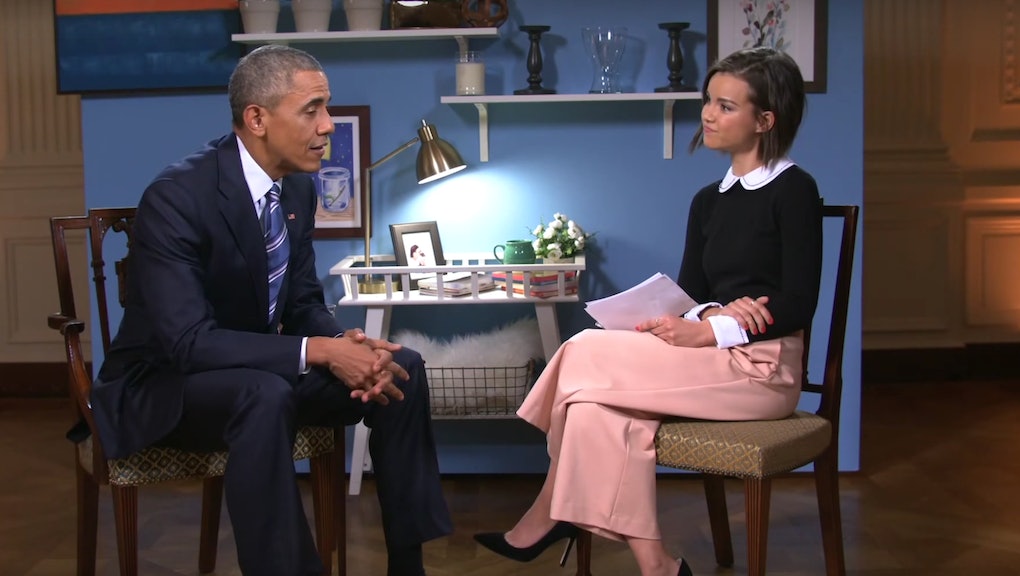 President Barack Obama just found out that there's a luxury tax on tampons in several states — and he's not here for it.

During a series of interviews in which the president sat down with several YouTube personalities, Obama spoke with Ingrid Nilsen, known on YouTube as MissGlamorazzi, where the topic turned to tampons and what women have to spend on them.

Nilsen asked Obama, "Recently, I was shocked to learn that pads, tampons and other menstrual products are taxed as luxury goods in 40 states. And I don't know anyone who has a period that thinks it's a luxury."

Obama responded, "I think that's fair to say. [First lady] Michelle [Obama] would agree with you on that."

Nilsen went on to talk about how crucial tampons are to women's health and asked the president why these items are taxed.

"I have no idea why states would tax these as luxury items," Obama said. "I suspect it's because men were making the laws when those taxes were passed."

Obama urged women in states with tampon taxes to organize to change the laws, explaining that because they were not federal, he did not have jurisdiction. He proposed that activists target governors and state legislatures.

Obama said that Nilsen's question raised the larger issue that has been a priority for his administration: making sure everyone has access to proper health care and preventive care.

He may have just heard about the tampon tax, but there have been some politicians working at the state level to reverse it. One California assemblywoman announced plans to address the whopping $18,000 bill a woman must pay throughout her lifetime just because she has a period.

A recent study showed that, aside from tampons, being a woman just costs more than being a man in general. Mic addressed the $100,000 lifetime price tag — or the #PinkTax — in an episode of Flip the Script.

You can watch the full YouTube presidential interview below. Skip to the 35:15 mark if you want to just watch the part where he addresses tampons.