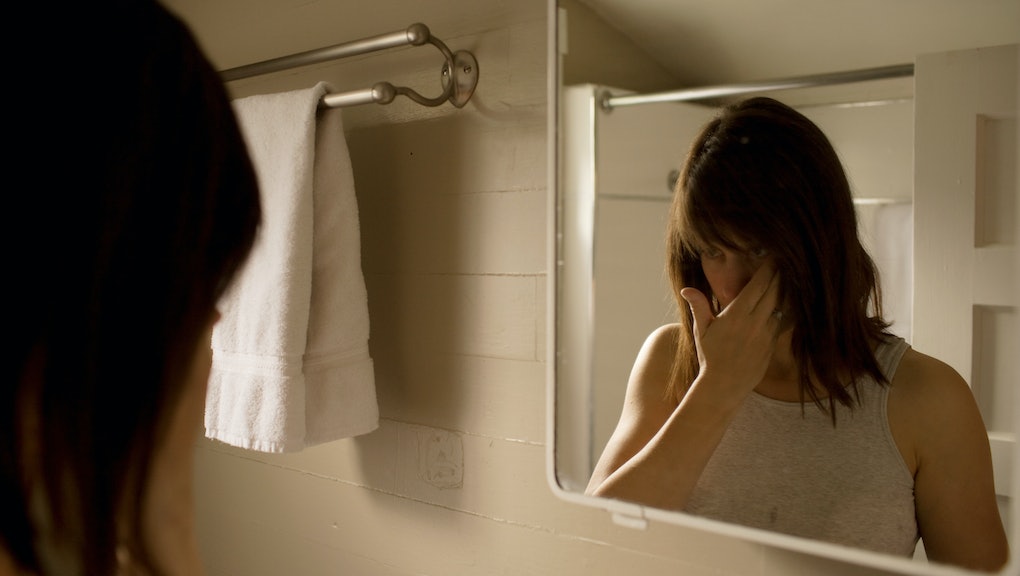 At 28, having made it through the tumultuous early 20s (and over the hump of the Year of the Rockstar), I'm pretty content. I still have bad days and shit still happens – but whereas I once ended my nights drinking, alone and carrying a night's worth of dramatic memories that wouldn't last till the next morning, now I snuggle in bed with a cup of loose-leaf chamomile tea.

And my skin has never looked better.

It wasn't the right dermatologist or product that finally cleared up the acne that's plagued me since middle school (although I love me some Clinique night cream). Rather, it was the decision to quit drinking a few years ago that not only cleared up my personal life, but also the blisters and bumps on my face. As many people currently trudging through Dry January may be also learning, overconsumption of alcohol can wreak havoc on your skin — and cutting back can have the gloriously opposite effect.

Hitting back against redness and acne: Booze dries out your skin, which can be seriously bad news.

"Alcohol dehydrates the body, causing skin to look red, blotchy and bloated," Dr. Joel Schlessinger, dermatologist and Real Self contributor, told Mic. "Drinking alcohol prevents the production of vasopressin, an anti-diuretic hormone that the body uses to absorb water. This causes the kidneys to work twice as hard to remove excess water from your system, leaving all of your organs, including your skin, dehydrated."

That can cause dry skin or aggravate what you already have, thanks to alcohol's ability to cause inflammation. Dr. Damon Raskin, a Los Angeles–based physician, told Prevention that drinking can contribute to ruddiness around your nose and cheeks, as well as aggravate conditions like eczema.

"My skin is very acne prone as well, so once I stopped drinking, the acne started calming down. I still break out time to time due to hormonal reasons, but it's not as severe as it used to be," Heather*, 25, told Mic. "I also lost about 10 pounds, and my belly fat has gone down a lot as well. Overall, I look way better than I used to."

Countering the aging process: As we get older, looking better isn't only about breakouts but — shudder — aging. We're all for facing down the absurd sexist stigmas surrounding aging for women. But if making a lifestyle change can help preserve our skin's youth, why not?

Treating yourself right: Sobering up also gives you the wherewithal to take better care of your skin. When I used to drink, it was not uncommon for me to fall asleep with my contacts on and end up wearing last night's makeup to work the next day. The night is when our skin repairs itself, which pore-clogging makeup can interfere with.

"I used to just pass out almost every night, and since quitting drinking, I think I've slept with makeup on maybe three times in a year and a half," Jane*, 43, a musician, told Mic. "Even going on tour I wash and moisturize and stuff before bed.  And I'm more hydrated. I still get blackheads every now and then, but they also extract easier."

Jane added, "I'm also less anxious, so I pick less at my face."

That anxiety factor is no small thing. An estimated 18% of adults live with an anxiety disorder, and women are twice as likely than men to have generalized anxiety disorder. While having a drink can be a quick fix for calming nerves and alleviating that anxiety, overindulgence can result in increased anxiety and irritability the next day.

If you're simply interested in cutting down to improve complexion, moderation is key, as is choosing the right drinks. "An occasional sweet treat or glass of red wine won't do much harm as long as you balance it out with a healthy diet," Schlessinger told Mic.

But quitting drinking entirely may be the drastic life change some people decide to take. If you do think you have a drinking problem, speak to a therapist or try a recovery program like Alcoholics Anonymous, or the science-based SMART Recovery. Then look forward to waking up hangover-free with solid poops and maybe even, after a while, terrific skin.

"My skin is definitely a lot better. Softer and probably more radiant compared to when I did drink," said Heather. "By far my confidence has changed. I feel sexier overall. Definitely feeling more confident with myself and my body, and self-esteem has been something I struggled with for a while."

"But it definitely is a great thing to be living in the present without relying on substances to enhance it."