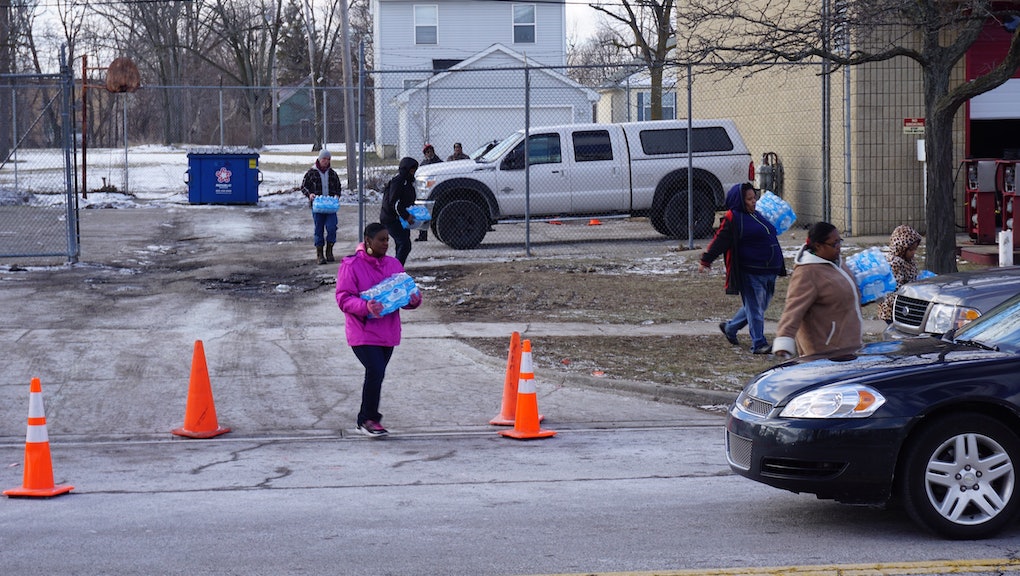 Flint, Michigan, Is Charging Its People Over $100 a Month for Poisoned Water

FLINT, Mich. — The city of Flint still charges its constituents for water. Water that a team from Virginia Tech revealed to be toxic, in many cases. Water that runs yellow and brown and smells like sewage even when it doesn't. And according to Flint residents who spoke to Mic this weekend, that water costs between $100 and $200 a month.

"I noticed the middle of July 2014 we were getting $150 water bills," longtime Flint resident Tyrone Wooten told Mic while he picked up a case of water for his wife and two kids at Flint Fire Station 3. That was a year before the Virginia Tech team arrived to check the water and discovered high lead content and, in extreme cases, enough contaminants for the EPA to dub it "toxic waste."

In 2013, Flint made the cost-cutting decision to stop buying water from Detroit and, instead, connect to a future pipeline coming from Lake Huron. When Detroit stopped selling water to Flint before the pipeline could be built, Flint started drawing water from the extremely corrosive Flint River. The water wreaked havoc on the city's old plumbing, flooding residents' pipes with lead. People of Flint figured it out when their faucets released brown liquid that made their hair fall out and gave them rashes.

Since then, 10 people have died from the pneumonia-like condition Legionnaire's disease. The city finally admitted it needed help. Gov. Rick Snyder called in the Michigan National Guard to bring aid to Flint.

At no point during the sickness and death did Flint stop charging its residents for the poison in their sinks.

"We've been paying for it for so long," Wooten told Mic. "Sometimes it's like, 'Don't flush the toilets sometimes; we don't know how much that costs.'"

Wooten told Mic his bill is usually somewhere between $125 and $150 each month. He said the increased costs of water caught the attention of local businesses in the area, presumably because it might mean locals would switch to bottled water when tap water got too expensive.

At the grocery stores, he said, "water used to be a few dollars. Now it's up two extra dollars for a case of water. We were paying more for water than what we were usually paying when they found out the water prices were really bad."

Wooten's isn't the only case. Of everyone Mic spoke to in Flint over Martin Luther King Jr. Day weekend, only one resident said she paid less than $120 a month. Some large families were paying upward of $200 a month.

"This shit is criminal," Kendrick Boyd, a Flint resident, told Mic. "[Governor Snyder] deserves to go to prison for this. ... They gave [former Detroit mayor] Kwame Kilpatrick 28 years for stealing money. This man just endangered lives. People die from this."

"This shit is criminal," Kendrick Boyd, a Flint resident, told Mic. "People die from this."

"Not only that," Boyd said, "it's something they've known for two years. It's not something they didn't know. Before they switched our water back to Flint, the previous year they told us the river was condemned. Then they gave us the water to drink. So if this wasn't a blatant or conscious decision, I don't know what was."

Boyd and his mother, Tekera Boyd, say they pay over $200 a month for the water coming through their faucets, shower heads and toilets. Boyd says that after switching back to Detroit water, the water he receives now is even worse than it was before, due to lead pipes that were ravaged by the corrosion from the Flint River. "It's still in the pipes," Tekera told Mic. At the Boyd house, the water smells like sewage.

"It's a fear of turning on your faucet water, that don't make no sense," Tekera Boyd told Mic. "I refuse to put it in my mouth. My son filters the water, puts it in the microwave, and my grandson takes his bath with it. We shouldn't have to go through all that."

"We appreciate the efforts, but we get one pack of water per household," Kendrick Boyd told Mic. "How far does that go?"

With the future of Flint's water crisis still indiscernible, it's impossible to tell.