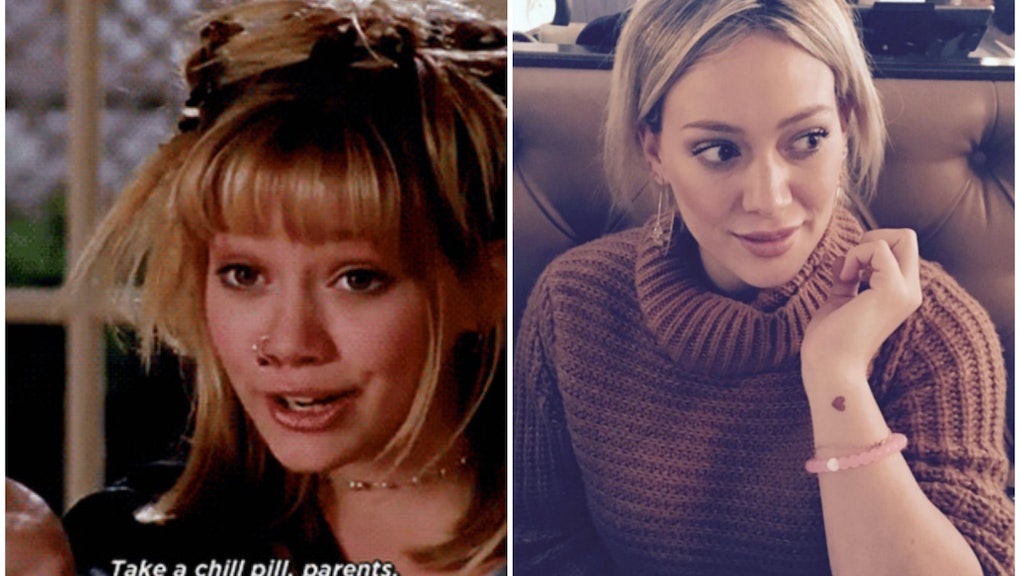 When you were first introduced to actress Hilary Duff, she probably looked like this:

Lizzie was everything you wanted to be when you were a prepubescent girl just trying to get by with as little mortification as possible. From bra troubles and failed rebellion to that one time Lizzie wore a unicorn sweater on picture day (the horror)...

...Lizzie's entire essence was about being relatable, sweet and almost (but not quite) attainable.

But something's changed since 2004, when McGuire ended after three years on the air. Post Lizzie McGuire, Duff initially took on smaller roles and generally stayed out of the spotlight. That was until 2015, when she showed up in a TV Land's hit show Younger and released a new studio album with the single "Chasing the Sun." Both ushered Duff back to the celebrity social scene in a moderate, Us-Weekly-mention-but-not-Vanity-Fair-cover kind of way.

Which put her back on our radar — and helped us discover her oh so real Instagram account, which has 5 million followers and counting, where Duff has blossomed into a cool-yet-relatable 20-something mom. Much like her career-making character, which made its television debut just over 15 years ago, Duff feels like one of us.

Even though she once favored thick headbands and butterfly barrettes (just like we did), Duff is now a bright-lipstick-loving, best-shoes-having style star. Instead of scrunchies, Duff now prefers slouchy beanies. Instead of pigtails, she now opts for loose, perfect waves.

And like us, she also has reincorporated some of her '90s favorites back into her modern wardrobe:

Duff's internet appeal goes beyond stylish clothes, though, which are a dime a dozen for any celebrity worth a stylist's fee. As a 28-year-old mom residing in Brooklyn part time, who is just getting better with age, she feels genuine, with a personal life full of mostly highs and a few notable lows that mirror a real 20-something experience.

In the peak years of her 20s, Duff got married, had a kid (who's now 3 years old) and then filed for divorce in 2015 after four years of marriage. It was all fairly public and remains so, as she posts (remarkably un-obnoxious) pictures of her son, Luca, online.

In 2015, post-divorce, she even opened up to the world about being on Tinder and photographed herself on her first dates. (Unlike you, though, she recorded a pop single about it.) It's a fairly vulnerable position, one some might even cringe at, but only because it's so real.

It's a refreshing treat among the landscape of absurdly overly styled celebrity Instagrams. Some stars, like Taylor Swift and Kendall Jenner, present us with an untouchable, unattainable perfection. A hair is never out of place. Lipstick is always lined. Shoes are always designer. For goddesses incarnate like Rihanna and Beyoncé, the idea of being attainable isn't even on the table.

With Duff, we get a person who feels like one of us.

Sure, sometimes she posts pictures of products she may or may not be paid for, and she does frequently snap pics from the back of a limo or an island vacation. But the rest, from 7-11 treats and subway selfies to laying in bed with a face mask or hating her bra, is all too real. Did you just put your hair up to wash your face and realize you were looking hella cute? Well, Hilary just did too. Do you fucking love Adele? Hilz is with you, of course.

And, like so many of us, she's trying really hard to be as DGAF about it as possible.

Call it basic, or get all cynical on us and call it smart marketing of her "brand" — we're OK with that. Either way, the attainableness is no small thing coming from a famous person, whose Instagram accounts typically tease us into aggravation. Instead, Duff puts forth a McGuire-esque normalcy, one that's endeared her to us all over again.

So thank you, Hilary Duff, for showing us that even if you wore hot pink camouflage in middle school, you can still become a glamorous 20-something woman. Oh, and that all celebrity Instagram doesn't have to be complete fakery.

Lizzie would be proud.