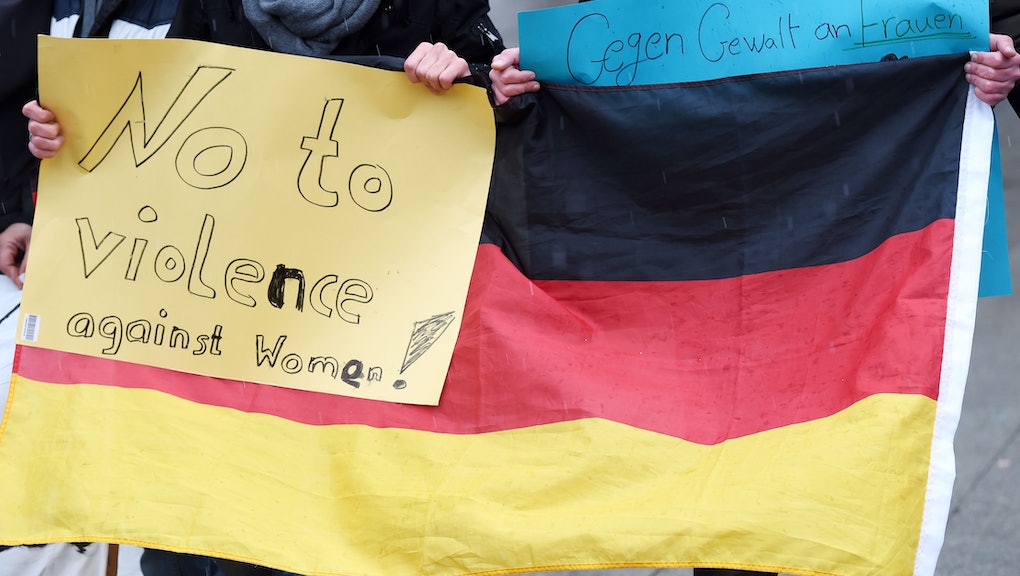 Many were disappointed with authorities' responses to the attacks waged on dozens of women in Cologne, Germany. The city's mayor beseeched women to protect themselves from future robberies and assaults, and the police failed to arrest any suspects, which further enraged those certain the attacks were committed by refugees.

But authorities did act on Monday, arresting the first suspect in relation to the sexual assaults: a 26-year-old Algerian asylum-seeker.

The arrests: The unnamed Algerian suspect was detained in a refugee shelter in the nearby town Kerpen and was held under suspicion of groping a woman and taking her phone, the BBC reported Monday. Another 22-year-old Algerian asylum-seeker was also arrested at the time for allegedly stealing a phone, according to the same report, and a 24-year-old asylum-seeker in the city of Aachen was arrested on a robbery charge, Associated Press reported.

These arrests, however, pale in comparison to the 838 people who filed criminal complaints in relation to the attack and the resulting 766 alleged crimes. Additionally, although 497 of the women were allegedly sexually assaulted and three raped, almost all of the 21 current suspects are being investigated for nonsexual crimes, according to the BBC.

Growing anti-refugee sentiment: The asylum-seeking status of these recent arrestees does little to assuage the incident's contribution to rising anti-refugee sentiment in Germany. More than 1 million refugees entered the country last year in the wake of German Chancellor Angela Merkel's open-door policy. While the policy was first applauded, Merkel and the policy itself are increasingly facing backlash.

After the then-chief of police in Cologne stated that the attackers in question appeared to be Arab or North African — and especially in light of other reports of rampant sexual assault within German refugee communities — the public's resistance to the recent influx of refugees in the nation has only grown. For example, recent YouGov survey results revealed that while about half of respondents felt the number of asylum-seekers in the country was too high in November, that figure has risen to 62% in January, according to the Independent.

Germans are making their feelings known too. In addition to anti-sexual assault protests in the city, the hashtag #rapefugees began to trend in early January. On Jan. 11 protests broke out, and at least 11 refugees were attacked by a mob the day before, the Independent reported. In fact, prosecutors in Cologne recently offered to award nearly $11,000 to anyone with information about suspects in response to this growing backlash.

"We are experiencing a new dimension of hatred," Almin Mazjek, the head of Germany's Muslim Council, told the Independent last week. "The far-right mob sees its prejudices confirmed and an opportunity to give free rein to hatred of Muslims and foreigners."

In addition to continuing to investigate the senseless violence at the heart of the Cologne attacks, it seems crucial for authorities take to note of Mazjek's observation and work to curb similar violence from all sources.