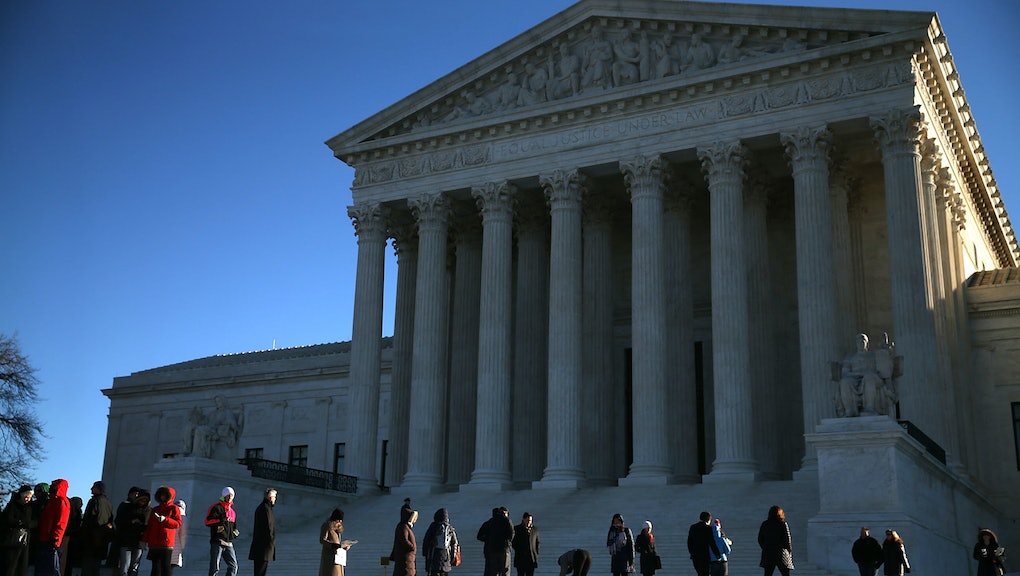 In a move that could double as a judgment on President Barack Obama's legacy, the Supreme Court announced on Tuesday that it will hear a challenge to Obama's executive actions shielding 5 million undocumented immigrants from deportation

"The case will be set for argument in April, making it almost certain that there will be a final ruling by the end of June — in the midst of a presidential election campaign in which immigration is a major issue," noted SCOTUSBlog.

Power struggle: The Obama administration asked the high court to take up the case after 26 states sued the federal government over programs announced in November 2014 that would protect two groups: immigrants who came to the United States as children and are now over 30, and parents of American citizens and permanent residents.

The states have thus far been successful in fighting implementation of the executive orders, which shelter those two immigrant groups from deportation and allow them to seek work permits. Texas has led the way in the fight against the federal orders.

"The administration said Texas and the other states don't even have the right to challenge the plan in federal court," ABC News reported.

However, "the lower courts decided that Texas does have the right, or standing, to sue because at least 500,000 people living in Texas would qualify for work permits and thus become eligible for driver licenses, the cost of which are subsidized by the state," according to ABC News.

DAPA and DACA: As CNN reported, "At issue is the implementation of the Deferred Action for Parents of Americans and Lawful Permanent Residents aimed at the approximately 4.3 million undocumented immigrants who are parents of U.S. citizens or lawful permanent residents, as well as an expansion of the 2012 Deferred Action for Childhood Arrivals targeting teenagers and young adults who were born outside of the U.S. but raised in the country."

The president, frustrated with Congressional Republicans' unwillingness to team up on his reforms, addressed the nation from the Oval Office in November 2014, telling millions of undocumented immigrants they could "come out of the shadows."

The Supreme Court will not rule on the executive actions alone, but on the broader question of whether Obama has overstepped his constitutional authority by extending protections to immigrants who can be ejected from the country by law.

A hot-button issue: Immigration has been a heated issue throughout the 2016 presidential campaign, with Republican frontrunner Donald Trump questioning the "birthright" citizenship of children born on U.S. soil to immigrant parents, advocating construction of a wall on the Mexican border and vowing to deport illegal immigrants en masse.

His rivals, to varying degrees, are also promising to crack down and protect the borders — and say they'd vacate Obama's orders if elected.

Democrats have generally sided with the president, speaking in favor of a pathway to citizenship for undocumented immigrants and vowing to protect his actions if he can begin implementing the provisions of his executive orders.

The topic of immigration has roiled the country, with proponents saying newcomers are making valuable contributions by working hard and trying to attain better lives for their children than they might be afforded in their home countries.

Critics say Americans are footing the bill for the education and health care of people who flout the law and enjoy benefits that should be reserved for citizens and legal immigrants by taking shelter in "sanctuary cities."

The debate has reached fever pitch amid the Syrian refugee crisis and in the wake of the December mass shooting in San Bernardino, California, perpetrated in part by a Pakistani national who came to the U.S. on a visa.

The stakes: The Supreme Court ruling, when it comes down, could well end up being not just a judgment that affects the lives of millions of immigrants, but a political football put into play ahead of the vote for a new occupant of the Oval Office.