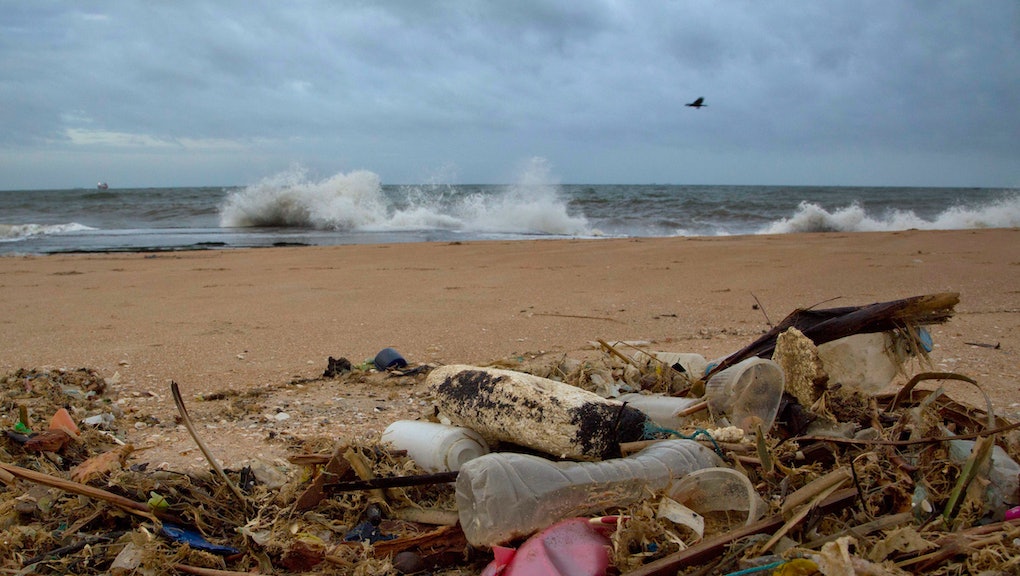 By the Year 2050, There Will Be More Plastic Garbage in the Ocean Than Fish

By the year 2050, fish will officially be out-populated by something decidedly more foreign — plastic trash.

A new study from the World Economic Forum and the Ellen MacArthur Foundation estimates that at some point within the next 34 years, the quantity of plastic waste floating in the world's ocean will outweigh all the fish in the sea put together.

"Given projected growth in consumption, in a business-as-usual scenario, by 2050 oceans are expected to contain more plastics than fish (by weight), and the entire plastics industry will consume 20% of total oil production, and 15% of the annual carbon budget," the foundation wrote in a news release on the paper.

The total amount of plastic already in the world's oceans is immense. A massive patch of plastic waste now sits in each of the world's five oceans, though the vast majority of the plastic remains unaccounted for, and the material does not biodegrade like organic garbage.

Current theories on where the plastic is going include that it is washing back ashore, sinking, breaking down into undetectable pieces or being consumed by plankton and fauna,Vox reports.

Either way, much more of it is coming.

According to Popular Science, in 2015 researchers from the University of California, Santa Barbara, estimated that humans dump somewhere between 4.8 million and 12.7 million metric tons of plastic into the sea each and every year. Study co-author Roland Geyer told the magazine, "Using the average density of uncompacted plastic waste, 8 million metric tons — the midpoint of our estimate — would cover an area 34 times the size of Manhattan ankle-deep in plastic waste."

It's only going to get worse without serious efforts to change the way humans use plastic, according to the World Economic Forum report. The authors wrote that 95% of plastic is "lost to the economy" after a single use, while the Guardian reports the low price of oil is discouraging reclamation efforts and recycling.

The report outlines several mitigation strategies, including dramatically increased recycling of plastic products, reducing the amount of plastic introduced to the ocean and increasing the economic viability of plastic not made from fossil fuels.

"Growing volumes of end-of-use plastics are generating costs and destroying value to the industry," McKinsey Center for Business and Environment expert Martin R. Stuchtey said in the WEF statement. "After-use plastics could — with circular economy thinking — be turned into valuable feedstock. Our research confirms that applying those circular principles could spark a major wave of innovation with benefits for the entire supply chain."

However, scientists currently expect the amount of plastic in Earth's waters to keep rising by massive quantities barring worldwide improvements in waste management infrastructure. With limited time to do so, the clock is ticking.