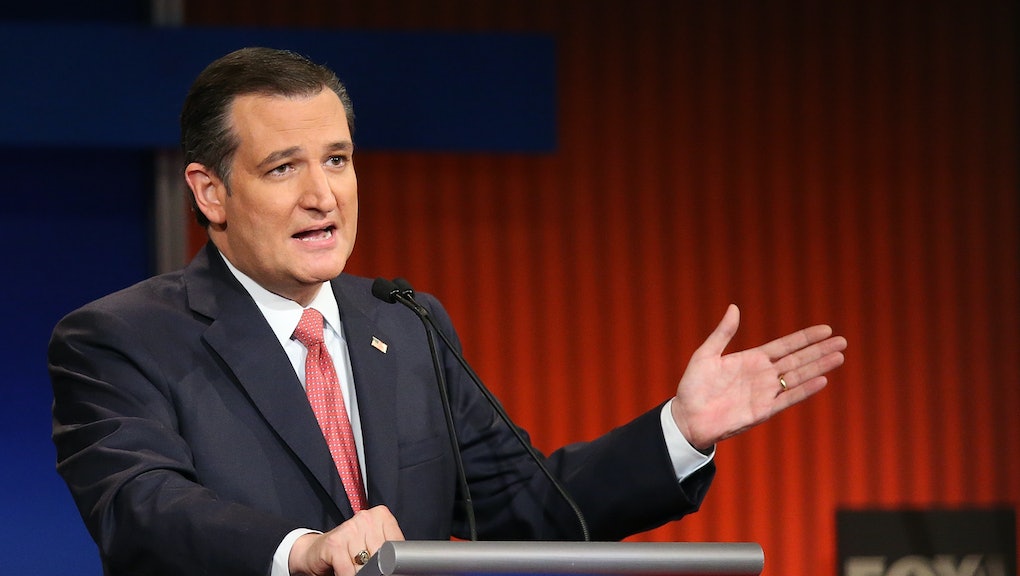 Is Ted Cruz a Natural-Born US Citizen? Here Are Both Sides of the Debate

Now that Texas Sen. Ted Cruz stands as the closest competitor to Republican frontrunner Donald Trump at the top of the national polls, the real estate mogul has set his sights on the senator's citizenship — a similar attack he once used on President Barack Obama. Trump has insisted that Cruz — who was born in Canada and only renounced his Canadian citizenship in 2014 — is not, as the Constitution puts it, a "natural-born citizen."

Why Cruz may not be eligible to run

Questioning Cruz's eligibility as commander in chief ultimately comes down to one's interpretation of the Constitution. After all, the Constitution's section on what constitutes a natural-born U.S. citizen is admittedly vague, with no actual definition of what "natural born" should mean. The term only shows up in the Constitution that one time, according to NBC News.

However, Thomas Lee, a professor of constitutional law and international law at Fordham University in New York City, wrote in a Los Angeles Times op-ed that the historical context of the term must be considered. Lee said there were two main legal theories for what "natural born" meant during the time the Constitution was created, both of which would eliminate Cruz's eligibility. The first is the "law of the soil" (Jus soli in Latin) where the birth must physically be on American land. Under that definition, Cruz, having been physically born is Canada, could not be considered.

Additionally, there was the "law of the blood" — or jus sanguinis — which only applied to patrilineal descent. Since it was Cruz's mother who was the U.S. citizen, and his father was a Cuban citizen, that would also eliminate Cruz as a presidential candidate.

"However odious it seems today, a child born of a woman whose citizenship was different from her husband's —much rarer then than today — could not be a 'natural-born citizen' of the mother's country," Lee wrote for the Times. "That idea wasn't even considered until 1844 in Victorian England."

Why Cruz is a U.S. citizen

In short, because his mother is a U.S. citizen who spent at least five years in the United States after age 14, there was no naturalization process for Cruz after his birth. And just in case there was any controversy over his mother's citizenship, Cruz's campaign team released his mother's birth certificate earlier this month.

"The weight of scholarly legal and historical opinion appears to support the notion that 'natural-born citizen' means one who is entitled under the Constitution or laws of the United States to U.S. citizenship 'at birth' or 'by birth,' including any child born 'in' the United States, the children of United States citizens born abroad, and those born abroad of one citizen parents who has met U.S. residency requirements," the memo said.

While the birther issue hasn't been at the forefront of previous presidential candidates campaigns — such as Arizona Sen. John McCain's — the question of Cruz's citizenship from the Trump camp is "dragging heretofore serious intellectuals down to his level," according to the Atlantic.

Some scholars, however, have seen it as a cheap ploy to drum up controversy. "Trump has also repeatedly and outrageously challenged the natural-born citizenship of President Obama in racially coded/dog-whistle ways that strongly suggest Trump scorns basic constitutional principles of racial equality," Akhil Reed Amar, a professor of law and political science at Yale University, wrote in an op-ed for CNN.

Here's Cruz's response to the controversy: