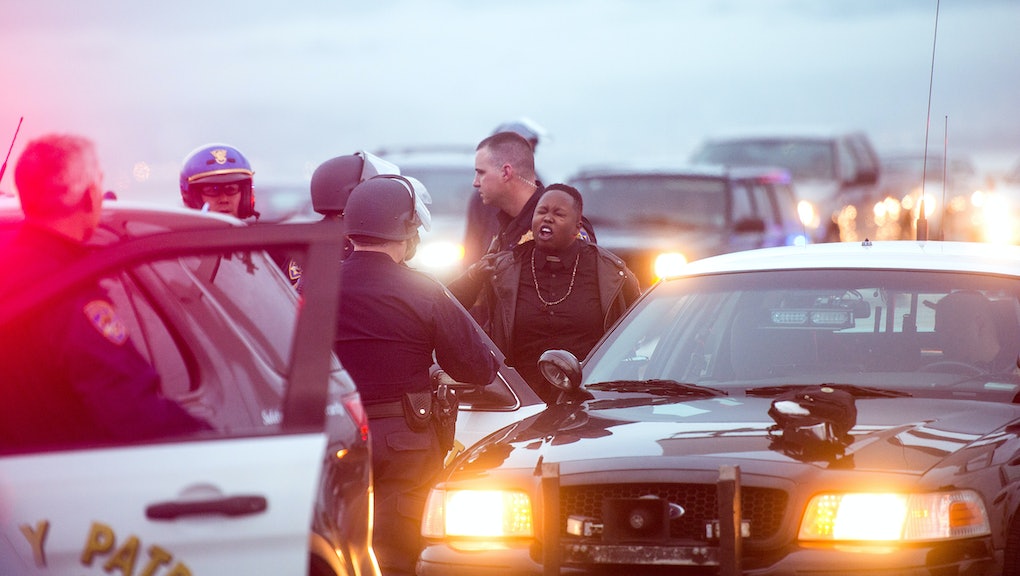 Twenty-five people affiliated with the Black.Seed queer liberation collective chained themselves across the roadway and stopped traffic for up to 30 minutes around 4 p.m.

All of them were arrested later on suspicion of public nuisance, unlawful assembly and obstructing free passage, according to San Francisco Gate. A prior release on the website for the Anti Police-Terror Project — a Bay Area anti-racism group that helped organize the demonstration — called for 96 hours of direct action across the region starting on Martin Luther King Jr. Day.

"Over the last few years, we have seen San Francisco and Oakland destroyed by police murders, rising housing costs, rapid gentrification and apathetic city officials," the press release read. "Fifty-one years ago, those who came before us participated in direct action in Selma, Alabama, to speak out against the harms of racism and oppression.

"It is this very spirit of resistance that flows through our lives and actions."

The Anti Police-Terror Project also provided a list of demands, quoted below:

—The immediate divestment of city funds for policing and investment in sustainable, affordable housing so black, brown and indigenous people can remain in their hometowns of Oakland and San Francisco

The demonstration was framed as a response to the nonthreatening, colorblind, sanitized version of King that's presented to much of the American public.

"[What] we too often get is King positioned in holiday specials and commemorations as some kind of racial Santa Claus, and his birthday presented as the one day on our calendar designated for us to indulge in this kind of blind hope for racial justice," Jamil Smith wrote for the New Republic on Monday. "It allows those enemies [of King's goals] to ... insist that unless a black civil rights activist behaves like the King that they've conjured in their selective memories, then that activist isn't truly pro-civil rights."

Case in point: Conservative pundit Glenn Beck, whose recent attempts to appropriate King's legacy have bordered on the absurd. Before a rally planned at the National Mall — on the anniversary of King's "I Have a Dream Speech" in 2010, no less — Beck defended his plan to commemorate the speech, saying, "Whites don't own Abraham Lincoln; blacks don't own Martin Luther King."

"We're all the same," Beck added on his TV show last year. "We want to be seen. We want to be heard. We want a fair shake. [King] didn't say, 'I want stuff! I want equal stuff in my house that that guy has!' That's not what the message was. It was, 'Give me a chance. Let me prove myself.'"

Then in May 2015, Dane County, Wisconsin, District Attorney Ismael Ozanne quoted King in an effort to dissuade the people of Madison from reacting violently to the non-indictment of Matt Kenny, a police officer who killed 19-year-old Tony Robinson in March. "Violence never brings permanent peace," he said.

The Bay Bridge protesters — plus groups like the Black Youth Project 100, who hosted a series of actions and teach-ins over the weekend united under the tag #ReclaimMLK — hope to bring the more radical King back.

"We need to reclaim MLK — radical MLK," Janaé Bonsu, national public policy chair for BYP 100, told the Chicago Reader. "We don't talk a lot about how he believed there should be no poor people in this country. ... 2016 marks the 50-year anniversary of when he was here in [Chicago] organizing for affordable housing, quality education, quality schools, universal health care."

The broader, more intersectional politics King fought for flow through the veins of Monday's demonstrations. The hope is that someday, the dominant image of the man will reflect the nuance and radicalism that actually defined his life.