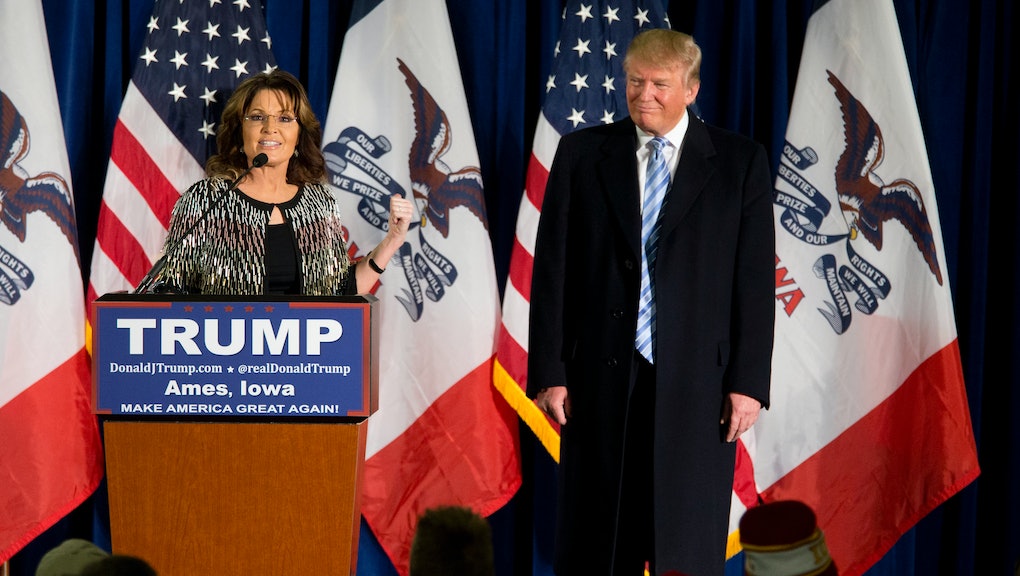 Former Alaska Gov. Sarah Palin threw her support to the Republican presidential frontrunner Tuesday in an appearance with Trump in Iowa, hoping to rally conservative primary voters to his cause. Her remarks hit on many of the same themes that made her such a sensation among movement conservatives when she was tapped to be Sen. John McCain's running mate in 2008.

Palin took the stage with a cheery poke at the media.

"I am here because, like you, I know that it is now or never. I am in it to win it because we believe in America," Palin said.

She made her case by drawing searing contrasts with the Obama administration, saying Americans would find in Trump "a new commander in chief who will never leave our men behind... who will never lie to the families of the fallen," compared to "a weak-kneed capitulator in chief [who] has decided that America will lead from behind."

Palin's support for Trump comes as he faces a serious challenge in the Feb. 1 Iowa caucuses from rival Ted Cruz. The Texas senator has sharpened his attacks on Trump — including lobbing attacks about Trump's "New York values" —  as the two duke it out for primacy in the Hawkeye State.

The background: Speculation had been mounting since Monday night that Palin would endorse Trump.

The Cruz campaign tried to get out ahead of the announcement. Campaign spokesman Rick Tyler, in a Tuesday morning appearance on CNN's New Day, said Palin would only hurt her image by latching on to Trump.

"I think it'd be a blow to Sarah Palin, because Sarah Palin has been a champion for the conservative cause, and if she was going to endorse Donald Trump, sadly, she would be endorsing someone who's held progressive views all their life on the sanctity of life, on marriage, on partial-birth abortion," Tyler said.

Palin's daughter, Bristol, fired back in a piece on the website Patheos, throwing Cruz's own words back in his face.

"You've also said, 'She can pick winners!'" she wrote in a barb aimed at Cruz. "I hope you're right, and that she endorses Donald Trump today for President."

Cruz sought to defuse the situation in a Tuesday afternoon tweet:

Soon after, Palin announced her intention to support Trump in a statement to the New York Times, saying she was "proud" to stand with Trump's campaign. Trump, in turn, called Palin "a friend, and a high-quality person whom I have great respect for."

His campaign noted Palin will travel with Trump in Iowa and Oklahoma on Wednesday, where they'll appear together at two additional events.

The endorsement: In her appearance with Trump Tuesday evening, Palin saluted the Iowans in the crowd as "teachers and teamsters, you cops and cooks, you rock and rollers — and holy rollers!" She delivered a sweeping endorsement of Trump as the man voters — if not the GOP establishment — need at a critical juncture.

Co-opting Obama's winning 2008 slogan, Palin said, "We are ready for a change. We are ready and our troops deserve the best — a new commander in chief whose track record of success has proven he is the master of the art of the deal."

"He is beholden to no one but we the people. No more pussy-footing around!"

Palin also gave Trump props for coming from the ranks of the private sector, not career politics.

"Isn't he known for being able to command?" she asked. "Are you ready for a commander in chief who will let our warriors do their job and kick ISIS' ass?"

Palin bestowed on Trump a mantle she herself once wore: "He's 'going rogue' left and right - that's why he's doing so well," she said, positively comparing him with those — including Republicans — who want to play it safe in the elections so they can keep "slurping off the gravy train that's been feeding them all these years."

In what could be her most useful play as a Trump surrogate, Palin railed against those making judgments about the campaign's conservative credentials, suggesting Trump's political rivals should rally around him and help push his agenda through Congress.

As for criticisms that Trump represents an angry sector of the electorate, Palin embraced those the charges.

"Doggone right, we're angry! Justifiably so!" she said. "We are mad and we've been had... It's time to stop the self-sabotage."