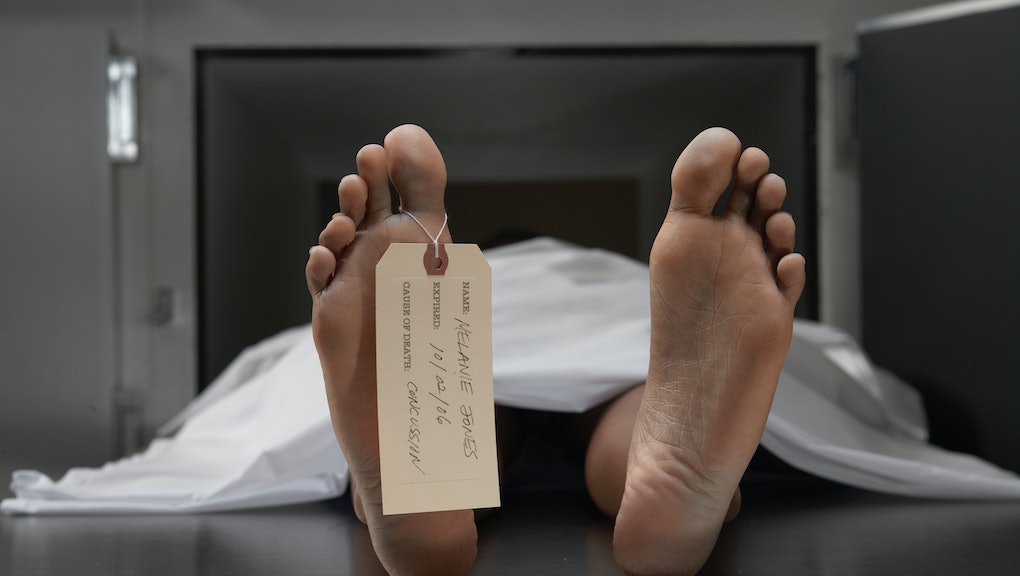 It's a fact we're all reminded of whenever tragedy strikes, or when we're lying awake at 3 a.m. after waking up from a nightmare: At some point, everyone we love will die. When that moment comes, be it the loss of an aging parent, a beloved celebrity or a friend gone too soon, we're struck with grief and often we don't know how to deal with it.

There are, however, some people who deal with death on a daily basis — as funeral workers, grief counselors, or postmortem investigators. Curious about how to deal with grief in today's society, Mic spoke to death midwives, or those who help usher dying people into the final stage of life.

Often hospice workers trained in caring for the dying, death midwives work with the dying individual and their loved ones to aid in the dying process. (According to this death midwife's website, costs vary between approximately $1500 and $3000.)

Also sometimes called an end-of-life guide, the role changes depending on a family's desires and needs: A death midwife can help with mundane tasks from sorting out medical bills, to helping wash a body should a family opt for an at-home-funeral, a term used to describe the rare practice of skipping the funeral home altogether and saying goodbye to a loved one at home. Death midwives and end-of-life guides pride themselves on being more "heart oriented" than funeral directors, which have been criticized for being more corporate-owned and clinical.

In addition to providing compassionate care in the form of, say, helping the dying create photo albums to honor memories, or helping with such practical matters as offering advice on handling medical bills, those in death work often answer blunt questions about the dying process— a natural part of life they feel is not openly discussed enough.

"You know how people say 'You need to process your grief?' I call bullshit on that. Have you ever heard anyone say, 'You need to process that joy you felt Christmas morning?'" death midwife Terry Skovronek told Mic. Skovronek has been a self-identified death midwife for 19 years, and considers the process of death comparable to the natural process of birth — just at the other end of the spectrum.

Skovronek got into death work after giving birth to her children. "I gave birth to my kids at home," Skovronek told Mic. "If something went wrong, if they died at birth or were born dead, I wanted to know what my legal responsibilities were."

Betsy Trapasso, who uses the title "end-of-life guide and advocate," told Mic that a death midwife can help "provide the vigil and post-death care, help the family and help folks wake up to and reconcile the fact that they are dying."

A death midwife "can take many shapes and forms, from helping someone who is dying face the issues they need to face, any work they want to get done before they die, any relationships they want to heal," Trapasso added.

Before transitioning into private practice and advocacy for the dying, Trapasso started out working in a hospice after obtaining a master's in social work. She's also worked as a psychotherapist, and says the frequency with which her clients brought up the subject of death let her know there was a professional void that needed to be filled.

"Before I did the death work I was a psychotherapist, and people would want to talk about death all the time. They'd want to know about what death was like," Trapasso told Mic.

What is death going to be like? It's a morbid question, but as Skovronek said, it's a natural one.

"[The dying] will say, 'What do you think is going to happen when I die? Explain to me what my breathing is going to be like, and do you think I'll start to see things?'" Skovronek told Mic. She compared the family members' hesitation to speaking about the death process to people's unwillingness to speak openly about sex.

"What's shocking is how little folks know. I [compare it to] the Victorian era, where a 17-year-old girl is married off never having had anyone explain anything to her about sexuality, or penises...imagine the terror [of] not knowing anything of the biology they were about to encounter of the experience. That's how most people are with death. They have no bloody idea."

Beyond the physical dying process, many people are unsure how to speak about the grief experienced by loved ones after a friend or relative has passed. When witnessing a friend or colleague dealing with a loss, the living can often find themselves at a loss for words.

People who are trained in grief counseling, like Trapasso and Skovronek, are well-equipped to deal with someone who has just lost a loved one. If someone in your office experiences a major loss, for instance, "sometimes your fellow coworkers are like, 'What do we say?' How do we act?' That's a huge thing," Trapasso told Mic. "What mostly everyone [families I've worked with] has told me is [to] just say, 'I'm sorry.' That's what people want to hear."

A kind, one-size-fits-all response of "I'm sorry" works so well because there's no one way to grieve. "Grief comes in all shapes and sizes and forms. People grieve differently, and that's what's important for people to realize," Trapasso added.

Some mourn outwardly, from sobs to an abundance of shared Facebook posts. Others are too hit with shock to respond in a visibly mournful fashion. Others need to keep themselves busy – and all of those reactions are healthy and OK. It's not everyday that we are faced with death up close and personal - so what can we learn about grieving from those who do daily as a profession? "Just say, 'I'm sorry.' That's what people want to hear."

"The important thing for people to know is that it's different for everyone. You just have to be supportive for the person and really just being there and being present and let them express what they need," Trapasso told Mic.

Generally speaking, our impulse as a society is to push away ugly and unwanted experiences such as dying and death as a way to alleviate the mourning process. But the death midwives Mic spoke with said that when dealing with loss, it can often be healthier to give your grief space to breathe, rather than race toward an unseen end point.

"It's like when you have a quarter in your pocket, this little thing that you rub up against, and maybe you twirl it in your fingers. Wouldn't it suit us if grief was like that, this little thing that we can carry in a small way close to our bodies? [Something] that doesn't dominate our experience, but we revisit it now and again?," Skovronek said. "I'm not saying one should live in discomfort, but one should feel appropriate to have room for [grief] ... we are denying ourselves a significant part of our humanity if we are tolerant of only half of the range of human experience."

"We are denying ourselves a significant part of our humanity if we are tolerant of only half of the range of human experience."

Technology is also changing our relationship with death. Facebook, for instance has become a place where we can share memories and mourn loved ones; often the deceased's page turns into a memorial, a place to share memories and grieve. According to Trapasso, technology's new role in the grieving process is ultimately a good thing, in that it provides a venue for people to share their grief with each other.

"With [the loss of] a friend, you can all share their story, and honor their life, because we always want to feel like we're part of something. I love it, because for so long I saw people suffering alone," Trapasso told Mic.

Nowhere was that grieving process brought into sharper relief than in the week following the death of David Bowie. During the week of Jan. 10, social media seemed to take a momentary pause from political posts and New Year's resolutions, instead becoming flooded with Bowie hair GIFs, thinkpieces on the icon's impact on gender roles and music videos from the star's career.

Aside from allowing us to join in the shared mourning process over the death of an icon, the response to Bowie's death suggests that collective mourning might fill a crucial void in our society, Skovronek said.

"I think we bond to these experiences so strongly because we are so eager to have a communal experience of death and we don't have it anymore," she said. "So it's almost like...it's a gift when one of these things happen."