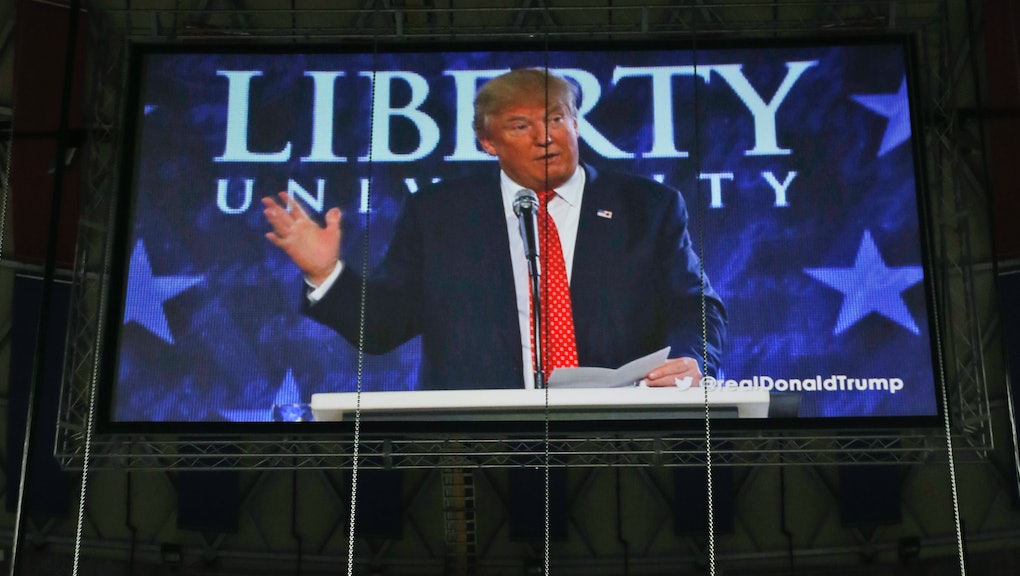 It is no longer an exaggeration to call Donald Trump's efforts to win the evangelical vote a "battle." The Republican frontrunner himself seems inclined to agree, telling the Christian Broadcasting Network's David Brody that Christianity is "under siege."

"You look at Syria, where they're chopping heads off, specifically of Christians, and others," Trump told Brody during an interview Monday at Liberty University in Lynchburg, Virginia. "And Christianity is under siege, David. As you understand well from covering it. And we have to do something, we have to band together, we have to become stronger as Christians because it's very bad what's happening with respect to Christianity. We're not banded together properly."

This isn't the first time Trump has taken an alarmist tack in addressing his faith. He gave a speech Monday — again, at Liberty University — in which he promoted his Presbyterian faith and stressed the necessity for all sects of Christianity to come together to protect their faith.

According to CNN, his statements about safeguarding Christianity generated the loudest applause from his audience of around 10,000. This despite a few faith fumbles, including a misspoken Bible reference and use of the word "hell," which is prohibited under Liberty's code of conduct.

Still, Trump's attention to the religious right is paying off. According to the most recent New York Times/CBS News poll, he leads his major rival, Texas Sen. Ted Cruz, 42% to 25% in the contest for the evangelical vote. Although Trump has recently pushed his "great relationship with God," as the Times reported, it seems to be more Trump's strength of will than his religious conviction that's swayed this demographic in his favor.

"Spirituality is a big issue, but we need somebody who's strong," one devout voter told the Times. "Lots of times the preachers and everything, they have a tendency to be just a little bit weak."

"None of us know if there really is a God, you just hope there is," a Methodist voter said. "If he was an avowed atheist, then I would know he was crazy."

As Liberty University president Jerry Falwell Jr. put it, it's the fact that Trump "speaks the truth publicly, even if it is uncomfortable for people to hear" that is gaining him ground with the country's evangelicals.