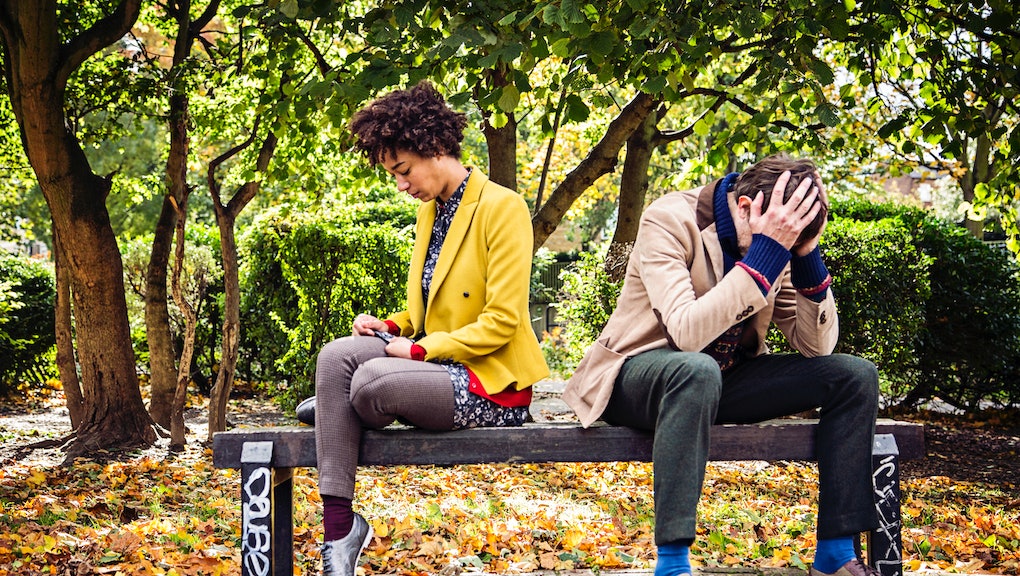 This Is What Breaking Up Looks Like, According to Your FitBit Data

Breakups suck, and now we have yet another way to prove it.

Koby Soto, 28, took to Twitter on Tuesday to post what he said was a screenshot of his FitBit data after a breakup with his then-boyfriend. With a bright red arrow — like Cupid's, in happier times — Soto pointed to the spot at which the breakup occurred.

You may not be surprised at what happened to his heart rate immediately afterward, but we bet it'll make you sad:

According to the data, Soto's heart rate stayed relatively consistent from about midnight to noon. Once noon hit, however, it spiked — and spiked, and spiked and spiked.

Soto, who lives in Tel Aviv, Israel, told Mic via email that he didn't even notice the jump until later that night.

"I was unraveling at bed, at 12 [midnight]," he said. "I texted my friend, 'I can't fall asleep,' and wanted to send him my current heart rate. Then I saw this graph and was amazed.

"I've only used FitBit to track my workouts. So even if [this had happened to me before], I didn't notice."

The breakup, he said, was a painful experience. (Cue a thousand people nodding their heads in unison.)

"It happened on Saturday," Soto, who is in law school at Tel Aviv University, told Mic. "We are both studying on exam period and we were meant to take a break and go on a 'date night,' but he called to cancel and said things are not working out for him." They had been dating for a little less than a month, he said, but "it was intense, as we met almost every day."

"I thought geeks would like the data point of view of it," he told Mic. "I never expected this response."

As it turns out, Soto's unfortunate heart-rate-related experience may not be all that rare.

"Broken heart syndrome" is real: "An upsetting breakup can cause the body to produce more cortisol (the stress hormone) and adrenaline (the neurotransmitter associated with the flight or fight response)," Gail Saltz, a clinical associate professor of psychiatry at the New York Presbyterian Hospital Weill-Cornell School of Medicine and a specialist in mental health and relationships, told Mic in an email. "Sudden increase in adrenaline can raise heart rate and blood pressure."

Previous research backs this up. According to the Harvard mental health letter, stress — the kind associated with a breakup — can trigger all sorts of nasty physiological responses in humans:

"After the amygdala [an area of the brain that contributes to emotional processing] sends a distress signal, the hypothalamus [an area of the brain that helps control involuntary body function] activates the sympathetic nervous system by sending signals through the autonomic nerves to the adrenal glands. These glands respond by pumping the hormone epinephrine into the bloodstream. As epinephrine circulates through the body, it brings on a number of physiological changes. The heart beats faster than normal, pushing blood to the muscles, heart, and other vital organs. Pulse rate and blood pressure go up."

While these symptoms are usually only a problem in the short term, the American Heart Association cautions that so-called "broken heart syndrome" — also known as stress-induced cardiomyopathy or takotsubo cardiomyopathy — is definitely a real thing.

"Women are more likely than men to experience the sudden, intense chest pain — the reaction to a surge of stress hormones — that can be caused by an emotionally stressful event," the AHA writes. "It could be the death of a loved one or even a divorce, breakup or physical separation, betrayal or romantic rejection." In addition to the agony of getting over your ex, broken heart syndrome also heaps on chest pain and shortness of breath.

Soto, for his part, wasn't sure whether his ex had seen the data, but he told Mic he wasn't even sure if he wanted him to.

"I don't know how I feel about him noticing it," he said. "Maybe he'll rethink the breakup. That is just me being pathetic. I am still sad about it."

Trust us, dude. We know. Breaking up is hard to do.