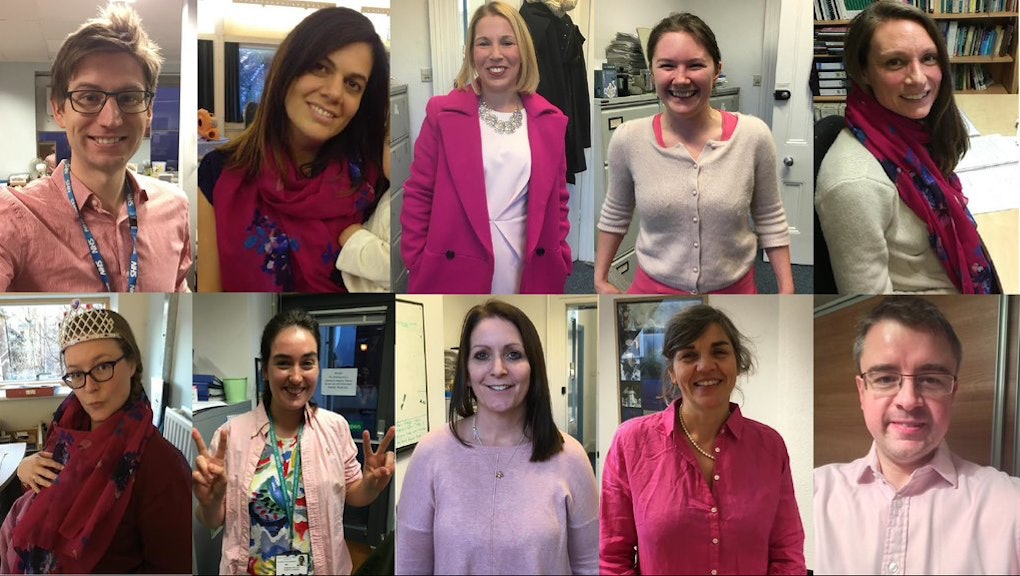 Doctors Are Fighting Sexism in Medicine With #PinkWednesday Selfies

The Sunday Times published a column by English journalist Dominic Lawson, elder brother of Nigella, with the headline "The One Sex Change on the NHS [National Health Service] That Nobody Has Been Talking About." (Yes, really.) In it, Lawson argues that the problems facing Britain's health care system are the fault of female doctors who prioritize their families over their work. Male doctors, he said, will work longer hours because they're not as tied down by family, thereby saving the NHS money.

Unsurprisingly, the piece was slammed for its sexist and backward attitude toward gender and the workplace.

The most powerful response, however, came from the very same community Lawson set his sights on: doctors. Using the hashtag #PinkWednesday, doctors from around England on Wednesday posted selfies wearing pink, often accompanied by messages of encouragement for female doctors.

The #PinkWednesday hashtag comes on the heels of the #LikeaLadyDoc hashtag, which similarly lambasted Lawson for his, uh, old-fashioned values.

According to Mashable, both hashtags originated with Roshana Mehdian, an orthopedic surgeon.

It's "a response to Dominic Lawson's article in the Sunday Times, which conflated the issue of female doctors and the junior doctor strike," she told Mashable. Britain is facing the threat of strikes by junior doctors, who say the guidelines of their new proposed contracts — including wage adjustments — are unfair.

"He suggested female doctors are a problem in modern medicine, a comment which belongs in the 1800s, not in this century," Mehdian said. "Women in medicine are surgeons, physicians, leaders, college presidents, whilst also often being wives, daughters, mothers, sisters. The fact that women achieve and contribute so greatly to medicine is nothing but a celebration for the profession."

The selfies aren't just reserved for women doctors, however — their male counterparts have also jumped in on the action.

"Of the 300 or so doctors I know, only one works part-time because of child care; every other female doctor I know with children works full time," a female cardiologist said. "It's insulting to suggest that caring about your family means you are less dedicated to your career ... Fortunately, in the NHS, our attitudes towards women are not from the '70s."

Besides conflating the issues of gender in the workplace and doctor strikes — and blaming women for both — Lawson writes that "family life [is] an institution to which men tend to pay homage but that women are actually more likely to put ahead of their career," but never once delves into why that might be the case.

Societal, professional, family and personal pressure — women are supposed to "have it all," remember? — are all at play, but Lawson's essay criticizes women for having the audacity to have both a family and a career.

Thankfully, doctors around the world are taking a stand.

"We've had as many men posting themselves wearing pink as women ... doctors from across the world as far a field as Australia joining in," Mehdian told Mashable. "The response makes me feel very proud to be part of the profession."