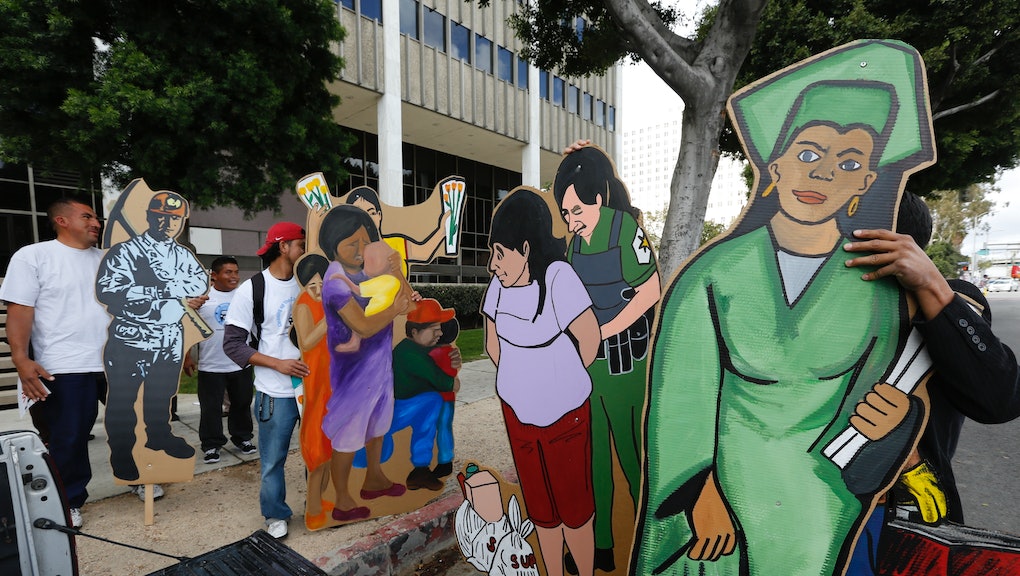 What Does a Latino Electorate That's Half Millennial Mean for the 2016 Election?

For presidential hopefuls hoping to woo millennials and Latinos, it turns out that those voting blocs may have a lot in common.

In this election cycle, the number of eligible Latino voters will reach 27.3 million, a record number, up by 3.2 million voters since 2012. According to new data from the Pew Research Center, almost half of these voters — 44% — are millennials, a much higher percentage than any race or ethnicity when broken down by generation.

Of course, between eligible voters and turnout, there is a chasm that happens to be pretty wide in the Latino community. Herein lies the conundrum: If Latinos vote at lower rates than their black and white counterparts, and Latino millennials vote even less, what does it mean that millennials comprise almost half of the Latino electorate? And how, if at all, are candidates attempting to court this coveted demographic?

Latino voter turnout is low, but when divided into subgroup, the reality is even worse for Latino millennials. Only 36.9% of Latinos aged 18 to 29 voted in 2012, compared to an overall voting rate of 41.2% for all millennials, regardless of race. Overall, during the 2012 election, Latinos made up 17% of the U.S. population, but constituted only 8.4% of voters.

Just like most millennials, young Latino people would rather talk about issues than a particular candidate. Matt Nelson is the managing director of Presente, an organization dedicated to amplifying Latino voices politically, culturally and socially. He told Mic that while Latino millennials are a coveted voting bloc, they should not be considered a monolith. To illustrate the point, Nelson said you only have to look at the varied movements Latino millennials have played a strong part in — education reform, Black Lives Matter, queer rights, immigration reform and prison reform are just a few.

"Latino millennials have really helped define the new era of what we think about and what we look to in terms of building strong social movements," Nelson told Mic.

According to a recent episode of NPR's Latino USA, women's rights also mobilize the Latino vote. Voto Latino president María Teresa Kumar told NPR, "[Latinas] are more likely to register and vote if, at the local level, there is a woman's right to choose on the ballot."

Kumar also brought up another women's issue that is important to Latinos: While many cite that women make less than men, they forget that Latinas earn on average just 55 cents to a (white non-Hispanic) man's dollar.

However, Nelson said, we have yet to see "if Latino millennials will pivot and will show an aspect of the power and voice that they've built in the last decade. Will that translate to going to the polls?"

And would that make a difference? Despite the low voter turnout, Pew called young Latino voters "an important part of the coalition" that re-elected President Barack Obama. Seventy-one percent of Latinos who voted favored Obama, compared to 27% who supported 2012 Republican presidential candidate Mitt Romney.

Of course, in order to draw them to the polls, Latino millennials and the issues for which they fight must be seriously addressed. So far, both parties have faltered when it comes to any serious acknowledgement of these voters. Hillary Clinton made headlines when her campaign published an article comparing her to Latino voters' abuelas. This move was considered not only tone-deaf and pandering, but also patronizing to Latino millennials rather than engaging them. The subtext behind #NotMyAbuela wasn't so much a personal attack on Clinton, but rather a reminder that she doesn't need to be our grandmother to be loved — she needs to engage Latino voters in a substantive way.

Of course, Republicans have mobilized Latino voters, but usually in opposition to the vitriol Republican frontrunner and business mogul Donald Trump espouses in his speeches. Movements like #ImNotaCriminal, open letters from America Ferrera and videos showing undocumented Latinos speaking out show that Republicans are also missing the mark among the young Latino population. Rhetoric that paints Latinos as rapists, violent criminals or freeloaders directly insults both Latino millennials and the family members they fight for.

Nelson said that candidates have also yet to acknowledge the tough work of Latino millennials that has actually been a huge part of the Democratic Party's documented leftward shift.

There is a laundry list of reasons why Americans don't vote, and many of those disproportionately affect Latinos: lack of transportation to vote, lack of time to vote and the registration process. And, of course, there are racist voter ID laws.

But there are more than structural factors. So far, this election cycle has seen the candidates work to alienate, rather than embrace, Latino voters. On the right, there's vitriol and on the left, there's infantilizing and pandering.

But, as is evident from the current cycle, no one seems to be speaking Latino voters' language: issues-based action, that is.