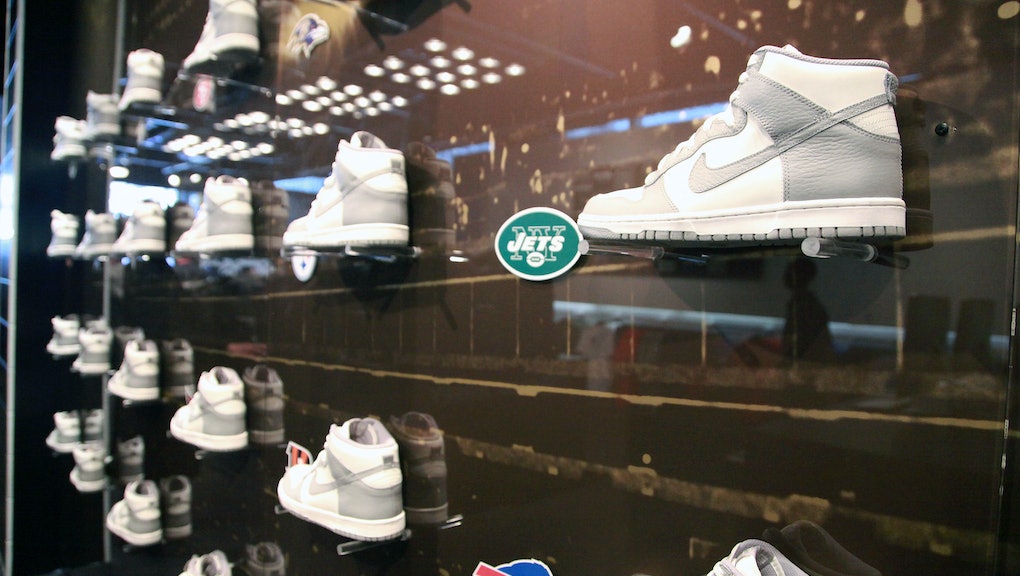 Sneakers, in theory, should be our most gender-neutral shoe. They're made of versatile fabrics, available in countless colors and can be worn with pretty much any outfit. After all, sneakers were originally created for sports, which women can do just as well as men, right?

Oh, right — sexism. Forgot about that.

Just like in sports, women don't exactly get equal treatment when it comes to sneakers. That fact was abundantly clear thanks to a series of tweets posted Tuesday by self-proclaimed sneakerhead Alanna Vagianos.

Vagianos, who is also an editor at the Huffington Post, ordered a pair of Adidas high-top Superstars... only to open the box and find they had heels.

The heels are internal wedges, which aren't immediately apparent when you first glance at the sneakers but are an increasingly popular feature, thanks to Nike and high-end designer Isabel Marant.

But for female sneakerheads, wedge heels have never been necessary. Sneakers should be for everyone — without needing to be feminized, as Vagianos pointed out on Twitter:

Vagianos told Mic that finding cool new sneakers that haven't been given a "lady-friendly" makeover is a challenge.

That leaves female shoppers with far fewer options, as well as the annoyingly patronizing experience of being offered pink, purple and heels again and again and again. It speaks to the fact women and their actual preferences have long been overlooked by sneaker companies.

"When Nike dropped its own rendition of sneaker wedges, the Dunk Sky-Hi, I felt offended," Anna Bediones, a stylish and respected sneakerhead blogger, told Complex.

Most egregious is how women are ignored when it comes to the actual holy grail of sneakers: the limited editions.

"I buy boys' shoes because I can, and because they are significantly cheaper," Meredith Fineman wrote in a blog post called "The Pinking of Women's Footwear: Sneakers." But to get something rarer, cooler or more of-the-moment in a reasonable size is next to impossible, she said. "There are a lot of women that follow sneakers closely, myself included, but we can't buy limited editions," she wrote.

"In my experience, most of the big releases (Yeezys, Sam Smiths, new Jordans) are marketed towards men and usually only created in men's sizes," she told Mic.

There's nothing wrong with wedge sneakers — in fact, for some women, they've been a bit of a gateway drug into sneaker culture, Jason Faustino, co-owner of New York-based sneaker boutique Extra Butter, told Complex. But there are plenty of women who want exactly what the men have: countless options, of all the newest styles, without designs that have been tailored to the gender.

"There are a lot of women that follow sneakers closely, myself included, but we can't buy limited editions."

Sneakers are massive industry, with $34 billion worth sold in the United States in one year, and the sneaker companies say they want to target female shoppers more. If so, they could start by catering to the women who've been loyal sneaker fans this whole time.

"The fact that I have to adapt my style to what sneaker companies offer is more than disappointing," said Vagianos. "I am obsessed with sneakers, yet I don't really have an overflowing amount of shoes the way most sneakerheads do."