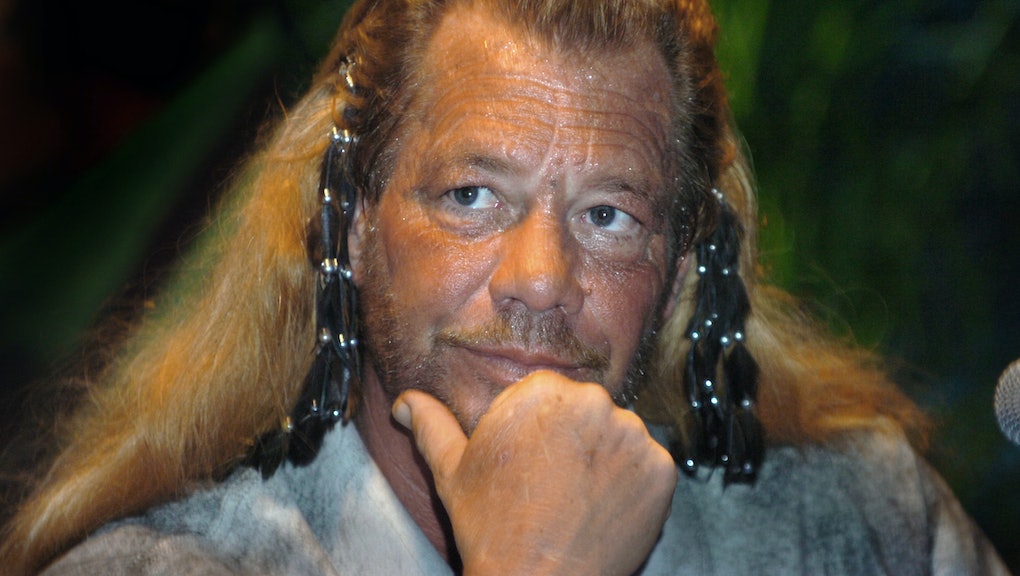 When it comes to the heated discourse between Democrats and Republican, few things are as contentious as the fight to destroy ISIS. But though the debate has exhausted a plethora of solutions, one non-partisan answer is conspicuously missing from the fray.

"If I have the backup of the United States, I'm going," Duane Chapman, better known to America as "Dog the Bounty Hunter," told Mic. "We are definitely in a war with these guys."

Though he warned that it would be a heavier lift than domestic bounty hunting, Dog, who achieved notoriety with his popular A&E television series, told Mic, should the government come calling, he would be up to the job of destroying ISIS with his bare hands.

Picture it: Syria, 2016. Dog parachuting into Raqqa to take out ISIS chief Abu Bakr al-Baghdadi and his associates one by one. It wouldn't be his first time launching an international raid. In 2003, the bounty hunter, with a camera crew in tow, staged a successful assault in Mexico against the Max Factor cosmetics heir Andrew Luster.

"I had to hunt [Luster], a fugitive, in an unknown country. I barely speak enough Spanish to get by. It was very difficult," he said. "I ended up having to hire prostitutes and local guides."

Luster, who Dog found hiding out in the resort city of Puerto Vallarta, was ultimately convicted of rape and other sexual assault charges.

In 2005, an internet campaign called on the bounty hunter to find Osama bin Laden, a task he also says he would have been up to. "I said I need 300 Marines, and I'd have him in two weeks," Dog said of the missed opportunity to seize Al-Qaeda's kingpin.

Of course, it wasn't Dog that kicked down the doors of Bin Laden's secret hideout in Abbottabad, Pakistan, stormed the compound and shot and killed the FBI's most wanted man in May 2011. That credit goes to SEAL Team 6.

But ISIS, now widely perceived as the U.S.'s biggest terror threat, is still at large — and so is the opportunity for Chapman to intervene.

On Wednesday, in a phone call with Mic, Dog gave us a play-by-play on how he'd take out the head of ISIS — if only our government would give him the chance.

And we're warning you, the Dog Way isn't pretty. "The first thing [our team] would do is find out what areas he is in and then we would find people that would be able to talk. We would offer money and things from America," he said. "We would find out his enemies. Everyone has enemies."

Once a target is located, he said, it is just a matter of flooding the zone. "We'd send different people in that area inside like a building."

Dog even has a tailor-made plan to incorporate the local culture, specifically citing the Muslim aversion to pigs.

"They're afraid of pigs and pig blood and that stuff as much as we were afraid of AIDS in America back in the '80s," he said. "I would use that. I would say to a potential lead, oh you don't know where they're at, then you can just drink a glass of that pig's blood."

But with pigs potentially in short supply in the ISIS capital, Dog suggested using American wild boars. After all, he said, "they hate hogs and pigs almost as much as they hate Americans."

And while he said it would take 300 Marines to take down Bin Laden, destroying an increasingly global force like ISIS would require another method.

"It's just like with organized crime, street crime, like bikers, you get the leader, they pass it to vice president," he said. "You have to take the top five of six completely out, like the old Indian saying, cut off the head and the snake dies."

But Dog's cartoonish — and often ill-informed — stratagem aside, one fundamental question remains unanswered: Could the U.S. government use bounty hunters, working on the cheap, to dispatch our enemies one-by-one? Instead of bombs and armies, could empowering private citizens with the volition — if not the specialized training — be the solution, however unconventional, that's been staring us in the face the whole time?

It's not just one of those ridiculous ideas that may be "crazy enough to work" — experts told Mic...

It may be constitutionally sound. America's founding document spells it out in Article I Section VIII, in a discussion on the powers of Congress:

The Congress shall have Power ... To declare War, grant Letters of Marque and Reprisal, and make Rules concerning Captures on Land and Water.

The aforementioned Letters of Marque and Reprisal, issued by governments, gave private citizens the authority to prowl the high seas in search of enemy vessels. The methods were simple: find and capture a ship, give a small slice of the bounty to the government, keep the rest.

In the War of 1812 the letters were frequently held by zippy schooners, most often targeting British merchant ships, and were last used during World War II when they were issued to a Goodyear war blimp in 1941 (though that account has been disputed).

"It goes back to the Elizabethan period." Navy Capt. C. C. Felker, a professor of naval history at the United States Naval Academy, told Mic. The maneuver, he said, leveled the playing field for cash-strapped nations facing bigger and better-equipped sea powers. Fighting under letters of marque was risky, but could mean huge bounties to those who got the job done. In Europe, the practice was abolished in the 1856 Treaty of Paris.

But the United States never signed the treaty.

Dog is not the only one saying it might be time to bring back the old ways. In recent years, the idea has gained traction among constitutional traditionalists.

"Letters of Marque and Reprisal do have a good place or a role in fighting terrorism," Dr. Mark Thornton, an economist at the free-market Ludwig Von Mises Institute, told Mic. Thornton advocated an expanded definition of the original document which limited hunters to sea warfare. "Instead of sending in an entire army, simply put a bounty on the head of whoever was leading these various terrorist groups."

In other words, if bounty hunters like Dog did put some skin in the game, it would not only have legal precedent; It could, in fact, be America's most constitutional option for fighting terror.

"It would be a novel extension of a constitutional concept, which was originally a way to police the seas," Peter Rajsingh, a professor of finance and constitutional law at New York University, told Mic. "What needs to happen is that essentially we need to get some bounty hunter involved and get it tested in international criminal courts."

Indeed, the possibility was raised in 2001 when then-Republican Congressman Ron Paul introduced a bill to reauthorize the letters to fight Al Qaeda in Afghanistan. The bill went nowhere, but Paul remained committed to the option, which he again tried to resurrect in 2007.

"The Letter of Marque and Reprisal is something that the Congress issues and it gives private sources the authority to go and do the job and get rewarded for it," he said at the time. But again, said Congress, no dice.

And maybe that's for the best. Rajsingh and other experts warned that going this route would at best be difficult, at worst an anarchic, bloody disaster.

"We do have constitutional and historical precedents, but at the same time, how advisable would it be to provide people with carte blanche hunting licenses remains an open question because of the unforeseen potential collateral negative effects?" he asked.

Felker, too, warned that reintroduction could also run afoul of international law. "You cannot arm a civilian merchant anymore," he said. "There's all kinds of legal issues involved in that." He also dismissed the ideas of bounty hunters like Dog, saying they were certainly "outside the laws of war."

So in short, it would require specialized training. It would be difficult. And while it just might be the most constitutional approach to stopping ISIS — it could also be illegal.

But as long as Dog and others in the bounty hunting business exist, the option will always be there. And believe it or not, a bounty hunter has the best shot at success not via threat-making or blood-shedding, but a tactic far less obvious: killing your mark with kindness.

"I've had killers in my car ... A cigarette and a 'please' is a lot better than water dunking," said Dog. "The secret to bounty hunting is being nice."