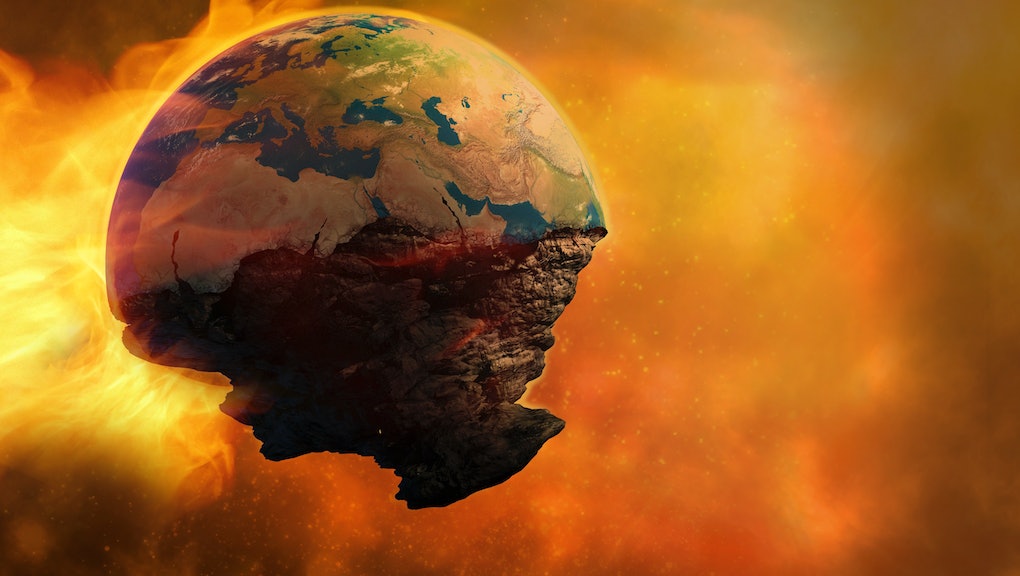 2015 Was the Hottest Year in Recorded History, NASA Warns

Are you cold? Is that looming snowstorm making you shake in your Uggs?

Enjoy it while it lasts.

Earth just set a terrible record. The U.S. National Oceanic and Atmospheric Administration and NASA just announced that 2015 was the warmest year on planet Earth recorded in the 136 years such records have been kept, CNN reported. The 2015 record shatters a record set just last year by 2014, and the competition wasn't even close — 2015 was 1.62 degrees Fahrenheit above 20th-century averages, or "more than 20% higher than the previous highest departure from average," CNN reported.

"2015 was remarkable even in the context of the ongoing El Niño," an irregularly occurring weather phenomenon that warms the tropical Pacific Ocean off the coasts of Peru and Ecuador, Goddard Institute for Space Studies Director Gavin Schmidt said in a statement on NASA's website.

"Last year's temperatures had an assist from El Niño, but it is the cumulative effect of the long-term trend that has resulted in the record warming that we are seeing," Schmidt said.

According to NASA, the planet's surface temperature has risen by an average of 1.8 degrees Fahrenheit since scientists began accurately measuring global temperatures in the 1880s.

This should shut the climate skeptics up once and for all. Climate scientists told Mic that while surging temperatures across planet Earth in 2015 are alarming, they align with scientists' predictions on the effect of greenhouse gas emissions. They also said Earth's hot year in 2015 should be the final blow to global warming skeptics.

"Warming is proceeding pretty much as expected," Pennsylvania State University geoscientist Richard Alley told Mic via email. "What I've seen of the projections on which the [United Nations'] Intergovernmental Panel on Climate Change relies ... is that, given a fair accounting, they are proving to be accurate within the stated uncertainties, with no strong reason to believe that there is any notable bias in the models or their projections."

Kevin Trenberth, a senior scientist at the USA National Center for Atmospheric Research, told Mic that even accounting for the effect of El Niño, the measurements "would make 2014 and 2015 the warmest years on record.  This is very much in tune with what the models have been suggesting and wipes out as silly all the suggestions that were made that there was no global warming because of the pause in the rise of GMST (global mean surface temperature) called the 'hiatus.'"

"Yes, this is indeed a big deal," PSU climatologist Michael E. Mann told Mic. "As I've noted elsewhere, the likelihood that two consecutive record-breakers would have happened by chance — in the absence of global warming — is less than 1 in 1,000."

Earth's hot year in 2015 should be the final blow to global warming skeptics.

"Despite the continued false claims by climate change contrarians to the contrary, the globe continues to warm at the rate that the models predict it should be warming given our ongoing burning of fossil fuels," Mann added.

In other words, not only was 2015's record predictable, it's a milestone toward the unpleasantness that could await us in the future. With fossil fuel use still increasing globally, and cheap oil prices likely to add fuel to the fire, 2015 might not even hold the record for much longer.

And if nothing changes, the world won't be ready. Humanity is already facing some of the costs of a warming globe, but it is far from prepared for a planet with a much warmer climate, Alley said.

"[T]he costs of global warming, the damages and other problems, rise faster than the temperature does," Alley cautioned. "The first degree of warming is low-cost; we've dealt with a range of conditions before, and one degree hasn't shifted us too far. But, in round numbers, we've already used that low-cost degree. ... The second degree will cost more than the first. ... We're probably committed to that second degree, or fairly close to that. The third degree will cost more than the second, and we're discussing what to do about that."

"The likelihood that two consecutive record-breakers would have happened by chance — in the absence of global warming — is less than 1 in 1,000."

Mann said that unless humans collectively work to reduce their impact on the environment, 2015's record temperatures won't even be the new normal.

"The bad news is that it's worse than a new normal," Mann warned. "If we continue to burn fossil fuels at current rates, then there is no normal. Temperatures that were once unprecedented will become commonplace. And the new temperature records will have no counterpart, no analog, in human existence."

"What we've seen so far is the veritable tip of the iceberg," he concluded, "hence the urgency of acting now."