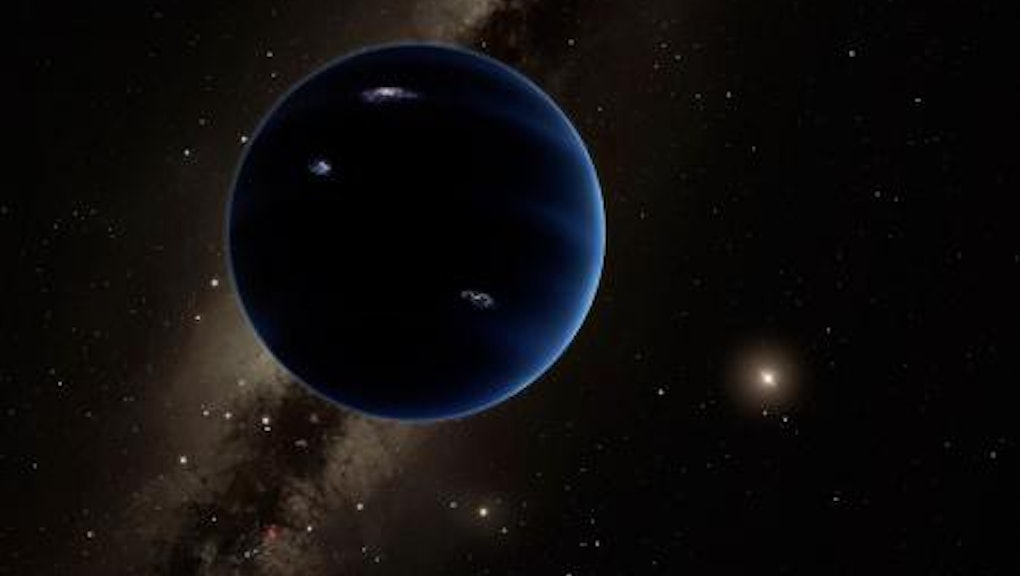 There May Be A Giant Ninth Planet, Called "Planet X," In Our Solar System

Sorry, Pluto but there's a new kid in town. On Wednesday, two scientists published a report in the Astronomical Journal about newly discovered evidence of the ninth planet, dubbed "Planet X" or "Planet Nine," in our solar system. According to a press release from the California Institute of Technology, where the research was conducted, astronomers Michael E. Brown and Konstantin Batygin have yet to locate the actual planet, but argue for its existence because they have observed odd behaviors of six small orbiting bodies far away on the Kuiper Belt, an elliptical plane that houses celestial bodies like Pluto.

These bodies loop outward in the same quadrant and at about the same angle but never collide, which is extremely rare, according to the New York Times. According to the astronomers, the best explanation for this gravitational pull is a big, unknown planet. The ice-cold planet would be the fifth-largest, at about two to four times the diameter of Earth, according to the Washington Post. It would also be at least 20 billion miles away, which means it would take between 10,000 and 20,000 years to orbit around the sun. It takes Earth just 365 days.

"For the first time in over 150 years, there is solid evidence that the solar system's planetary census is incomplete," Batygin said in the press release.

The scientists believe that Planet X was thrown into deep space by Jupiter or Saturn a long time ago, according to the Washington Post. Brown and Batygin have been looking for the planet for "a while now," and know "its path, but not where it is on that path."

Brown and Batygin actually started their research as a way to debunk Planet X. The theory Brown and Batygin were trying to debunk was from Scott Sheppard and Chad Trujillo, who first published the idea in 2014. Brown told the Washington Post he and Batygin "thought their idea was crazy," but used mathematical formulas and computer models to find that Sheppard and Trujillo's proposal was not so preposterous after all.

Brown is a pro at planet debunking, since he's the astronomer behind the 2006 demotion of Pluto to a dwarf planet. (He carries the reputation well, tweeting under the handle of @plutokiller.)

On Wednesday afternoon, Brown tweeted that the paper was not officially published, but also a tongue-in-cheek reference to his newfound belief that the solar system does have nine planets.

"There is no planet found. It's all circumstantial evidence," Sheppard said, according to WKYC.  "It's like we're at a crime scene looking at the blood on the wall, and we're trying to explain how the person died." But still, he added, there's basically no other explanation for those orbits. He thinks the odds of finding the planet is 70%.

If scientists find this planet, it would be the third true planet found since ancient times, according to NBC.