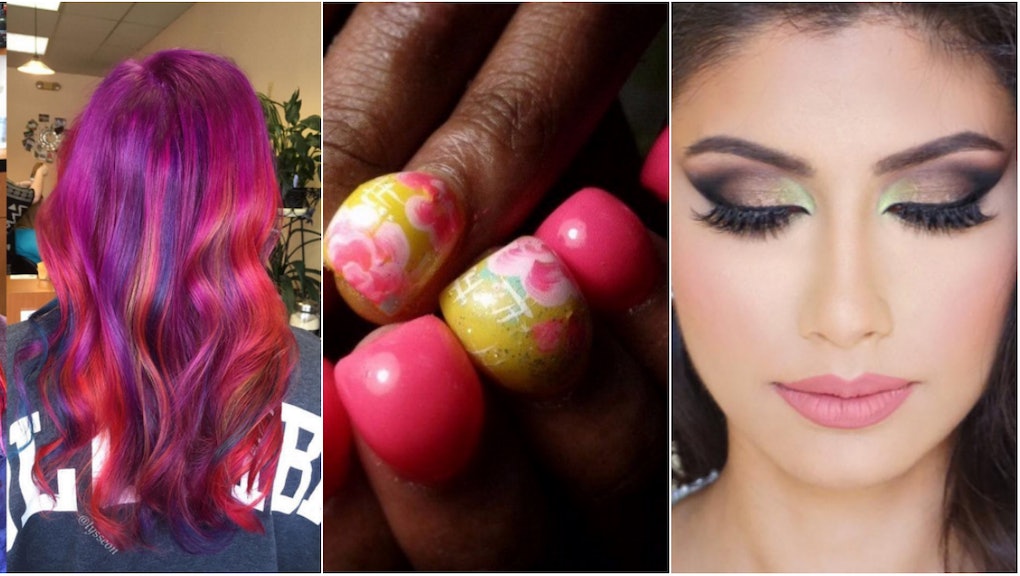 These Instagram Beauty Trends May Not Be Great for Your Body

If 2015 was the year we fell hard for eye-catching beauty trends on our Instagram feeds, 2016 is the year we get savvy about our suspicions: Not everything in our feeds is as easy — or safe — is it appears.

We saw the terrifying and obviously dangerous #KylieJennerLipChallenge go viral, as well as the rest of the Kardashian clan proclaiming their obsession with waist training, a trend many health experts consider unhealthy, risky and ineffective.

But there are other eye-catching trends that, while obviously threatening, we've always had the creeping feeling could use a closer look. So we dove into the fine print on a few of the most viral hair, makeup and nail trends of the past year — because hey, a little skepticism about what you see online isn't a bad thing.

Bubble nails are asking for (toil and) trouble.

The bubble nails trend isn't just weird looking, it's potentially yucky. Dana Stern, a New York-based dermatologist and nail specialist, told Mic the trend has several potentially harmful consequences. "As with any acrylic, artificial nails can have gaps that can create warm, moist openings where bacteria can collect and infections can develop," she said.

Because bubble nails are exceptionally thick, spotting a new potential infection under the nail is much more difficult.

Another major concern, Stern said, is thicker nail enhancements make nails heavier and stiffer and thus prone to onycholysis, a nail disorder that leads to the separation of the nail plate from the underlying nail bed. Thicker acrylic material makes removal more difficult and therefore increases the likelihood of nail damage.

Why? For starters, chances are you're probably not a Kardashian. While Kim may get away with heavy makeup to face paparazzi flashbulbs (or take the perfect selfie), she also has a team of makeup artists and experts to ensure she keeps her skin super healthy.

Contouring, as well as "strobing" and "baking," require layers of makeup. Layers and layers and layers. And wearing that much while sweating from exercise (or, y'know, running to catch a bus) is a no-no that countless dermatologists have advised against. Going to sleep with that much makeup on is ill-advised too.

"My professional advice would be not to wear makeup at the gym or for other sweat-inducing activities," Julie K. Karen, a Manhattan, New York-based dermatologist, previously told Mic, "as there is a real potential for clogging of the pores and possible aggravation of any underlying conditions such as acne."

In short, you have to be extra vigilant about spreading it on and taking it off (read: No being lazy). Just take it from renowned makeup artist Bobbi Brown. "When I see contouring on people's faces, it looks like dirt," Brown told the New York Post. "We don't need to be contouring like the Kardashians."

Is losing your real eyelashes worth having fake ones?

Lisa Opie is the founder of the fashion and lifestyle blog Lady Code and a frequent fake eyelash user. But Opie told Mic that eyelash extensions – which involve technicians applying large synthetic lashes to each of your individual eyelashes with glue – irritated her eyes, and after six months she had them taken off.

"When they were removed, I noticed breakage and damage to my natural lashes, something I am still trying to recover from five months later," she said.

Fake lashes — which don't need to be applied by a pro — are easier, said Opie, but they do require an adhesive, aka glue. Some glues have been found to contain formaldehyde, which can cause allergic reactions or in extreme instances, cancer. Also, they can just be plain painful.

"The glue is horrible for your lashes," Opie told Mic. "When you apply strip lashes, it is inevitable to not get any glue on your actual lashes. When you remove the lash strip, your natural lashes will stick to the adhesive and rip out with the false lashes when you remove them."

The best thing to do? "Be more careful and use as little glue as possible, as well as applying the strip as far away from the lash line while still keeping it looking natural," she said.

A new neon color every day can wreak havoc on your hair.

Crazy hair colors may have been one of the biggest trends last year and don't seem to be disappearing in 2016.  But all those intense color dyes — and changing them all the time — can be damaging to your hair.

As Aura Friedman, hair color expert and hairstylist at Sally Hershberger Salon in New York City, previously told Mic, you have to take the quality of your hair into consideration before going colorful. If hair is too damaged, it won't hold the color and endure the treatments.

Plus, getting bright color on dark hair may require bleach first, which is never great for hair.

"If you over process your hair with bleach, you can totally have hair damage and ruin the curl," Sarah Fenoglio from Seagull Salon in NYC told BuzzFeed. "That damage doesn't go away until you chop it off and start over."

Beauty Blender-type sponges may be the most popular tool du jour, but like any sponge, they can be a breeding ground for bacteria. And yes, that means you'd literally be rubbing bacteria along with foundation onto your face.

Carl Thornfeldt, a dermatologist based in Idaho, told Mic he advises against using sponges as "cosmetics excessively accumulating in the sponge can crystallize and abrade the skin."

That's where problems can really start. "The biggest risk of sponges relates to them functioning as a fomite, the medical term for a device that transmits microbes, irritants or allergens," Thornfeldt said, adding:

The most damaging microbes include bacteria, especially Propionibacterium acnes, Streptococcus and Staphylococcus species. ... In addition, yeasts including Pityrosporum orbiculare and Candida species can also accumulate to a high enough concentration to upset the microbiome (i.e. a normal, healthy skin environment) and produce infections and induce an acne flare.

Additionally, he said, "many cosmetic ingredients are irritants themselves and induce a contact irritant reaction when the concentration gets high enough in the sponge."

Fun stuff. If you're skeptical about the latest #InstaTrend taking over your feed, you're not totally off-base. Some trends just take some more effort, while others have a real expiration date.