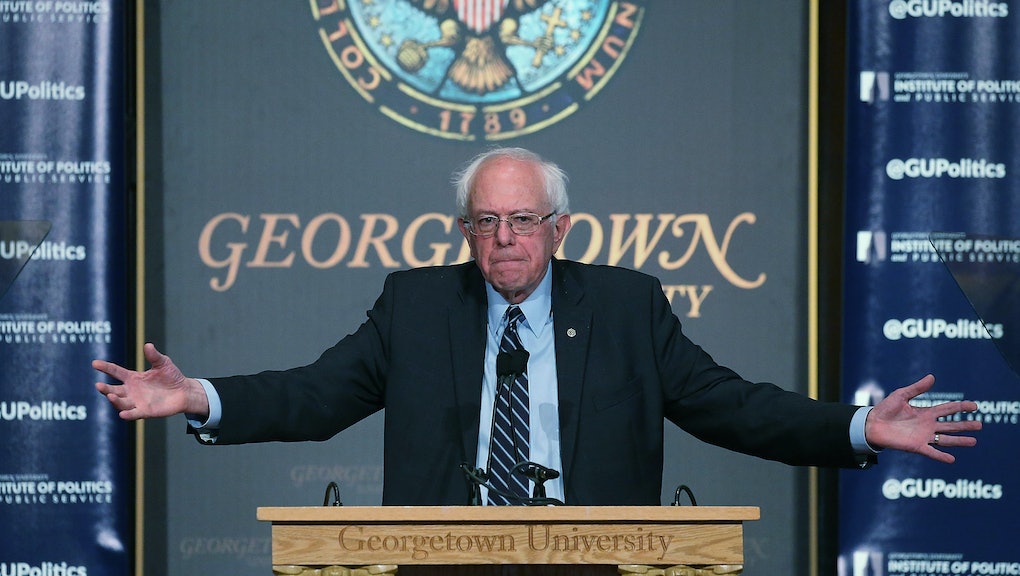 Bernie Sanders Socialist: How the ‘Democratic Socialist’ Stands on the Major Issues

While Vermont Sen. Bernie Sanders is performing well against Democratic frontrunner Hillary Clinton in New Hampshire and Iowa polls, it is possible that the primary concern for the Democratic Party is Sanders' electability. Put simply, the party is concerned that the American public would not be comfortable with a self-described "democratic socialist" in office, which could result in another Republican president. But what, exactly, are Sanders' socialist views?

In the prepared remarks for his Nov. 19 speech at Georgetown University, provided on his campaign website, Sanders described democratic socialism as a means to fix the economy and the stark difference in income between the 1% and the middle class through higher tax rates for the rich, while also comparing his present-day ideals to those of former President Franklin Delano Roosevelt during the Great Depression.

"Democratic socialism means, that in a democratic, civilized society the wealthiest people and the largest corporations must pay their fair share of taxes," Sanders said in the speech. "Yes. Innovation, entrepreneurship and business success should be rewarded. But greed for the sake of greed is not something that public policy should support."

Sanders defining himself as a democratic socialist in his speech, Vox's Ezra Klein noted, means he is still not a full-fledged member of the Democratic Party, which in part is what makes his campaign and its success wholly unique.

Watch the full speech at Georgetown below:

Discovery Communications' YouTube platform, TestTube News, also created a succinct, explanatory video on the distinct differences between the socialist principles Sanders supports, and how they stand apart from socialist ideals of other countries that might have a negative connotation — namely, China and Russia.

However, despite the potential uncertainty with the ideology, Sanders and Clinton still stand quite similar on many of the issues, like favoring background checks for gun control and supporting the DREAM Act (a full, comprehensive graph on the candidates' issue stances is available on Business Insider). Two main areas where the leading Democratic candidates' policies differ are with higher education and health care.

On education, Sanders is a firm proponent of the creation of tuition-free public colleges and universities — a concept that is employed in Scandinavian countries using similar socialist principles, such as Sweden and Norway. According to Sanders' campaign page, the plan would cost around $75 billion a year, paid for with a tax on Wall Street speculators.

"If the taxpayers of this country could bailout Wall Street in 2008, we can make public colleges and universities tuition free and debt free throughout the country," the Sanders campaign states on its page.

Meanwhile, on the issue of health care, Clinton supports President Barack Obama's health care law and would not repeal it if elected, and conversely, Sanders is a supporter of a single-payer health care system. Broadly, what Sanders proposes — with the help of economist Gerald Friedman from the University of Massachusetts at Amherst — is a program provided to every American nationally, rather than through employer-based health care, coining it "Medicare for all."

"As a patient, all you need to do is go to the doctor and show your insurance card," the Sanders campaign states on its page. "Bernie's plan means no more copays, no more deductibles and no more fighting with insurance companies when they fail to pay for charges."

However, some have raised issues with the cost of a single-payer health care program. According to Forbes' Avik Roy notes, the plan would create a 55% increase in federal spending, which could reach at least $28 trillion from 2017 to 2026. "By unintentionally pointing out the utter foolishness of single-payer, government-run health care in America, they've given us more impetus to think about how we could make the health care system better — and expand access to more people — by putting individuals back in charge of their own health care dollars," Roy wrote for Forbes.

Sanders has also received some backing for his health care plan, though. According to the American Prospect's Paul Waldman — in an article for the Washington Post — single-payer systems that are used in other countries are still noticeably cheaper than health care in America. "Whatever you might say about Sanders' advocacy for a single-payer system, you can't say it represents some kind of profligate, free-spending idea that would cost us all terrible amounts of money," Waldman wrote for the Post.

Ultimately, even with the socialist label among 2016 presidential candidates, Sanders' poll numbers suggest that Americans are warming up to the idea of a president with socialist values.