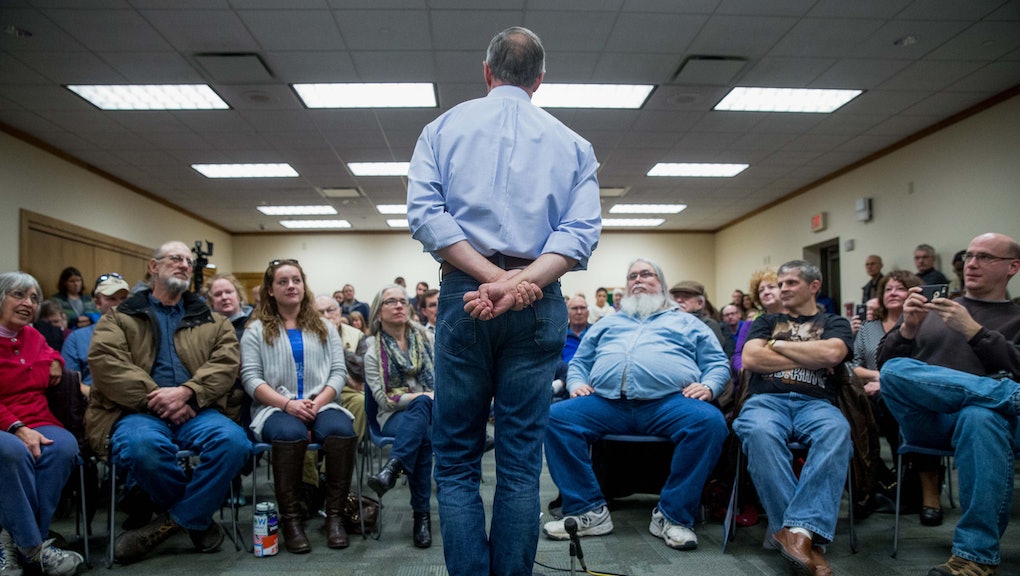 The Case for Ending Iowa's Stranglehold on the Presidential Nomination Process

On Feb. 1, Republicans and Democrats in the state of Iowa will head to the caucuses in the first contest of the 2016 presidential nomination process. But if either party had any sense left in them, they would end the tradition of the Iowa caucuses being first in the nation for good.

Born out of a rules change following the raucous 1968 Democratic National Convention, Iowa has served as the nation's first primary since 1972. Although contested, Iowa has held onto its "first in the nation" title aggressively ever since, forcing both parties to pander to an unrepresentative and homogeneous collective of heartland Americans accounting for less than 1% of the national population.

Iowa's demographics and economic priorities make the state a political loser for both parties, forcing Democrats to pander to an older, whiter and more male electorate than their party base and the country writ large. On the other side of the aisle, Republicans sprint to the right on social issues in an effort to win the votes of Midwestern Evangelicals while simultaneously promising to defend the federal agriculture subsidies that keep Iowa's economy sustainable but are nonstarters for fiscal conservatives.

Put simply, having the Hawkeye State weigh in first is bad for both parties. There are better ways of picking a nominee.

Democrats' big tent gets a lot smaller: Iowa is really white — 92.1% white, to be exact. The state has roughly two to four times fewer minorities than the national average, fewer women and more citizens over 65. At best, giving the Iowa electorate outsized influence misrepresents the articulated priorities of the American voter tremendously. At worst, it derails the conversation and priorities of presidential candidates in a way that favors the political views of the few at the expense of the many.

For a party built on the proverbial big tent, catering to the demands of a state population that is nearly as white as the Oscars hardly establishes the kind of credibility needed in a general election, much less the mandate needed to govern as a Democrat.

The white vote was the only racial group President Barack Obama lost in 2012, a loss that was particularly notable among white men. While working to win back this voting bloc isn't a waste of time for Democrats, they also shouldn't hold their breath that Sen. Bernie Sanders or Hillary Clinton can bring a substantial number of these likely Republican voters back into the Democratic fold.

Channeling the work of reaching out to white men through the lens of the Iowa voter distorts the interests of the rest of the Democratic party base and general electorate. Issues like criminal justice reform or gun control legislation fall further down the priority list for Iowan voters, but Democrats continue to spend millions of dollars and thousands of hours campaigning for their caucus support while neglecting the political priorities of other groups and political stakeholders whose support is arguably more important for building a successful general election coalition.

The fact that Sanders is within striking distance of Clinton in Iowa — and could very possible win the state — underscores the disconnect between the Iowa Democratic electorate and the national party. Sanders, who suffers a massive deficit in minority support while outpacing Clinton with white voters, won't be truly tested until the South Carolina primary on Feb. 20 — a direct result of the party playing to an unrepresentative electorate driven by Iowa's "first in the nation" status.

Pulling Republicans to the right: The same demographic issues at play for Democrats are even more significant for Republicans. Playing to the Iowa demographic has predictable results — candidates lunge to the right in an effort to win over the state's overly white, old, male, religious population, effectively handicapping themselves with more moderate general election voters.

Whether it's Donald Trump rolling out Sarah Palin's bewildering endorsement or Ted Cruz painting himself in camouflage and going hunting with the cast of Duck Dynasty, the men and woman jockeying for the driver's seat of the Republican Party are falling all over one another trying to out-conservative their opponents. This matches a familiar trend of candidates lunging further to the right in the closing days before the Iowa caucus. In 2012, Mitt Romney famously advocated for "self-deportation" a week ahead of the Iowa caucus — a position the Obama campaign used to bludgeon Romney on the issue of immigration during the general election.

The results in Iowa often lead to the crowning of the party's conservative champion, but not the party's eventual nominee. Just ask Rick Santorum and Mike Huckabee, the respective winners of the 2012 and 2008 Iowa caucuses. Iowa has only selected the eventual Republican nominee in a contested election three times since becoming first in the nation in 1972. Socially conservative issues like abortion and same-sex marriage play well to Iowa voters but often alienate the independents critical to winning the general election.

Effectively, Republicans spend the bulk of their early campaigning time, money and effort unceremoniously tossing a rifle around in order to shoot off as many of their toes as possible before the general election gets underway. This is hardly an effective campaign strategy and certainly not the best way to ensure eventual electoral victory.

What's the alternative? The danger of catering to Iowans isn't a new revelation. Like clockwork, every four years this debate springs up like a political groundhog, dependably seeing its shadow and scuttling away for four more years of ethanol-fueled pandering.

Other states have tried to become the new "first" primary event of the season, most recently in 2011. But these efforts have long been unsuccessful. In 1999, Iowa formed a lobbying group to help stave off those attempts and ensure the political commitments and campaign dollars continue to flow into the Hawkeye State.

The solution, however, is not in replacing Iowa with another similarly unrepresentative state. No single state is a good substitute. Certainly, more diverse demographic and economic states could serve as better representatives of the American electorate, but just as Iowans overwhelmingly represent white, energy-focused, religiously conservative voters, so too do other states reflect alternative voting blocs and values.

Instead, both parties should come together and identify multi-state blocs to hold their primaries simultaneously, similar to the traditional "Super Tuesday" or the so-called SEC primary happening on March 1 in a bloc of Southern states. These blocs could rotate with each election cycle, ensuring that no single group or set of values dominates the early stages of the presidential selection process.

Many versions of this process have been proposed, from the Delaware Plan, which would split the country into four regional blocs with small states voting first and big states voting last, to a system called the rotating regional primary, which would break the country into similarly sized regions and rotate their voting order with each election cycle. The latter has been officially endorsed by the National Association of Secretaries of States since 1999 but both plans have faced either opposition or a general lack of enthusiasm from the national parties.

Allowing Iowa to remain "first in the nation" only underscores the profound failure of either party to recognize and address the damaging effects of funneling candidates through the homogeneous ethanol choke point of America. It does damage to both Democrats and Republicans in the general election and stands as a tremendous disservice to American voters in the other 49 states. It's time for both parties to change that.