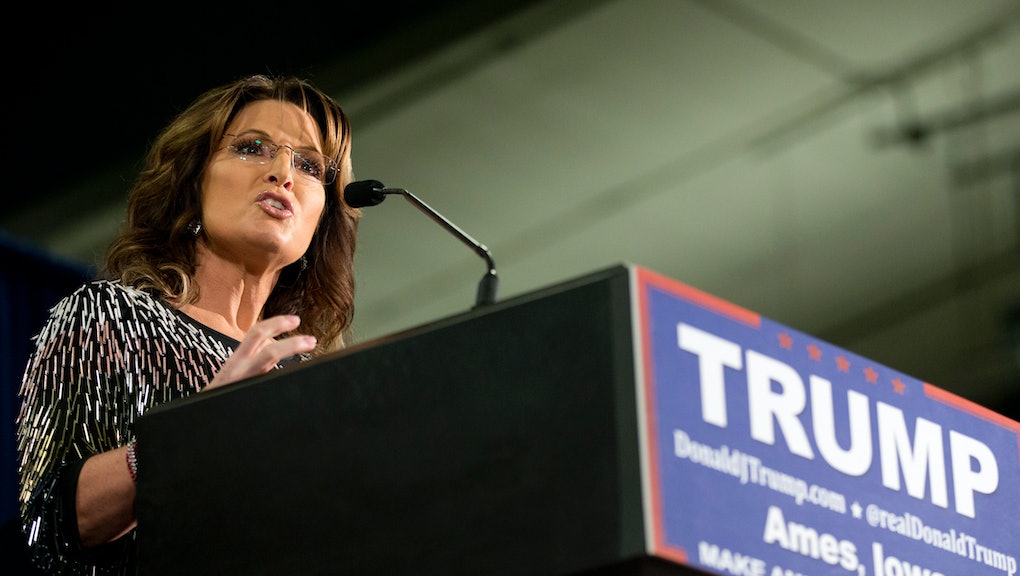 Former Alaska Gov. Sarah Palin publicly addressed her son Track Palin's alleged abuse of his girlfriend for the first time Wednesday, suggesting President Barack Obama bore some responsibility because he had failed to show "respect" for combat veterans like her son.

On Tuesday, the same day his mother endorsed Donald Trump's presidential bid, Track Palin was charged with three misdemeanors in connection to an alleged domestic violence incident in Wasilla, Alaska. The New York Times reported that an inebriated Palin, 26, allegedly punched his girlfriend in the head and "threatened to fire a rifle." The Army veteran of the Iraq War has pleaded not guilty.

Stumping for Trump on Wednesday in Tulsa, Oklahoma, the 2008 Republican vice presidential nominee implied Obama deserved at least some of the blame for the alleged incident.

"When I talk about a commander in chief who will never leave our men and our women behind, let me get a little bit personal on this," Palin said. "I'm talking about not leaving our wounded warriors behind also." Her son, she later said, experienced post-traumatic stress disorder, a common condition among military veterans.

Referring only elliptically to the charges facing her son, Palin said, "I guess it's kind of the elephant in the room, because my own family going through what we're going through today with my son, a combat vet, having served in a striker brigade, fighting for you all, America, in the war zone.

"But my son, like so many others, they come back a bit different. They come back hardened. They come back wondering if there is that respect for what it is that their fellow soldiers and airmen and every other member of the military so sacrificially have given to this country. And that starts from the top."

Sharpening her attack on Obama, Palin asserted that military personnel doubt his support for them.