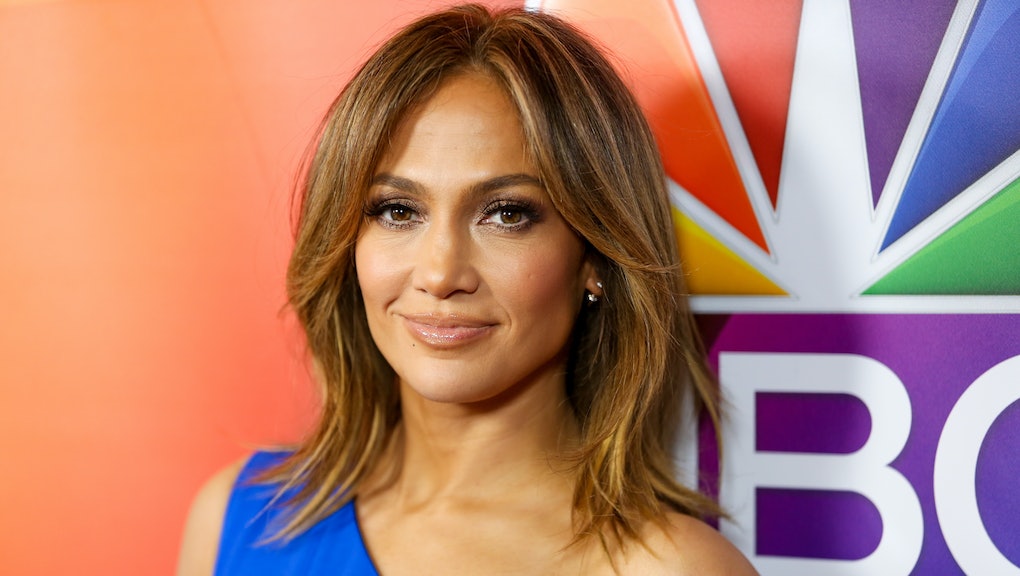 Is there any performer in Hollywood who works as hard as Jennifer Lopez? Sure, you've got your Ryan Seacrests and your Lady Gagas and your Bradley Coopers. Any of them could make a case for being show business' greatest hustler. Yet J. Lo towers above them all.

She's not just a musician. She's not just an actress. She's not just a producer, an American Idol judge or a Vegas performer. She's doing all these things without missing a beat — and she's woefully undercredited for it. Below, we've put together just a sampling of all the reasons J. Lo deserves her crown as the collective queen of film, TV and music.

Lopez became a musical megastar commuting into the music industry with On the 6 and later introducing fans to Jenny from the block. But after a pretty steady stream of music, she took a break after 2007. She disappeared a bit from pop culture, releasing zero movies until 2010 and only a couple of disappointing singles.

In February 2011, Lopez the performer came roaring back. Her comeback song "On the Floor," featuring close collaborator Pitbull, was a smash hit. It served both as an utter jam and a definitive statement that Lopez wasn't going anywhere. Her return record Love? wasn't her biggest, but it lent her a devoted enough following to guarantee she'd be releasing hits like "I'm Into You," "Dance Again" — and, years later, her accidental opus "I Luh Ya Papi" — for years to come.

Lopez took that experience with music and bolstered her comeback by becoming the new centerpiece judge on American Idol. With the exception of season 12, which featured the ego clusterfuck that was Mariah Carey and Nicki Minaj, Lopez has served as the anchor of a post-Simon Cowell Idol.

She's not been a perfect judge, often tempering criticism to the point of failing the young artists. However, her ear for talent was partially responsible for choosing season 11's stellar cast. She also provided warm mentorship to the budding stars, most obviously as she cheered on season 13's Jena Irene during her performance of "Can't Help Falling in Love." What young singer wouldn't want J. Lo's encouragement and hug?

Lopez isn't just a star in front of the camera. She also serves as executive producer on The Fosters, a progressive family drama on Freeform (formerly ABC Family). Lopez might seem an odd fit for a series about lesbian foster parents and their multicultural cadre of kids, but her motivation to get involved is actually quite personal.

"I had an aunt who was gay," she said in an interview in 2013. "I lived with her and I loved her. She just passed away from cancer. I thought of her often when I was thinking about taking on this project and the prejudices that she faced."

The Boy Next Door

On one hand, Lopez's 2015 film The Boy Next Door is delicious trash. There is no other hand. It is not a good movie, and Lopez was forced to read truly terrible lines about first-edition copies of The Iliad and "the best allergist in the valley." But it is a fucking blast.

The Boy Next Door is the exact kind of movie Lopez should be making. It's delightfully campy and aware of itself. It was actually one of the most fun films of last year — you don't include theatre star Kristin Chenoweth as Lopez's best friend if you're not going for fun — and made a ton of money in the process. It's an unequivocal win, and every J. Lo fan should have their fingers crossed for their queen to make The Boy Two Doors Down.

Every Thursday, Lopez appears on NBC's Shades of Blue as a good cop gone bad. It's an absolutely absurd show, comparable to The Boy Next Door in its camp value (if not its actual quality). Yet as a reminder of her Selena debut days, it works to prove that Lopez is actually a pretty great actress. In a weird show, she rises above.

This is the thing about Lopez: She's not the best music artist. She's not the best American Idol judge. She's not the best actress. But she's pretty to very good at all of these things, and she gives herself over wholly to them. She's totally game to try new things, from a Las Vegas residency to producing a TV show. For her tenacity, ambition and drive, she deserves respect — and, to answer the question posed in her comeback album's title, love.