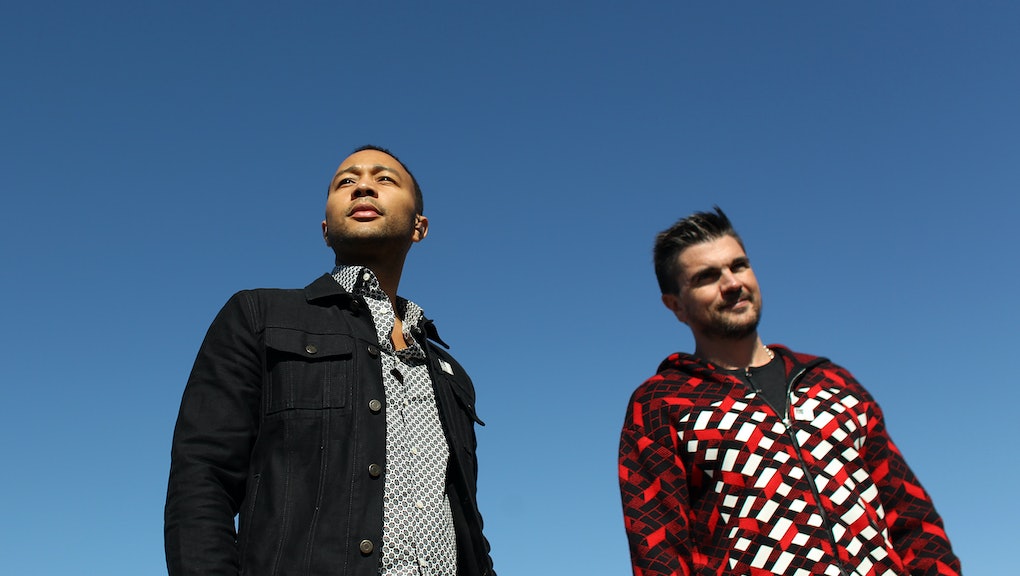 Juanes and John Legend are taking a stand on immigration policy — by staging a concert at Arizona's Eloy Immigration Detention Center. Or, more exactly, outside the detention center: The Colombian musician and Legend weren't allowed to perform on its grounds, which hold some 1,500 migrants. According to the Associated Press, Juanes and Legend made a flatbed truck into a makeshift stage, and played for an audience numbering around 100 outside Eloy's gates Wednesday. The crowd was comprised of activists and inmates' family members; the inmates themselves were reportedly kept inside, but Juanes and Legend wanted them to be able to hear their music.

"The reason why we're here, one, is because we want to bear witness to what's happening so we could tell the world about it," Legend told the audience, according to the Associated Press. The two wanted to call attention to the human cost of national immigration policy.

They performed a duet of Bob Marley's Redemption Song, along with their own material. Before they put on the concert, Juanes and Legend toured the facility, which one of the event's organizers — Francisca Porchas — thought might help lift detainees' spirits.

"For them it's something very important that they know they're not forgotten," she said.

The people held at Eloy have it particularly rough. In May, a Mexican immigrant named José de Jesús Deniz-Sahagún died while being detained there, sparking a hunger strike among 200 of the center's inmates. His death was ultimately ruled a suicide, one in a series that led to the center being called the "deadliest immigration center in the nation." And that's not the only indication of deplorable conditions at the center, which is the second largest in the United States, according to Fusion. In May, one transgender inmate reported that she had been assaulted and raped by a man with whom she'd been confined during her detention at Eloy.