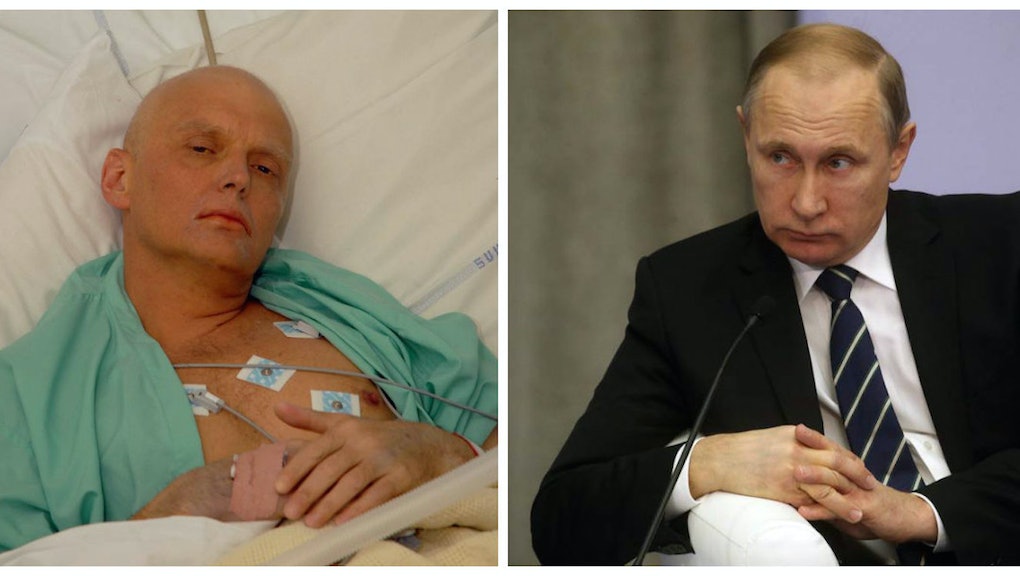 The United Kingdom just accused Russian President Vladimir Putin of "probably" approving the assassination of a former Russian spy on British soil. Yes, David After Dentist, this is real life.

Almost 10 years ago, the world was gripped by the assassination of Alexander Litvinenko, the former spy, who was served green tea laced with a radioactive substance in a fancy London hotel. Litvinenko died a few weeks later.

The cause of death? The extremely lethal and hard to detect polonium-210.

Suspicions, accusations and questions swarmed around Litvinenko's death at the time — medical professionals, none the wiser, first blamed the flu for his illness. But, on Thursday, a British public inquiry on the affair was published, apparently confirming what some already feared: Putin was most likely behind it.

Litvinenko was a KGB agent in the days of the Soviet Union, before becoming a Kremlin critic, vocal in his aspersions of Putin.

The report, led by a retired High Court judge and the Assistant Coroner who investigated Litvinenko's death, Sir Robert Owen, described the scandal as an "FSB [Federal Security Service of the Russian Federation and the successor to the KGB] operation to kill Mr. Litvinenko."

"I find that the FSB operation to kill Mr. Litvinenko was probably approved by [then-FBS chief] Mr. [Nikolai] Patrushev and also by President Putin," the report reads.

In the absence of irrefutable evidence, Owen's language is cautious, but the report still appears to leave little room for doubt regarding Putin's complicity.

After defecting from the Russian government, Litvinenko sought refuge in England, where he became a citizen and lived until his death.

Litvinenko was working on an investigation into the Russian mafia when he met with two other former Russian agents in a hotel bar. His companions — Andrei Lugovoi and Dmitry Kovtun — are suspected of slipping the polonium-210 into Litvinenko's tea.

In his probe, Owen was able to evaluate sensitive intelligence, which had previously not been allowed in related court proceedings, making his conclusions perhaps more robust than previous findings, the BBC reports. Still, the Russian Foreign Ministry described the report as "politicized," opaque and biased.

"We regret that the purely criminal case was politicized and overshadowed the general atmosphere of bilateral relations," the ministry said, according to the BBC.

British Ambassador Alexander Yakovenko was summoned to the Foreign Office after the publication of this report and a summary of his declarations were posted on the official embassy website. "This gross provocation of the British authorities cannot help hurting our bilateral relationship," it said.

Litvinenko's wife, Marina, called on the U.K.'s government to respond punitively in light of the report. By ordering the assassination of a British citizen on British soil, Putin would have committed a violation of Britain's sovereignty.

"I'm also calling for the imposing of targeted economic sanctions and travel bans against named individuals ... including Mr. Putin," Marina Litvinenko, told reporters on Thursday. "I received a letter last night from the Home Secretary promising action. It [signaled] that the prime minister [David Cameron] would do nothing in the face of the damaging findings of Sir Robert Owen."

The Cameron administration echoed Marina Litvinenko's prediction of inaction. The public inquiry "regrettably confirms what we and previous governments already believed to date," a spokeswoman for Cameron said on Thursday, according to the Guardian.

"We have to weigh carefully the need to take measures with the broader need to work with Russia on certain issues," the spokeswoman added. "When you look at the threat from Daesh [ISIS], it is an example of where you put ... national security first."

Similarly, a Kremlin spokesman said the case "is not among the topics that interest us," according to the New York Times.