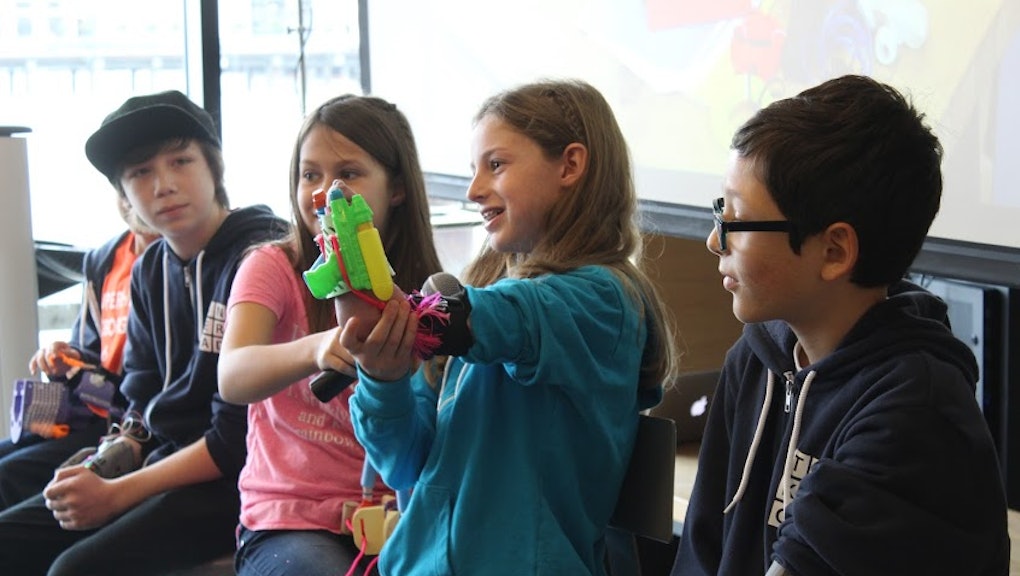 Kids grow up dreaming of becoming Superman, the Black Panther, Wonder Woman or the Green Lantern — mythical superheroes with outlandish outfits and out-of-this-world capabilities. For five days this January at San Francisco's Pier 9 workshop, six kids were able to do just that.

The group had gathered for the Superhero Cyborgs event, a program designed to give children and teens with upper limb reductions — about 1,500 such American babies born each year — a chance to imagine, design and create their very own 3-D printed prosthetics.

But these weren't just any old 3-D printed prosthetics. This was, after all, a superhero-themed workshop. Among other gizmos, these prosthetics came with built-in Nerf guns, glitter cannons and water guns, making them at once a kid's dream and a teacher's worst nightmare.

"It's a glitter bomb. It squirts glitter at people," 10-year-old Jordan Reeves told Mic of her creation. "Oh my gosh, they forced me to clean it up. It never leaves. My mom's already thrilled."

Reeves, who lives in Missouri and flew out to California for the workshop, is missing her elbow in her left arm. She told Mic that she has three prosthetic prototypes, one of which she refers to as the Sun. She's also a big fan of Rey, the new kickass female protagonist from Star Wars: The Force Awakens.

The workshop was the combined effort of Autodesk, a 3-D design, engineering and entertainment software company, and Kidmob, a "kid-integrated" design nonprofit that focuses on interactive learning. It was the second such event for Kidmob: Superhero Cyborgs 1.0 was co-hosted by Brown University's School of Engineering and the Helping Hands Foundation and took place in July 2014.

"It's about finding the superhero in all of us," Sarah O'Rourke, a senior product marketing manager at Autodesk, told Mic. "Regardless of what you're trying to accomplish, it's channeling that inner superhero and making it happen."

The workshop, which took place from Jan. 15 to Jan. 19, involved everything from improvisation activities to designing and sketching prototypes to jumping on tables and running up and down the pier. The first day, O'Rourke told Mic, "was all about breaking down the barriers for [the kids] to become 100% comfortable." Participants, who ranged in age from 10 to 15 years old, also took plaster casts of their limbs to better help them design their prototypes.

From then on out, it was all about imagining, designing and printing. Autodesk's Pier 9 workshop is equipped with a fleet of sophisticated printing materials and contraptions, including laser cutters, scanners and printers, although the team ran into some technical difficulties along the way.

"We had some printer problems," laughed Andreas Bastian, a 3-D printing research scientist at Autodesk. But besides that, he told Mic, the workshop was a success for both the kids and the adults in the room.

"[Adults] have a huge amount to unlearn before we start to leverage the technology," Bastian said. "Kids haven't yet learned that. They don't know the things we treat as impractical or impossible. They're just happy to try anything that occurs to them. They don't have those filters. They don't immediately discount ideas as being impartial or impossible."

"I've spent a lot of time teaching adults," he added. "Colleagues, including people with decades of [computer-aided design] experience. I was really impressed how unfazed the kids are by things that [adults can find difficult] ... it was not a traditional teaching or learning experience or environment."

Because the designs weren't fully fleshed out before the kids arrived, O'Rourke said there were multiple craft-supply runs to Michael's.

"The kids were so open and honest, and would tell you what they like and what they don't like," she told Mic. "It's very refreshing. There's no pretense at all. It's why I love working with kids — you always get that."

"[Kids] don't know the things we treat as impractical or impossible. They're just happy to try anything that occurs to them."

"It was pretty awesome," 13-year-old Kieran Blue Coffee told Mic. The California resident is missing his right hand as a result of Amniotic Band Syndrome, a condition that develops in the womb when a baby becomes tangled in strands of tissue from the amniotic sac.

When it came to his prototype, which was outfitted with LED lights, Kieran remained modest about the idea's germination.

"I kind of sketched it out," he told Mic. "I wasn't gonna use LED lights. Over time I was thinking about it. And then I thought it would look cool."

"Other people have their opinions," he added. "But I think my friends will think it's cool."

Kieran, who lives in Santa Cruz, said that he's worked with Bastian in the past to create 3-D printed prosthetics.

"It's been really fantastic to watch that process for the past year, to help kind of nurture this," Bastian told Mic of his experience working with Kieran. "It's such an exciting thing to have that opportunity this early to open up that possibility to make pretty much anything he can imagine."

Bastian likened the workshop to his own experiences early in life. "When I was 6 years old, a formative moment was when I got my first pocket knife," he told Mic. "Learning how to whittle sticks and wood. It opened up my horizons, and my ability to think about making things. Twenty years later, we're giving these kids access to such a powerful technology."

O'Rourke was quick to emphasize the empowerment that can often accompany a project like this. "They're solving the challenges that they face," she told Mic. "Sydney [a workshop participant] competes in pageants, and her mom was telling me how, when she first started, would hide her arm behind her. Over time, as she's gown strength, [she doesn't do that anymore.]"

But there was also another dynamic at play, and it was one that the adults in the room didn't necessarily expect: The kids became the teachers.

"The traditional way things are made for millennia shapes how we design things," Bastian told Mic. "So when we sit at a 3-D printer to design something, our ability to design something new is actually pretty constrained. We have a lot to unlearn." Kids, he said, are far less aware of these constraints because they don't have the breadth of knowledge that adults do.

"If I ask you to imagine a hole in a wood, what shape is that? Circular, because that's what shape a drill is. Our ability to imagine that is heavily shaped by my knowledge of existing manufacturing processes," he explained. What 3-D printing needs, he said, is to break beyond the mold — and kids are uniquely equipped to do that.

The question, however, is how to best connect kids and 3-D printers. The folks at Autodesk have been mulling the quandary for some time.

"We're really trying to elevate that so it becomes a lot more accessible," O'Rourke told Mic. "Does this [workshop] become a summer camp option?" One possibility, she said, was bringing the technology to the classroom.

"In classrooms throughout the U.S., there's such this emergence of science, creativity and social and emotional learning," she said. "A project like this, creating it into a curriculum for teachers to use — we're honing in on that."

And while the Superhero Cyborgs program is designed for kids with upper limb disabilities, O'Rourke believes the benefits are there for everyone.

"The workshop is more about body modification, whether you have a limb difference or not," she said. "It's about finding the superhero in all of us."