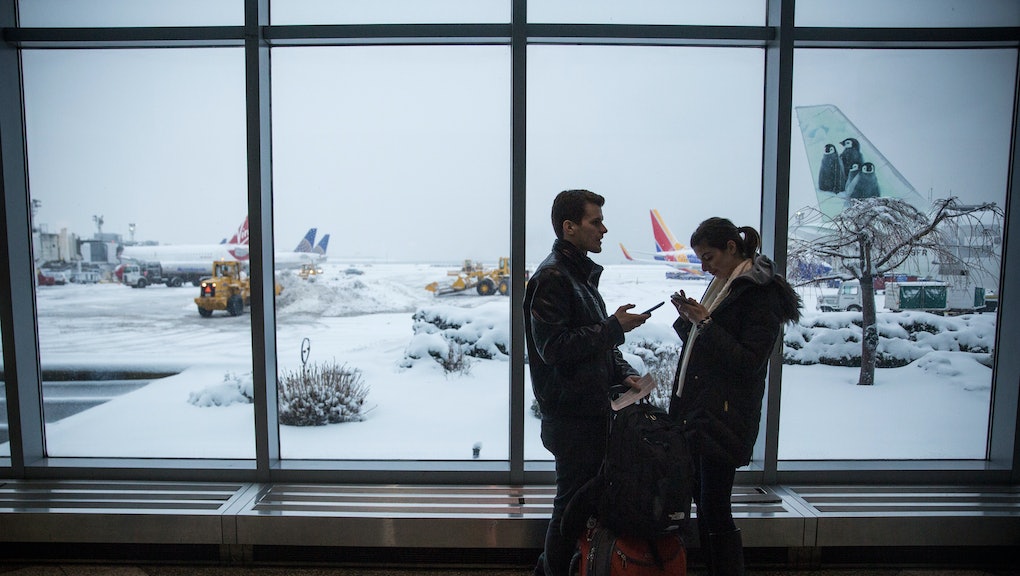 The novelty of an oddly warm December has come to an end, now that a winter storm system called Winter Storm Jonas is threatening the East Coast with heavy snow, ice, coastal flooding and strong winds this weekend, according to the Weather Channel. The wintery nightmare is expected to start on Thursday and go until Sunday and could cause airport delays at major airports in New York City and Washington, D.C.

The storm — which is expected to plow through major cities like New York and especially Washington, leaving behind up to 20 inches of snow in the capital and surrounding areas — is bad news for those who were planning to travel rather than Netflix and chill all weekend, as airlines and city officials are racing to gear up for the wrath of Jonas. Most airlines have issued advisories to warn people that flights to and from the Northeast are at risk of being delayed or canceled.

Check flights early: The first step for airline travelers should be to check with the airline itself to ensure that the flight is still scheduled. Most airlines are offering some kind of rescheduling without fees or refund for travelers this weekend, according to the Weather Channel.

American Airlines is also offering no fees for a one-time flight change, according to its website. Those traveling on Friday or Saturday can reschedule with JetBlue, as long as the new flight is before Jan. 29, and the old flight was booked on or before Wednesday, its website said.

Although airlines may divert, delay or cancel flights, many airports and their terminals and concourses will remain open during extreme weather, the Washington Post reported.

Here's the Weather Channel's full list of the airports included in the consolation offerings.