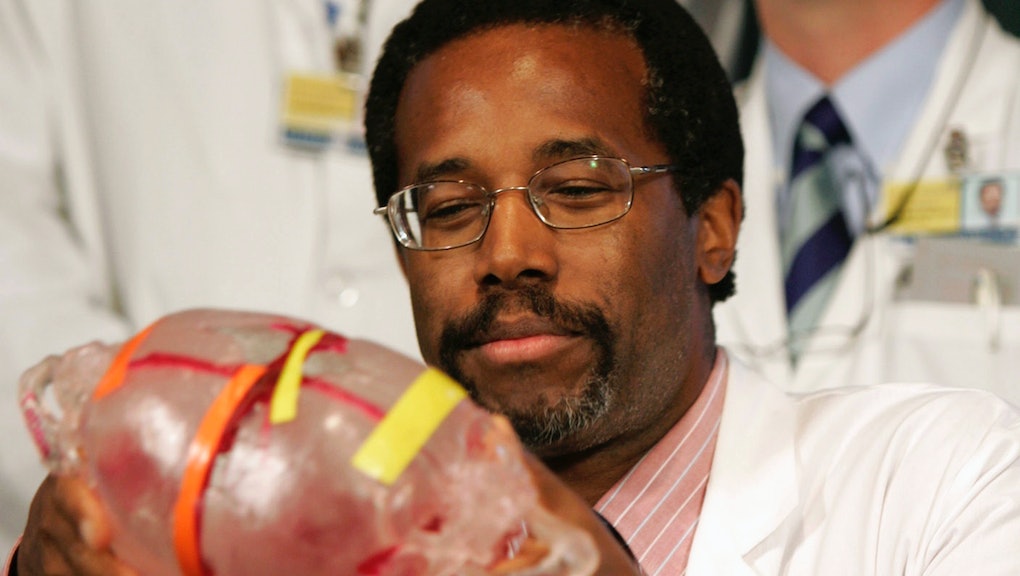 In a packed GOP field, Dr. Ben Carson has remained competitive in the national polls, despite a shorter political career than most of the Republican candidates. The retired neurosurgeon's rise to political prominence stemmed from a long and successful career in medicine, where his imprint on the field of surgery can still be seen today — even if it wasn't always considered ethical.

According to his campaign website, Carson attended ohns Hopkins Hospital for his residency training. It didn't take long for Carson to make an impact at the hospital and a new chapter in the medical field. At age 33, Carson became the youngest chief of pediatric neurosurgery in the country, according to the New York Times. Part of the reason for his early success was a willingness to take on risks in his field. In an interview with the Times, Carson said he felt it was always better to do something with a patient rather than nothing at all, especially if their situation was potentially fatal.

"It's always worth trying to do something, if there's any chance at all that doing something might end up helping," Carson said, according to the Times.

This is best exemplified in Carson's most famous surgery, from 1987, when he  successfully separated twins conjoined at the head, according to the New York Times. The risk with such a procedure included complications with severe bleeding and trauma, which could have proved fatal for the twins. However, after 22 hours — and a 70-member medical team — in the operating room, the surgery was successful, and the 7-month-old German twins had survived.

The story of the procedure — in addition to Carson's upbringing in Detroit — was made into a television movie, Gifted Hands: The Ben Carson Story, in 2009, with Cuba Gooding Jr. starring as Carson.

Carson performed similar surgeries in his medical career, including the controversial decision to separate adult twins in 2003, which ultimately failed, according to the Boston Globe. Overall, Carson attempted five similar surgeries — though he was a consultant for the fifth, rather than directly involved in the surgery.

However, according to the Globe, there have been severe complications for the patients who survived the surgeries.

For the twins from the 1987 surgery — Benjamin and Patrick Binder — both were not able to live normal lives. According to German media accounts acquired by the Globe, one of the twins remained in a "vegetative state," while the other was "developmentally delayed." It was such a stress on the parents that the mother eventually sent them to live in an institution, a decision that she said plagued her with guilt, and she divorced the twin's father, who she said couldn't handle the initial stress of taking care of the children.

"Why did I have them separated?" the twins' mother, Theresia Vosseler, said in a 1993 interview with a German magazine, according to the Globe. "I will always feel guilty. ... I don't believe in a good God anymore."

According to the Associated Press, Carson said he considered the actual surgery progress for the field, but that the outcome for the children was not successful. "In a technological Star Wars sort of way, the operation was a fantastic success," Carson said, according to the AP. "But as far as having normal children, I don't think it was all that successful."

Similarly, the Globe reported that a 2004 twin-separation — again conjoined at the head — led by Carson had one of the twins die shortly after the operation. The other twin, meanwhile, sustained neurological damage and attends a school for the blind. However, the twins' mother, Nelly Block, said she does not have any regrets for going through with the surgery.

"Dr. Carson said if we didn't separate them, their lives would be very short, only two years, maybe," Block said, according to the Globe.

At the very least, Carson said he thought it was a good learning experience for surgeons who could perform similar surgeries in the future. "A lot of younger guys are learning a lot, pushing on to the next border, which is how progress is made," Carson said in an interview at the time with Johns Hopkins Magazine. "We all act as stepping stones."

Regardless of the ethical implications, Carson's medical ambitions were recognized on a national level in 2008 by then-President George W. Bush, when the neurosurgeon received the Presidential Medal of Freedom — the highest civilian honor, according to a Johns Hopkins Children's Center press release. If anything else, while Carson's experience in the political spectrum is still growing, his impact on the medical field is unquestioned.

"The child of Detroit who once saw a grim future became a scholar, a healer and a leader," Bush said of Carson.