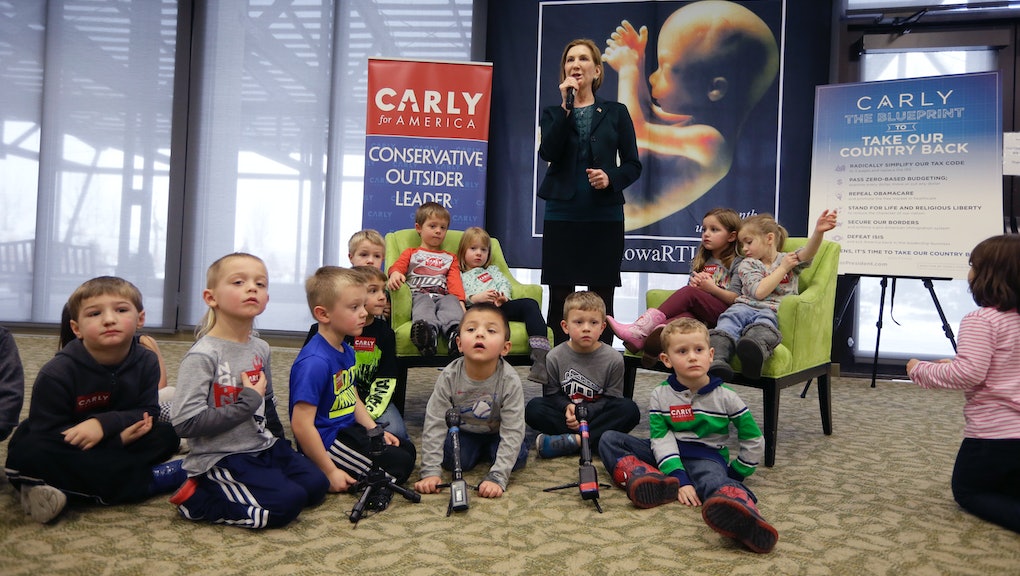 As her campaign continues to slide in the polls, Carly Fiorina may now be resorting to ever-more-desperate measures to stay viable.

During a stop at the Greater Des Moines botanical gardens, the 2016 Republican presidential candidate staged an anti-abortion rally which reportedly featured a troupe of preschoolers that had not consented to take part.

The children, students at the My Learning Safari preschool, were on a school trip to see some pretty flowers and plants. The interaction with Team Carly appears to have been spontaneous, with Fiorina's event coincidentally overlapping with the children's visit.

"I had no idea they were [at the rally]," Chris Beck, the father of one of the pre-schoolers, told Mic. "The campaign kind of latched on to the children and everyone kind of went along with it. It just snowballed once the interaction started happening."

Photos printed in the Guardian and the Des Moines Register show more than a dozen children seated by Fiorina as she speaks in front of banners bearing images of fetuses, slogans and anti-abortion bullet points.

"We're being told to sit down and be quiet about our God, about our guns and about the sanctity of life," said Fiorina, as the prop children sat in a semi-circle, the Des Moines Register reported. "The more we talk [about abortion], the more people learn, the more we find common ground."

Beck told Mic that if he could speak to Fiorina he would have urged her to "use better judgement," saying of the spectacle that "it's common sense not to do that."

In a Medium post provided to Mic by the campaign, Deputy Campaign Manager, Sarah Isgur Flores, shot back at the characterization, writing that "In Des Moines yesterday, a group of preschoolers along with their parents and teachers followed Carly right into the event she was speaking at for Iowa Right to Life."

The campaign provided an alternate headline: "Preschoolers loved watching koi pond with Carly and follow her into speech!"

For the former Hewlett-Packard chief — who has never held elective office — the incident was only the latest in a series of awkward moments from her campaign. Despite rising to prominence after a strong showing in the first Republican undercard debate, Fiorina took criticism for mischaracterizing a video of what was likely a premature birth, as an abortion at a Planned Parenthood center. Fiorina said of the video that you could "watch a fully formed fetus on the table, its heart beating, its legs kicking while someone says, 'We have to keep it alive to harvest its brain.'"

In a campaign dominated by the theater of Donald Trump, Fiorina made her own mark when she released a campaign video in which she's shown eating dog food.

The Fiorina campaign did not return emails from Mic for comment or clarification. My Learning Safari was also unavailable for comment.