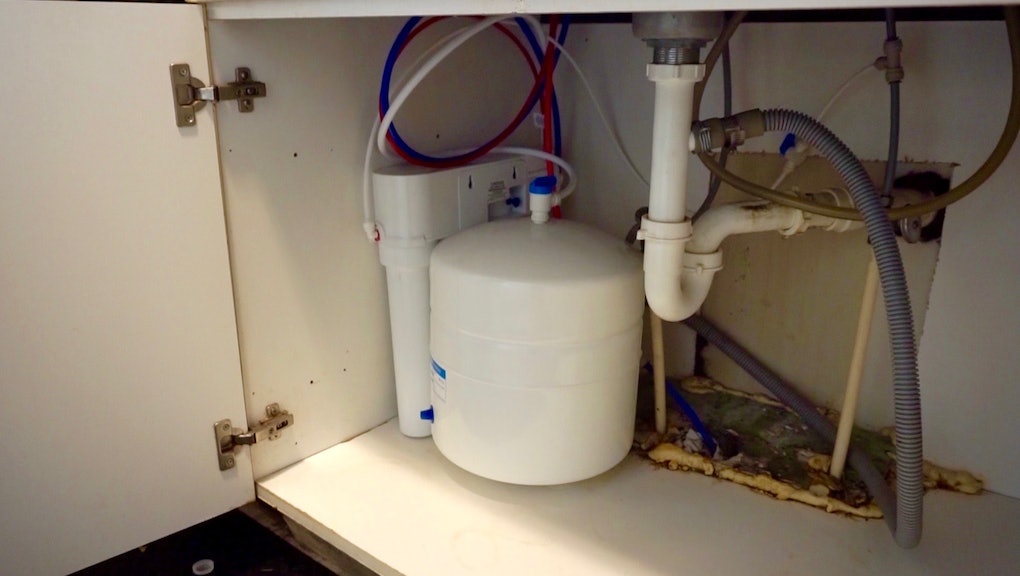 FLINT, Mich. — If you want to see firsthand how Flint's water crisis has affected its people, you need to understand the lengths residents have gone to keep themselves from getting poisoned.

For Shirley Love, the lead in Flint's water affected her eyes first. The longtime Flint resident and her husband, Joe, both 60, have been filtering their drinking water for years. But it wasn't until 2014, when the city started announcing boil-water advisories, that health problems started to crop up.

"I started having trouble with this right eye," Shirley Love told Mic during an interview at the Loves' home on Tuesday. "When I get something in my eye, I splash it with a face bowl of water. I do that all the time. But now my eye itches, it hurts, it's blurry. My doctors told me I'm aging. It's not aging. Something else is going on."

So Joe Love took matters into his own hands and built a DIY filtering system, using reverse osmosis to remove waste from the city's water.

Though expensive, the Loves' filtration system was worth every penny, they told Mic. The human cost of Flint's water crisis has been much greater.

The city is in the midst of a major health scare. When Flint was cut off from using Detroit's water in 2014, it switched to the Flint River as a source — a river locals say has been screwed up as long as they can remember. "It was full of sludge coming from the sewers," Joe Love told Mic. "There were cars, bikes; sometimes you'd run across a dead dog or a cat down there. We didn't think nothing of it. But we'd never fish there. When I heard they switched to the Flint River, I thought, 'Now why'd they do that?'"

They were right. The river's water corroded the city's pipes, sending lead into people's homes. Ten have died from Legionnaires' disease as a result.

Joe and Shirley shelled out an estimated $500 or $600 for an Absopure reverse-osmosis drinking-water mechanism. It uses a pressurized system to push water through a thin, barely permeable membrane, which catches contaminants like lead and bacteria, separates them from the water and flushes them down what you could call an exhaust line. Aquafina uses the same technology to purify its water.

"Those small filters [you get at the fire station] don't get all the waste out," Joe Love told Mic. "It takes some of it out, but some is still in there, so you're gonna get some of the bacteria in your body."

After the boil-water advisories, the Loves took the next logical (but expensive) step. In September, they put activated-charcoal filter systems on their shower heads. "If I wanna take a bath, I run the water in the tub," Joe told Mic. "I won't use it straight out of the faucet."

Activated charcoal works by attracting chemicals like bacteria and chlorine, pulling them out of the water and trapping them in filtering bulbs.

For around $69 each, the Loves say, the charcoal-based filters are good enough for their skin. But they would still never drink the water. "It doesn't do the whole job like the one under the sink," Joe told Mic.

"We've known for quite some time the water just wasn't right even before they started saying we had to go under [boil-water advisory]," Shirley told Mic. The advisories said the Loves lived in one of the worst-possible areas for lead content.

After decades in Flint, Shirley and Joe plan to leave town as soon as they get their tax returns back. They love their landlords, whose names are also Shirley and Joe, but the Loves feel they're running out of options. "We just have to find another place to stay," Joe Love told Mic.

All things considered, Joe and Shirley Love are lucky. With their children grown up and out of the house, they were able to save up enough while on work disability to afford what tallies up to at least $700 in filtration systems. But according to the Loves, and many other Flint residents who spoke to Mic, the majority of locals wouldn't be able to afford a system like theirs — and it's time for the city to step in and find another solution to keep its people from bathing in toxic chemicals.