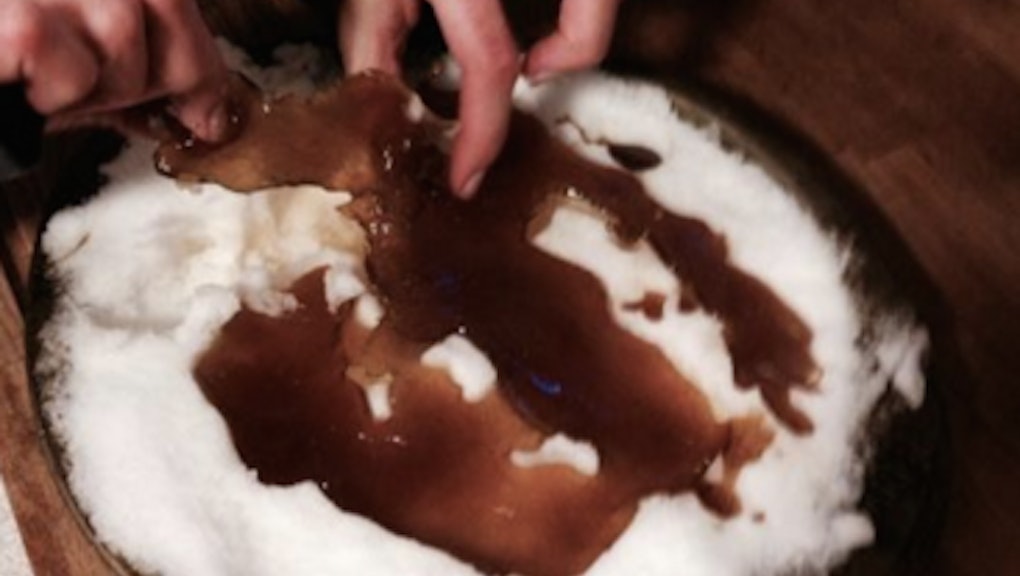 In a famous excerpt from the Little House on The Prairie book series, Laura and Mary were taught by Ma and Pa how to make delicious maple syrup taffy using fresh snow. Though news of snowflakes harboring microscopic pollutants from car exhaust is tainting the childhoods of snow-tasting Americans everywhere, the treat is still a popular delicatessen to make during winter storms like the one currently barreling toward the Northeast.

In fact, there are several winter treats to be made using snow as the main ingredient. But be warned, eating them might not be the healthiest idea if the snow comes from a city area or near roadways. For everyone who can manage to scrape together a few bowls of the precious, untouched gift from the heavens, check out these recipes for some chilly delights:

According to the 1979 Little House Cookbook, making maple snow candy is pretty simple: You will need a cup of molasses, a half cup of brown sugar and plenty of clean snow.

Mix the molasses and brown sugar in a nonstick saucepan and bring the two ingredients to a boil. Stir the mix every so often, until the combination reaches 245 degrees Fahrenheit (use a candy thermostat to measure the temperature).

Gently pour the mixture over a heaping serving of snow spread over wax paper. The snow and mixture will almost immediately solidify, making a delicious treat. Dry the candy with paper towels and enjoy!

The Canadian version of Little House on the Prairie's maple snow candy is just as delicious, and even easier to make than the previous recipe. All you will need is your favorite maple syrup and popsicle sticks, available at most grocery stores.

Lay out the popsicle sticks in a straight line in a slate of fresh snow. Drizzle the maple syrup in generous portions over each of the sticks.

Give the maple syrup sticks a few minutes to freeze with the sugary goodness and snowflakes before lifting them from the slate. In almost no time, you've created a delicious spread to enjoy in pure Canadian fashion: by pouring maple syrup on just about anything.

TreeHugger has the perfect recipe for vegans looking to mix the Earth's finest flakes with coconut goodness. Allow a can of coconut milk to chill in a mound of snow (or the freezer) for at least thirty minutes before opening it and shaving off the top — unless you're into that.

Afterward, combine the contents of the can with 8 cups of snow and 2 tablespoons of maple syrup in a large bowl. Voila!

This specific dish could also go great with a few ounces of rum, replicating the Puerto Rican coquitos pictured above.

What better excuse to drink alcohol that's been on the ground than in the midst of a catastrophic snow storm?

The best part of spiked snow cones is that they can be as simple or complex as your taste buds desire. Simply fill up a cup with snow and top it off with an ounce of whiskey, vodka or rum. Add a bit of flavor to make the drink go down smooth. Fresh orange, lemon or lime squeeze will compliment this beverage perfectly.