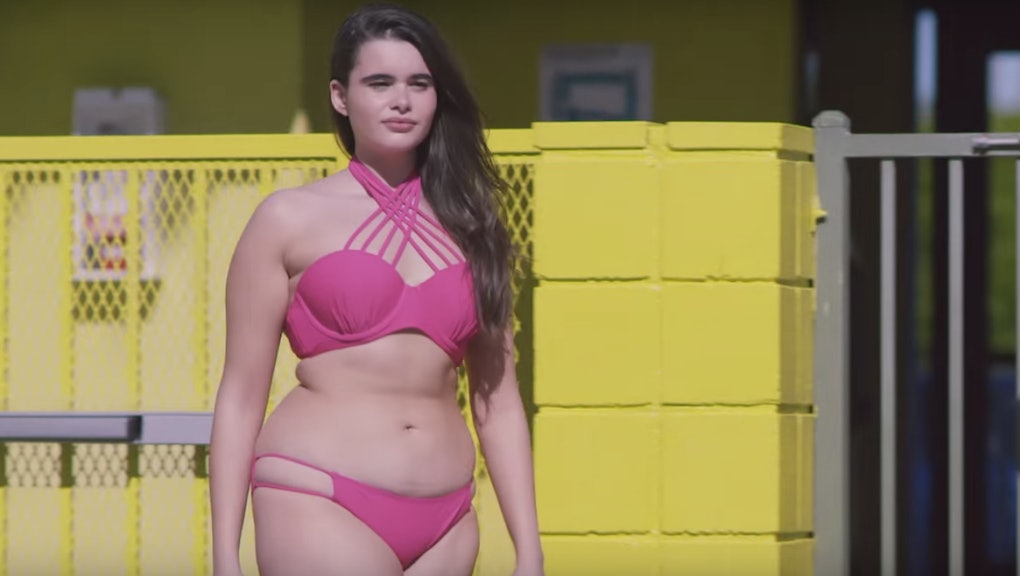 aerie, American Eagle's lingerie offshoot aimed at young women, has made a name for itself on the internet by using no photo retouching, even on ads with celebrities like Emma Roberts. It's also made a point to cast models with "real" (read: more realistic-looking and average-sized) bodies.

Now aerie's at the forefront with another exciting casting: choosing "curve" model Barbie Ferreira for its latest campaign.

Ferreira is a 19-year-old model with a legion of young fans (about 219,000 Instagram followers and 64,000 Twitter followers as of today) and an outspoken stance on body image. She doesn't fit the fashion industry's strict size 0 or 2 norm, but she's also not quite plus-size. Instead, she's a "curve model," a phrase she and her peers and their many followers use, that emphasizes shape rather than numerical size.

Now Ferreira, the "queen of in-between," is an aerie model. In a video teasing the campaign she shared with her followers on Thursday, the teen is seen walking around the pool in a hot pink bikini.

In the video's narration, she gets real about the importance of not retouching images.

"Not being retouched in the images is something that is very important to me," she says. "People knowing that that's what I look like without anyone's perception of what my body needs to look like."

"What makes me aerie real is that I am unapologetically myself, no matter what anyone's opinion of me is," she adds.

On American Eagle's website, Ferreira poses alongside the four other models also participating in the campaign, and she's the only curve model of the bunch, under a banner that reads "The Real You Is Sexy."

When Ferreira, who is signed to Wilhelmina International in its "Curve" category, posted a snippet of the campaign on her Instagram, support immediately started rolling in from her rabid fans.

In June, Ferreira started getting attention for being one of the youngest "curve" models out there, at just 18 — and for helping slowly put the term on the map. In a November video interview with i-D, she advocated for a designation that includes a greater variety of women's bodies (and possibly just sounds less uncool), saying, "The term 'plus size' is so inaccurate. I'm not plus size, I have never bought an article of clothing that was plus size."

For girls who have curves and may not be a size 2, it's a sentiment that's resonating, and it's an ideal fit for aerie's ongoing #aerieREAL campaign. Sales jumped when the brand initially launched the no-Photoshop aspect of the campaign; featuring a "curve" model like Ferreira, given her social media influence, only helps the brand further its positive, happy-go-lucky message of inclusion.

[12:06]people knowing that that's what i look like without anyone's perception of what my body needs to look like"