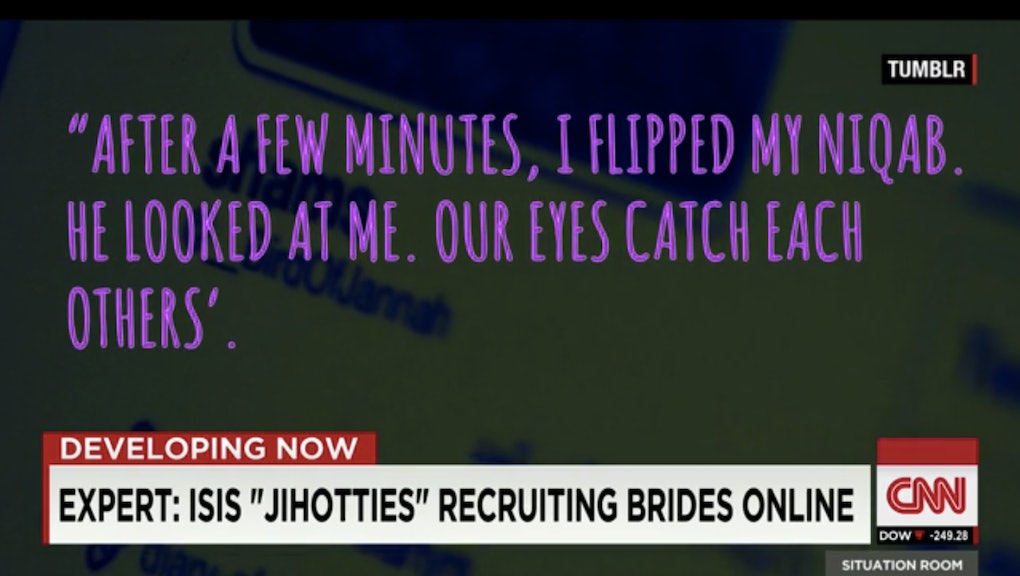 Are You a 'Jihottie'? ISIS Wants You!

Jihotties. That's the popular term for ISIS fighters showing off their masculinity on social media in search of prospective brides.

A CNN video report on the practice, published Wednesday, singles out one Twitter user, claiming to be a woman who fell in love with an ISIS fighter. The since deactivated account, entitled "shams" with the handle "@_BirdOfJannah," was "targeting mostly women in a match.com style," CNN describes.

Shams reportedly wrote about the experience on Twitter in a manner which resembles a page-turning romance novel: "After a few minutes, I flipped my niqab. He looked at me. Our eyes catch each others. I had palpitations that is [sic] faster than the speed of light."

The prospective brides are lured to Iraq and Syria with the promise of free accommodation and cars, along with quality health care coverage.

ISIS has developed a reputation for itself as social media savvy and the alluring online campaigns have been somewhat successful, given their ability to recruit women from the West. They feature multifarious appealing images of happy ISIS-brides with their one true ISIS-fighter love.

The Institute for Strategic Dialogue's report, "'Til Martyrdom Do Us Part: Gender and the ISIS Phenomenon," describes the recruitment of women as singular.

"Feeling isolated socially and/or culturally, including questioning one's identity and uncertainty of belonging within a Western culture" have motivated women to join ISIS, according to the report. As does the "feeling that the international Muslim community as a whole is being violently persecuted."