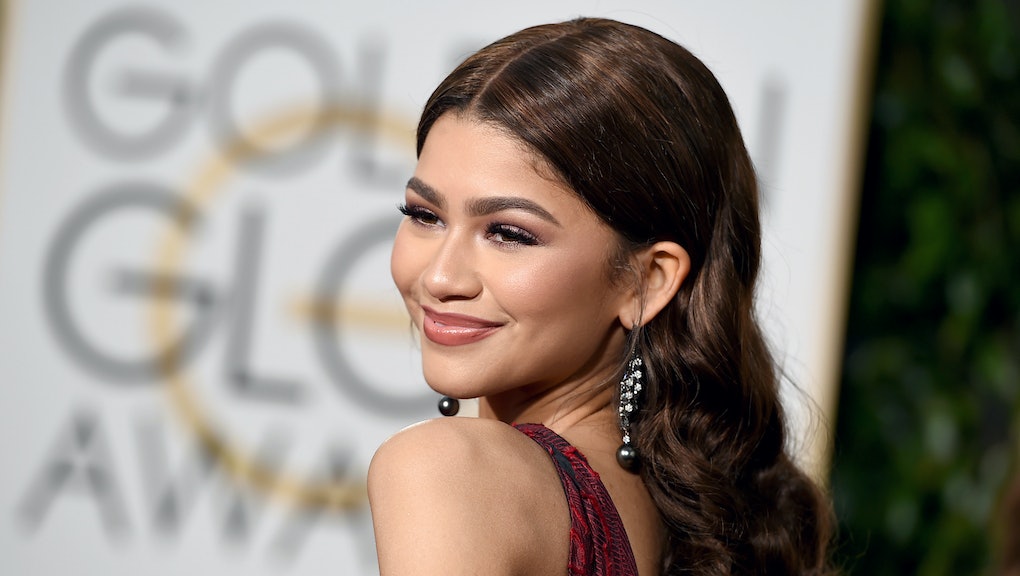 Here's Why Zendaya Is the Perfect New Face of CoverGirl

As Hollywood is grappling with how to deal with it's whitewashed limelight, a rising actress has been announced as the latest CoverGirl. Perhaps surprisingly, the starlet is not Jennifer Lawrence, nor another blonde, white A-list celebrity. It's 19-year-old Zendaya, and this is easily her biggest beauty campaign to date.

"Meet your newest, easy... breezy... beautiful Covergirl," the beauty icon captioned an Instagram video on Thursday, which shows the actress in two different looks while practicing the classic CoverGirl catchphrase. The actress has been teasing fans across social media throughout the week, writing on Wednesday, "something new... something beautiful" would be announced imminently.

At such a young age, as the campaign's latest spokeswoman Zendaya is joining the ranks of Brandy Norwood, Krista White, Queen Latifah, Sofia Vergara and Taylor Swift. However, for someone with so much influence in the fashion and beauty industries, the announcement has been a long time coming.

Zendaya has already tackled a number of pressing issues both industries are facing, while teaching important lessons about self-worth and beauty along the way. When a magazine notoriously edited images of the model and actress to make her skin appear brighter and her hips to seem smaller, Zendaya uploaded the photos to social media side by side to show the alterations.

"Had a new shoot come out today and was shocked when I found my 19-year-old hips and torso quite manipulated," Zendaya captioned the image the day it was released, then immediately removed it and replaced with the original photo by Modeliste Magazine. "These are the things that make women self-conscious, that create the unrealistic ideals of beauty that we have. Anyone who knows who I am knows I stand for honest and pure self-love."

Speaking of #OscarsSoWhite, the internet's current dialogue surrounding the Oscars' failure to nominate a single actor or actress of color for the 2016 awards show, Zendaya is no stranger to Hollywood's ignorance. After donning a lustrous set of dreadlocks at the 2015 Oscars, the actress was attacked by Fashion Police host Giuliana Rancic with some rather scathing commentary on her style, "I feel that she smells like patchouli oil... or weed," Rancic said about the then-18-year-old.

However, the actress used the mockery to make a significant point about stereotypes, calling Rancic's remarks "ignorant slurs."

"To say that an 18-year-old young woman with locs must smell of patchouli oil or 'weed' is not only a large stereotype but outrageously offensive," Zendaya wrote on Instagram. "There is already a harsh criticism of African-American hair in society without the help of ignorant people who choose to judge others based on the curl of their hair. My wearing my hair in locs on an Oscar red carpet was to showcase them in a positive light, to remind people of color that our hair is good enough."

At a time when the infrastructure of Hollywood appears fragile, with a number of celebrities boycotting the coveted 2016 Oscars awards show, the entertainment industry needs more than just a pretty face; it needs a voice. Zendaya has proven her ability to eloquently highlight the flaws in various industries, while remaining the level-headed and charming teenager her fans have grown to love.

For Zendaya, CoverGirl is just the beginning.