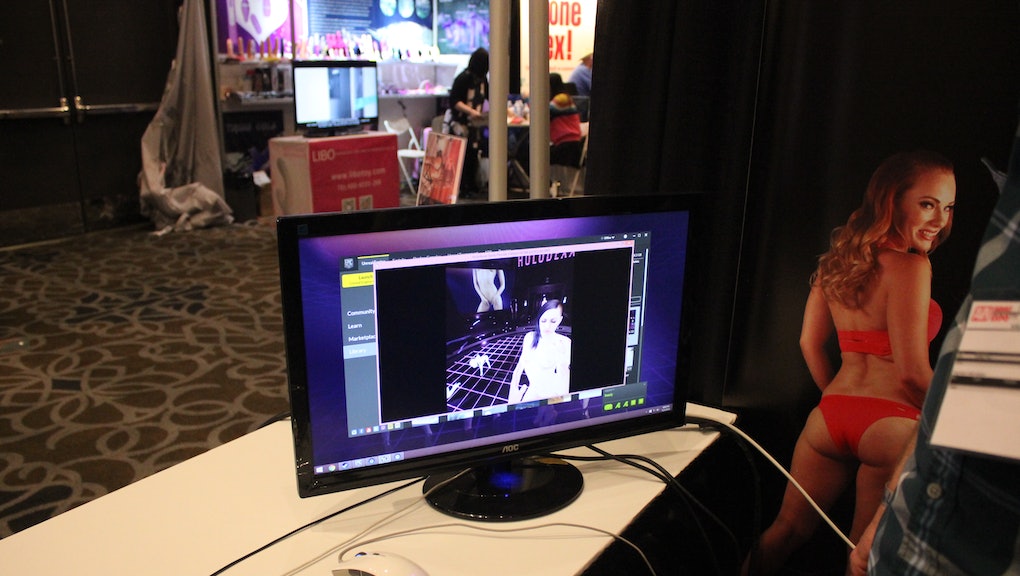 Yet despite the kaleidoscope of flesh, mesh, leather and lace on which attendees can feast their eyes, the most compelling sight at the convention was holograms of nude women, viewable via a bulky virtual reality headset. Instead of gawking at the countless adult performers milling around them, fans were gathered around, gawking at nude holograms.

As the 3-D scanning technology behind VR improves, however, developers are also finding ways to let users do what they want to performers, making it feel as if they're not just viewers, but actually directing — and participating in — their own scenes. The technology could have major implications for the way we connect with each other from afar, allowing people to live out their sexual fantasies through 3-D avatars.

The simulation shows users a 360-degree view of a "room" that looks sort of like the set of American Idol circa 2004, in which a naked model stands in different poses on what appears to be a black-and-fuchsia gridded stage. The avatars flirt with their eyes and alternately pout or lick their lips, actions Young and his team are able to simulate after each performer models 40 to 50 different facial expressions at Holodexxx's studio. The expressions are captured from all different angles, allowing the developers to create an uncanny digital likeness that responds to users' directions and movements.

Users can then select from a series of positions on the left-hand side of the screen (just walk over and point with one of the controllers) and make the avatar, say, get on all fours or lay spread-eagle on the ground. Of course, what users can't do is make performers participate in actions that haven't been pre-recorded. So, if a given star doesn't agree to get her or his face slapped, for instance, Holodexxx won't record the facial expressions necessary to create that animation. According to Young, it's a built-in method to avoid exploitation.

"We're casting stars and models based on their willingness and what they're willing to do on film," Young said. "It's a pretty clear indicator of whether or not they'll be OK doing this in a virtual world, in a game. We haven't run into any issues. If there is an issue, we'll absolutely deal with it on an individual basis."

Holodexxx also plans to make teledildonics, or sex toys that can be controlled from afar, part of the equation sooner rather than later. That would let users control not only what they do to an avatar, but also enact it with a corresponding toy for a real-life partner. For now, though, Young said they're trying to focus on making the porn-star version as accurate as possible, then they'll figure out how to make the product useful for more than one person at a time.

"What we're developing is something that you can control. You can be a part of it."

While Holodexxx might be one of the only companies developing interactive sex avatars at the moment, other VR companies are also working on ways to make their products compatible with teledildonic technology, not to mention with couples' needs. George He, a spokesman for HoloGirls VR, told Mic his company is looking to give couples new ways to act out their fantasies together.

"It's still the early days," Young said. "There are still bugs to work out. The technology is still catching up." But, he added, "we're offering a unique take on virtual reality."