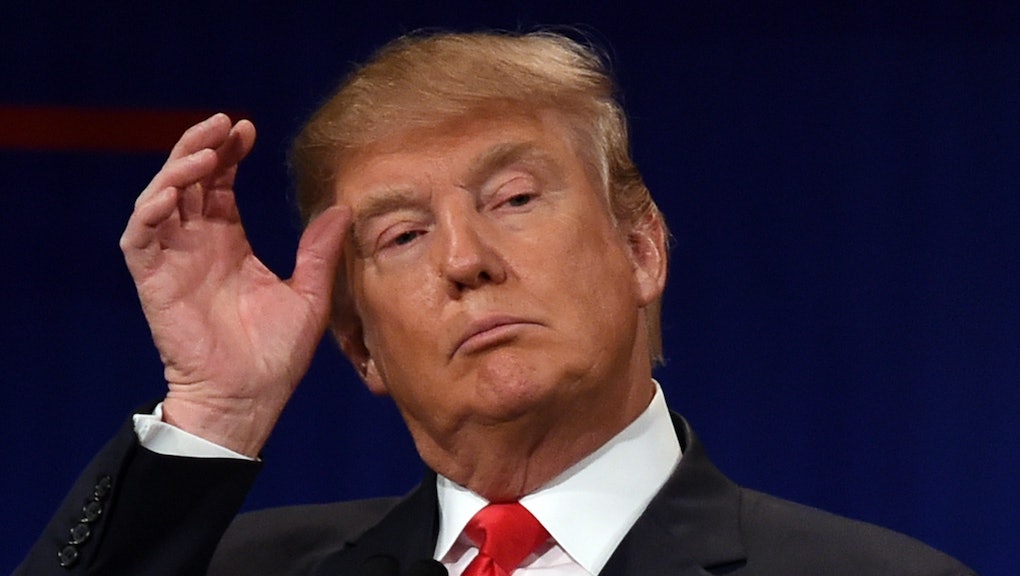 The National Review, famed publication of the conservative elite, doesn't like GOP presidential candidate Donald Trump... And they're not shy about it.

National Review's latest issue, featuring a gold filagreed cover perhaps harking back to Trump's preferred home decor, contains a series of essays from top conservative thinkers and household names explaining why they are "against Trump."

"Rising out of the ashes of that [2008] electoral defeat came the Tea Party," radio host Glenn Beck wrote. "The media struggled to explain it away as racist, xenophobic and jingoistic. But the truth is, the Tea Party did not arise because Barack Obama defeated his opposition. It arose because there was no opposition."

"If Donald Trump wins the Republican nomination," he added, "there will once again be no opposition to an ever-expanding government."

"A lot of Americans think it would be better to have a businessman than a politician as president, and I sympathize with them," Boaz explains. referencing Trump's history as a billionaire real estate magnate. "Alas, the only businessmen crazy enough to run for president seem to be, well, crazy."

Trump did not take this in stride. He swiftly followed the National Review's denouncement with his own barbs:

He followed these remarks with a last-minute news conference, its sole purpose to address the magazine.

The Review pays a price. Just hours after the cover was released there was another displeased party: the Republican National Committee. The Review was originally scheduled to cohost the next GOP presidential debate with CNN on Feb. 25 in Houston, Texas, but the controversial cover caused the conservative party to rescind its invitation.

"Tonight, a top official with the RNC called me to say that National Review was being disinvited," Jack Fowler, the magazine's publisher, wrote in a post entitled "Houston, We Have a Problem." "The reason," he continued. "Our 'Against Trump' editorial and symposium. We expected this was coming. Small price to pay for speaking the truth about The Donald."

But will the cover actually help Trump's campaign? The GOP frontrunner has managed to consistently outdo others in the race by positioning himself as a staunchly populist candidate.

In an exploration of his candidacy's phenomenon, Politico Magazine described him as "the anti-establishment frontrunner" in October.

One Twitter user tweeted at the National Review early Friday morning, sending a cautionary message to this effect.

And Trump's Twitter supporters honed in on the Review's reputation for representing the Conservative elite. (Case in point: the oft-mocked patrician accent of its late founder William F. Buckley, Jr.) The magazine's denouncement, many argued, would do little to hurt their populist candidate, who has built his campaign around setting himself apart from the political fray.

So, just as Trump's candidacy continues to defy the laws of... everything, a denouncement from the heart of the American conservative establishment might just serve to help his cause rather than hurt it.