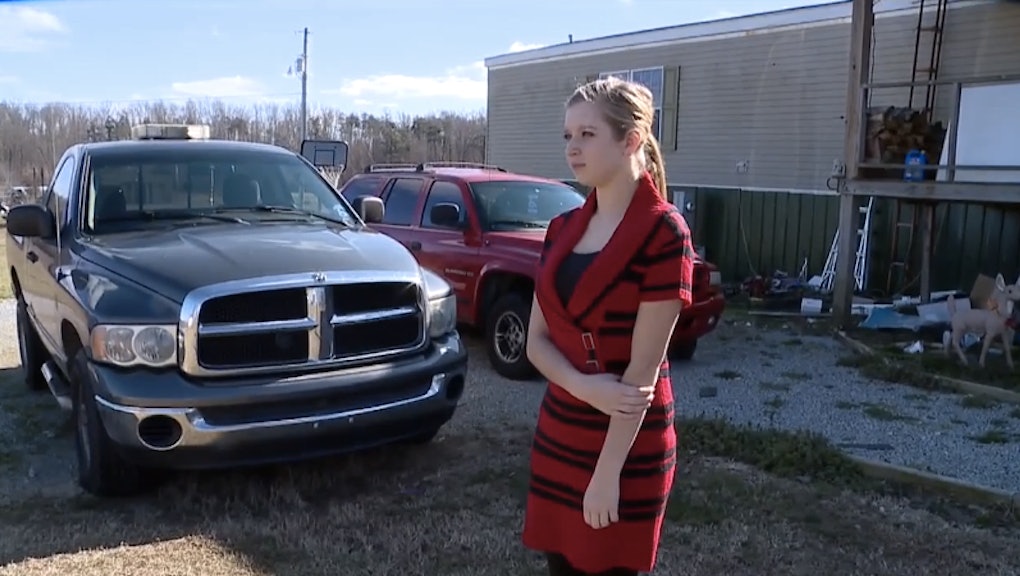 Like a growing number of teens across the country, Amanda Durbin, a 17-year-old senior at Edmonson County High School in Kentucky, decided to protest her school's sexist dress code. Instead of receiving a warning, detention or even suspension, as others have before her, the teen was forced to get on her knees before her principal.

The protest: After an influx of female students were recently punished for wearing leggings and dresses deemed too short, Durbin and a group of her peers decided to push back on what they saw as an unfair policy. The students led a "mature protest," Durbin told BuzzFeed. Last Friday, Durbin wore leggings and a dress that her parents described as one she could "wear to church," according to a local WBKO report. She was sent to her school's office during her third class, BuzzFeed reported Thursday.

What then transpired left the teen "embarrassed" and "humiliated." The school's principal, Tommy Hodges, asked Durbin to kneel before him so he could measure her skirt length. Durbin said she felt uncomfortable doing so and requested her parents' presence. Her request was granted, but the student missed valuable class time while waiting two hours for her parents to arrive.

"They didn't give me any other option," Durbin told BuzzFeed. "I had to sit there."

Once her parents arrived, the principal still forced Durbin to kneel and measured her skirt, which met the code's parameters. The principal was not satisfied, however, and then asked Durbin to walk across the room with her hands up and kneel once more for another measurement, at which point she was deemed out of dress code and sent home.

"I didn't really appreciate having to get down on my knees, especially while I was in a dress," the teen told BuzzFeed. "It did make me feel a little embarrassed, a little insecure of myself."

Durbin's mature protest ultimately resulted in a violation of her dignity — one rooted in an ironically sexual request given the attempt to curb her supposed indecency. Perhaps even more ironically, the purported attempt to maintain an optimal educational environment resulted in missed class time. All that was accomplished, it seems, was effectively sexualizing and objectifying a 17-year-old girl.

A history of sexism: While they may not have experienced such humiliation in doing so, many teens have boldly battled their schools' sexist dress codes in innovative ways. Unfortunately, others have also likely encountered authority figures hell-bent on reinforcing archaic attitudes around female students' propriety — some of whom are equally vocal about their beliefs.

"Skin is a sexual distraction to a male," Jim Bazen, principal of Plymouth Christian High School in Grand Rapids, Michigan, wrote in an op-ed for the Grand Rapids Press in October. Exposure to female students' skin, he continued, forces their male peers to regard them as "sex objects" and women, therefore, must be told to "cover up!"

Durbin's story ultimately highlights the broader reality that stringent, unfairly gendered dress codes are not just sexist on face value, but emblematic of a deeper reality of normalized, everyday sexism.

"It's not about clothing," Maggie Sunseri, a junior at Woodford County High School in Versailles, Kentucky, and filmmaker of Shame: A Documentary on School Dress Codes, explained to Mic in December. "It's about the message behind the dress codes. It's not about just superficially what we're wearing, it's about what people are telling us that means about ourselves."

Watch the latest episode of Flip the Script on what school dress codes actually do: