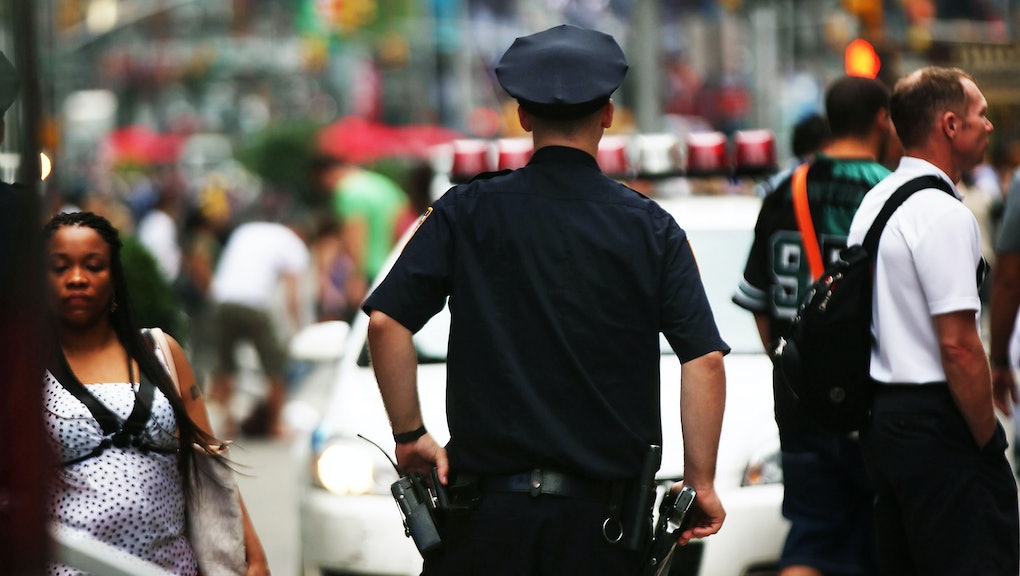 New York City stands on the brink of passing a set of bills that would represent a significant blow against a model of law enforcement known as "broken windows" policing that's garnered enormous criticism from progressive criminal justice reformers for years.

On Monday, the New York City Council will consider the Criminal Justice Reform Act, a set of eight bills that has the backing of the police department and the council speaker, making it very likely to pass into law, according to the New York Times.

The bills would change policing in the city by providing law enforcement officers with "a civil option" when responding to a number of low-level quality-of-life offenses. Police officers would have the discretion to penalize infractions like public urination without sending offenders into the city's criminal court system, which is currently inundated with low-level offenders who get slapped with warrants and jail time.

Other low-level violations that would be softened by the legislation include drinking alcohol in public, littering, excessive noise and defying park rules. "Such violations, while minor, made up a huge portion of the roughly 300,000 criminal summonses issued by city officers last year," the Times reported.

While criminal court for these infractions is still an option, police officers would have the ability to send someone accused of a violation to a civil court that hands out fines and civil judgments.

Why it matters: Should the Criminal Justice Reform Act become law, it would put a sizable dent in the controversial broken windows style of policing that has prevailed in New York for decades. Broken windows holds that minor signs of disorder like turnstile jumping serve as an indicator for more serious criminal tendencies in an area, and calls for zealous enforcement of those minor infractions with the hope that it discourages more meaningful criminal activity as well.

New York Mayor Bill de Blasio was elected in 2013 in part because of his pledge to put an end to systematic racial profiling by the city police, but he has remained a fairly consistent supporter of the broken windows model. He has called the idea of strictly enforcing quality-of-life rules a "progressive position."

But many progressive criminal justice reformers take issue with the way the broken windows model creates a mandate for police officers to harass and confront citizens in ways that often escalate to violence and breed mistrust between police officers and communities. In practice, it also means that low-income minority neighborhoods are swarmed with police officers who develop an authoritarian presence in the area.

The new law would give police officers more discretion to treat minor violations much more lightly, and could in turn make the police generally less attentive to such acts. But a lot of this will come down to how the civil option is actually put into use by police officers on the job. Currently, it seems that the civil option is poised to be the default response for minor offenses: "Where appropriate, the civil option is probably going to be the go-to option," Stephen P. Davis, the police department's top spokesman, told the Times. "But you have to have the criminal option available."

Some criminal justice experts are cautiously optimistic, but think the law will not end the tension that broken windows produces.

"It's encouraging that political leaders in New York City are exploring ways of reducing the impact of the criminal justice system on communities of color, but this package of reforms is at best a baby step, and at worst, may open the door to more racially discriminatory police actions," Alex Vitale, an associate professor of sociology at Brooklyn College, told Mic. "By giving police almost unlimited discretion in whom to arrest and whom to ticket, there is chance that people in nonwhite areas will be more likely to receive harsher sanctions, while white areas will enjoy broad decriminalization."

And while softening punishments for minor violations is a positive step, it doesn't represent a clean break from the generally punitive stance on small deviation from the city's quality-of-life rules.

"Even civil penalties, including community service, can represent a significant burden on people, interfering with work and family responsibilities," Vitale said.

Punishment in the form of fines and community service for minor infractions isn't unreasonable. But aggressive enforcement in marginalized communities can create just about as many problems as it solves. What remains to be seen is just how this law could change that dynamic.