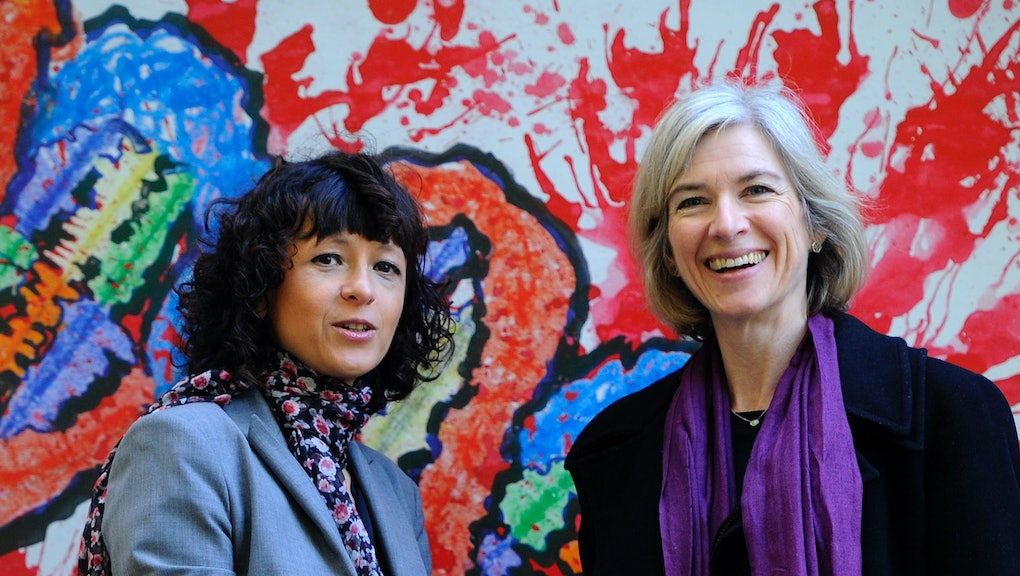 These Women Helped Create CRISPR Gene Editing. So Why Are They Written Out of Its History?

The development of gene-editing technology CRISPR has been a huge boon to the biomedical community, opening up the possibility of fixing genetic diseases and tailoring the genetic makeup of produce. But underlying this groundbreaking science is a debate over who should be credited with its invention.

Last week, Eric Lander, founding director of the Eli and Edythe L. Broad Institute of Harvard and MIT, released an article in a journal called Cell detailing the history of how CRISPR came to be. Lander takes readers on a journey from the Spanish port city of Santo Palo, where a doctoral student in 1989 devoted himself to understanding a microbe's curious reaction to high salt concentrations, all the way to the U.S., where we meet a young scientist named Feng Zhang. In 2011, Zhang heard his first talk on CRISPR, leading him to make his own discovery: the gene-editing technique CRISPR/Cas9. The story ends with Zhang, who is affiliated with Broad Institute, finessing the CRISPR technology into its most current form.

But something's missing from the story: What the long tale fails to highlight is that Broad Institute is currently in the middle of a billion-dollar legal battle with the University of California at Berkeley over CRISPR/Cas9 patents. Lander also diminishes the role of two women in the development of CRISPR/Cas9, according to the MIT Review: Jennifer Doudna, a biochemist at Berkeley, and Emmanuelle Charpentier, of Germany's Helmholtz Center for Infection Research.

In 2012, Doudna and Charpentier published an integral paper that explained how to use the Cas9 bacteria to make exact cuts in DNA. The document sent researchers in the field scrambling to see how this method could be replicated in humans and animals. Doudna and Charpentier went on to win the Breakthrough Prize in Life Sciences for their discovery.

However, in 2013 MIT's Zhang and Harvard's George Church were first to publish two separate papers on the use of Cas9 in editing animal DNA. Doudna's paper describing the use of of Cas9 in altering animal DNA was published four weeks later, according to the New York Times.

But what Lander argues in his telling of the CRISPR/Cas9 discovery is that in 2011, Zhang hit on the same revelation as Doudna, but before her study was published. Since then, Broad Institute has been awarded CRISPR-related patents even though Doudna filed for the same patents months before, according to the Scientist magazine.

How'd this happen? Jacob Sherkow, professor of law at New York Law School, told the Scientist that Broad Institute may have filed through the Patent Trade Office's fast-track program, which approved his application within six months.

Now, Doudna is legally disputing whether those patents rightfully belong to Broad.

Lander's article has many in the scientific community up in arms because it serves as a potentially revisionist history, lending credence to his institution's fight against Doudna. As Harvard's George Church said to the Scientist, "Eric's Cell paper systematically misses the important role of many younger researchers."

Furthermore, there's a question as to whether these patents should be privately owned at all. Michael Eisen, a Berkeley biologist and investigator at the Howard Hughes Medical Institute, recently tweeted:

Most concerning to the scientific community is how Lander is seemingly throwing around his influence to achieve a favorable outcome for not only Broad Institute, but Editas Medicine, a gene-editing company started by Third Rock Ventures, a firm Lander has ties to, according to the MIT Review.

Furthermore, his write-up serves as yet another instance of a woman being written out of scientific history. The phenomenon of such omissions is so elucidated that it has become the subject of listicles. This helps explain the urgency behind the backlash to Lander's report: Here again, a male leader appears to be usurping credit (and therefore financial gain) for a discovery that was the work of many.