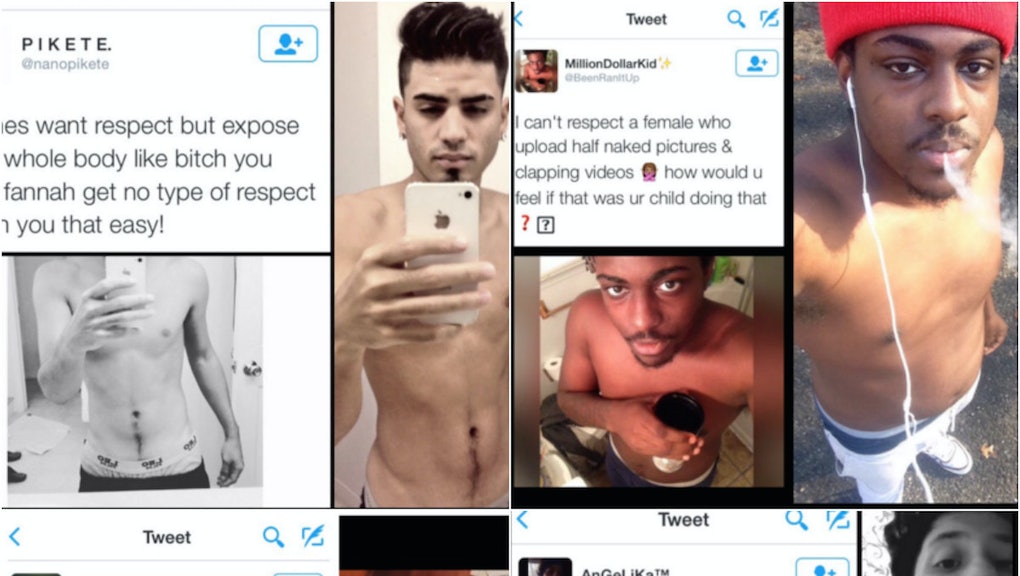 If you're a woman on the internet, you're caught in a perpetual Catch-22: If you don't post sexy selfies on Instagram, guys will constantly message you and ask for some, and if you do, guys will constantly message you and call you a thirsty whore. It's gotten to the point where women looking to avoid slut-shaming on the internet should either just get off the grid entirely, or staple up their lady bits and live a solitary life on a Nepalese alpaca farm.

Luckily, one brave woman is here to call bullshit on the whole shirtless selfie-shaming double standard. @CardsAgstHrsmt, who goes by Lindsey and describes herself as an "intermittent humorist" on Twitter, is calling out guys who shame women for posting sexy selfies online in the best way possible: by tweeting their obnoxious comments alongside their own (frankly, largely unimpressive) shirtless selfies. Because frankly, dudes could stand to get a taste of their own medicine.

Although women are discouraged from baring their breasts on Facebook and Instagram, shirtless photos featuring men are more than welcome on both platforms. Lindsey is far from the only person to point out the shirtless-shaming double standard on social media.

Last year, James Shamsi proved this point by posting a close-up photo of his own nipple on Instagram, correctly predicting that Instagram would yank the photo based on the assumption that the image was of a female nipple. After Shamsi alerted Instagram and told the app that the nipples in question were male, Instagram promptly reinstated the photo.

Orange Is The New Black star Matt McGorry has also called out the double standard, posting a topless selfie on Instagram last year and editing Chrissy Teigen's and Miley Cyrus' nipples over his own. "Can't you tell by how perverse my photo has become without my asexual male nippies?" McGorry wrote sarcastically before adding, "our society objectifies women and creates these different standards for men and women (and other genders)."

Even when women aren't technically shirtless on social media, they still face censure if their photos are interpreted as intentionally provocative, with male commenters often accusing them of being thirst traps eager to disrobe for more likes or followers. While this trend isn't exclusive to one gender (hello, The Game, it was nice to meet you and your enormous package), it's far more common for men to mock women for showing some skin on Instagram.

"Much like selfies in general, [thirst traps] are directly associated with the negative stereotypes of women being superficial, self-obsessed or trying to get attention," Lauren Duca previously wrote for Mic.

But by calling out these shirtless selfie-tweeting dudes for what they are — i.e. hypocritical dingbats — @CardsAgstHrsmt is doing her part to bring an end to slut-shaming online once and for all.