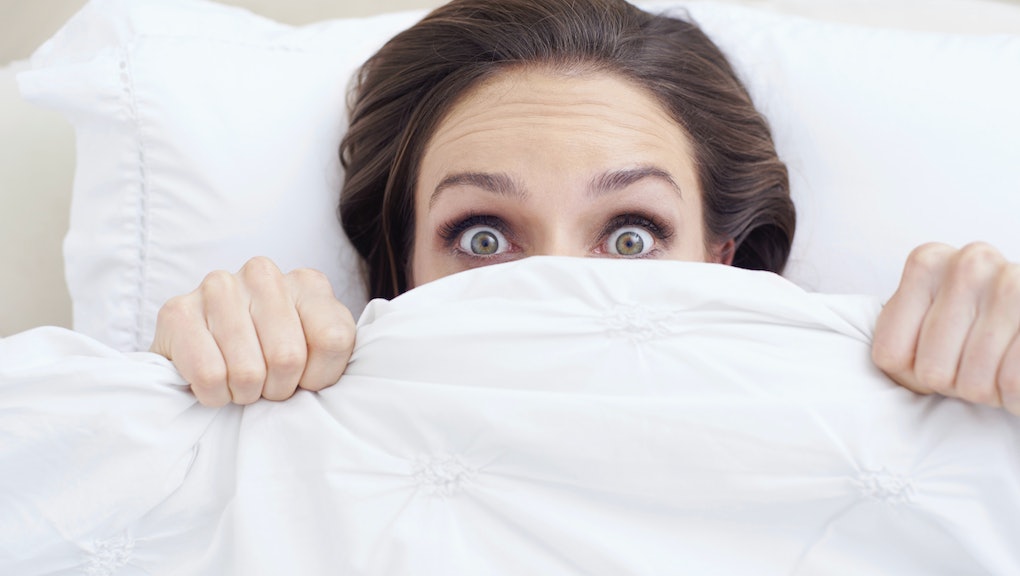 Here's Why Your Anxiety Dreams Are Actually Good for You

We've all had similar dreams. Personally, I tend to dream I have to go onstage to perform in a play I've never rehearsed. I frantically flip through a script backstage, trying desperately to absorb as many lines as I can.

On Facebook, friends described their own stress dreams: having to do up a shirt with an unending number of buttons; being sent back to high school and forced to complete an impossible exam; working in a restaurant with endlessly multiplying tables; having their teeth fall out in a crumbly, bloody mess.

What causes them? "Stress dreams just come from carrying anxiety," Shannon McFarlin, a licensed marriage and family therapist who works with the therapy app Talkspace, told Mic. "They're a way for the subconscious mind to release some of those feelings." The dreams often have similar themes, McFarlin said. They make you feel exposed, unprepared or powerless.

It's a problem. People who deal with stress and anxiety in their waking lives usually don't want to feel that way when they sleep. It's a vicious cycle: Adults who experience persistent stress tend to have trouble sleeping. When we don't get enough sleep, it can perpetuate our anxiety. Take Lexi Nisita, for instance: In the week we spoke, she'd been having an unpleasant recurring dream about meeting a former boss for lunch.

"I am chewing a green salad and talking animatedly in between bites, and increasingly I start to notice my jaw seizing up," Nisita, 25, wrote via email. "It gets tighter and tighter and I can't talk, and my whole face is swelling and turning red, and my mouth is stuck open with a bunch of chewed-up spinach sitting there. It's disgusting."

But there's a silver lining. Stress dreams may seem like nightmares, but according to dream experts, they're actually good for your overall mental health.

"There's no such thing as a bad dream," psychologist and dream expert Ian Wallace told Mic.

Stress dreams don't randomly cast themselves upon us, Wallace said. Rather, we subconsciously create them to help ourselves confront problems we're experiencing in waking life, or to work through pent-up emotional tension. Think of them as trial runs for real-life action.

"What you're actually communicating is that you have a powerful opportunity to take ownership of some aspect of your life," Wallace said. "It's a lovely natural process."

The more disturbing a dream appears, the more "leverage" you have to make positive changes in your waking life.

"It would be nice if we all dreamed of lying on silk cushions and having our faces licked by puppies," Wallace said. But if that were the case, "we wouldn't be getting anywhere" with our real-life issues.

"Your dreams are with you every step of the way, advising you, smacking you in the face when you mess up. They're your inner guru," Loewenberg said. "It's really important to keep up a conversation with them."

There's another reason why your stress dreams may not be as bad as you think: You aren't meant to take them literally.

I spoke to a number of women who are plagued by regular pregnancy dreams. I've had them too — and feared they meant I was actually pregnant.

Women get pregnancy dreams at all ages — even when they're in their 50s, 60s and 70s. "If you're not trying to get pregnant and you get a pregnancy dream, don't worry," Loewenberg said. "It symbolizes something that's in the works in your life — like a pregnancy growing and developing — and the end result will be a new life for you."

The same line of thinking could explain Moss' dream about being chased by a murderer. In our waking lives, if we're stressed about someone being mad at us, we often say person "wants to kill us." In dream form, that sentiment may manifest as, well, a person trying to kill us.

Do you ever have terrifying stress dreams about burning buildings? Don't worry — just another metaphor. According to Loewenberg, it's your body giving you a warning "that you're completely and totally on the verge of being burnt out."

"That's the cool thing about the way dreams work: They allow you to see your current situation and your behavior in a different light, so you can better understand it," she said.

Loewenberg advised we think of dreams as our "very best friend in life."

"They're with you every step of the way, advising you, smacking you in the face when you mess up. They're your inner guru," she said. "It's really important to keep up a conversation with them."