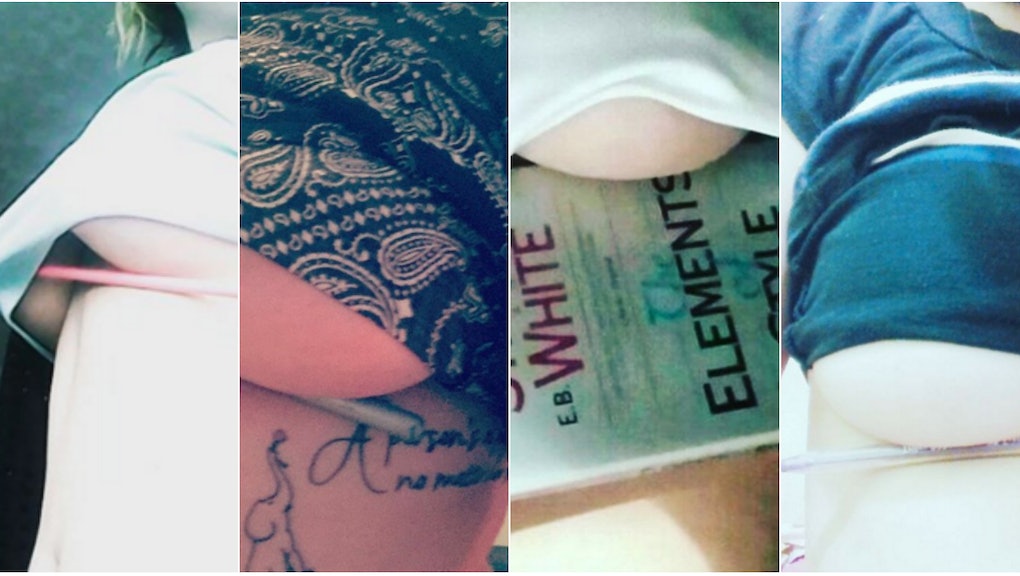 The #UnderboobChallenge Is the Latest Body-Shaming Trend on Social Media

The underboob is on the rise.

A new viral trend, the latest in a series of attention-grabbing, body-conscious stunts, has blossomed in the wilds of the internet. It involves a whole lot of underboob — the part of the anatomy made famous by Rihanna's tattoo and Beyoncé's magazine cover — and a writing utensil. Your high school English teacher is already blushing.

The trend has spawned a few different hashtags, including #UnderboobChallenge, #PenChallenge and #CarryPenUnderBreast. The task is simple: keep a pen or pencil snug beneath one's breast. Unsurprisingly, it appears to favor women with larger chests, which has certainly made some bystanders happy.

Congratulations, ladies: We finally have our very own version of a dick-measuring contest.

According to Mashable, the trend appears to have originated in China, with a number of posts popping up on Weibo, the country's Twitter-like microblogging platform. Indeed, a quick search for "chest clip pen" — the English version of the Chinese phrase — shows a number of women showing off their underboob skills.

These kinds of things tend to spread quickly, however, and the #UnderboobChallenge has crossed oceans and continents to make it to the United States. You can now find the posts on Twitter and Instagram.

In true internet fashion, it has even spawned a meme or two:

There have also been more than a few attempts at trolling, most of which have come from men:

Some people are using it to fight back against body shamers:

While others are simply having fun pointing out its absurdity:

Some have alluded to the idea that the challenge is meant to prove the participant's "real woman" status, which is a uniquely atrocious idea. (At least one tweet supports this notion.)

As with the #KylieJennerChallenge debacle and the #BellyButtonChallenge, which encouraged users to stretch their arms around their waists in an effort to prove their slimness, the #UnderboobChallenge seems to be hellbent on highlighting a specific set of beauty standards. Throw social media — the online version of a peacock strut — into the mix, and you have 2016's first weird and slightly uncomfortable viral trend.

Thankfully, not everyone is taking it seriously.