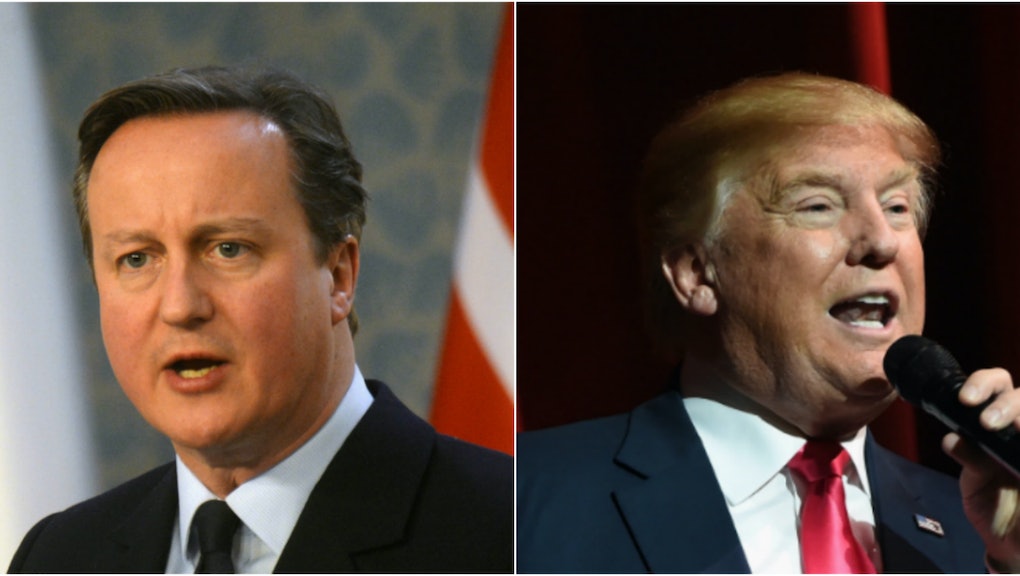 DAVOS, Switzerland — Earlier this week, British members of parliament debated whether to ban Donald Trump from the United Kingdom, responding to a petition with more than 570,000 signatures calling for the Republican presidential frontrunner to be prohibited from entering the country for his divisive comments about Muslims and Mexicans.

On Friday, British Prime Minister David Cameron weighed in, telling Mic in an exclusive interview at the World Economic Forum Annual Meeting in Davos, Switzerland, that Donald Trump has made a "fundamental mistake" in his rhetoric toward Muslims and is making the West's effort to confront the Islamic State militant group "more difficult."

Although Cameron did not weigh in on the movement to ban Trump specifically (he has previously rejected such efforts), he pulled no punches as he directly challenged Trump's call to ban Muslims from entering the United States.

"What Donald Trump says is, in my view, not only wrong but actually it makes the work we need to do to confront and defeat the extremists more difficult," Cameron told Mic.

According to Cameron, Trump's blanket statements equating all of the world's 1.6 billion Muslims with terrorism play directly into terrorist groups like ISIS' hands, as the group thrives off of clash of civilizations rhetoric.

"I think the problem with what Donald Trump has said, and what some others say too, is they are making a fundamental mistake of trying to blame all of Islam and all Muslims for what is the ideology and the actions of a minority, and I think that's wrong," Cameron told Mic. "In many ways, it actually helps the extremists, because they want to create a clash of civilizations between Islam and Christianity, or Islam and the West."

Instead, Cameron called for tolerance and pressed leaders to understand that contrary to Trump's rhetoric, Islam is actually a religion of peace.

"What's happening is not a clash of civilizations," Cameron told Mic. "It is a fight within Islam, where the overwhelming majority rightly see Islam as a religion of peace and want to live in successful multi-racial, multi-ethnic, multi-faith democracies like ours, and make an incredible contribution to our country, as opposed to a small minority that believe this rhetoric of poisonous extremism."

Cameron's comments came as part of a longer interview with Mic in Davos, focused on foreign policy, including the fight against terrorism, the war in Syria and the refugee crisis.