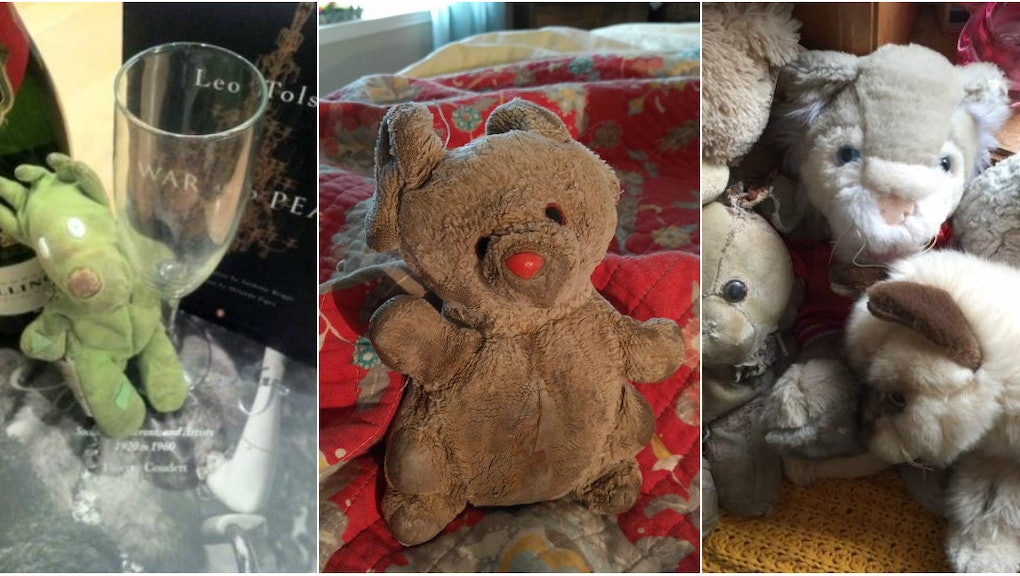 Do you still sleep with a stuffed animal? It's a simple yes-or-no question, but one that might make any self-respecting adult a little nervous if the answer is "yes." Yet when BuzzFeed writer Grace Spelman recently tweeted a request that her followers post photos of the stuffed animals they sleep with, she got more than a few responses from adults who still cuddle with their favorite little fuzzy buddies.

Apparently, it isn't that uncommon for grown-ups to hold on to their favorite childhood toys. According to a 2015 survey by the online bed retailer Time4Sleep, 51% of men and 39% of women still have their childhood stuffed animals, and 28% of men sleep with them every night. For these guys, the stuffed animal is a reminder of home and a comforting thing to snuggle up with at night.

The prevalence of grown-ups sleeping with stuffed animals was enough for Harvard University researchers to examine what effect, if any, the toys have on adults. What they found was that the presence of something that reminds people of their childhood offers them a moral compass, so to speak, that they wouldn't otherwise have, leading to more "pro-social" behavior and a 20% drop in the number of people who cheat. In short, people are kinder and more empathetic when they're in the presence of stuffed animals.

While having a stuffed animal doesn't come without its own complications — what do you do if your date comes home and sees Mr. Frog sprawled out on the bed? — the benefits of having a reminder of your childhood always by your side far outweigh any weird looks you might get from your friends. In celebration of the effect our childhood toys have on our lives, we asked 14 adults to tell us about their stuffed animals and why they mean so much.

If you still have a stuffed animal, traveling without it isn't an option.

"I have had Mousy since I was born, and will sleep with him until I die or he falls apart. He has his own bag for travel (if the plane goes down, Mousy goes with me) and has occasionally gone to work with me when the depression hits. 32 years old and unashamed." ? Megan, 32

"I have a wind-up musical bear that I've had since I was a baby named Bearly. I brought him to college with me, and he always gets a place of honor. I don't always sleep with him anymore since my bed is full of pets and husband, but I like to bring either him or Dap the Dapper dog with me when I travel. I have never hidden them, but for a while in college I was defensive if people seemed critical or skeptical." ? Becky, 29

"Ted [a teddy bear] flew halfway across the country to keep me company while working on our federal election in October. He's better company than most people." ? Alissa, 33

"I have a Bert the Farting Hippo, like the one Abby on NCIS has, that I sleep with every night. I took out the farting mechanism, though, because it kept waking me up. He goes with me camping, to hotels, traveling ... I never sleep without him. He has joined me on choir tours, family get-togethers, reunions, etc. Usually people are amused by him once I tell them he's from NCIS. I figure anyone of any age can have a 'security blanket' of any sort, living or stuffed." ? Chelsea, 26

People who think your stuffed animal is weird can bugger off.

"[My stuffed animal] is a sock monkey that was a Christmas gift from my aunt when I was eight. It was a make-your-own kit that my mom helped me with on a snow day. I am sometimes embarrassed, but if a friend/sexual interest/romantic partner can't handle it, I don't need them in my life." ? Nora, 22

"Every night I sleep with the same stuffed animal who was in my crib when I came home from the hospital. And I'm 33. I've always just been like, this is my bear. If you want to sleep here, you can't have a problem with him. Surprisingly, no one has ever seemed creeped out," ? Sarah C., 33

"Mr. Hamish (Hammie) may or may not have followed me to work one day. I don't hide him when people come over. Why bother? I don't keep friends who would mock our awesome childhood bears." ? Sean, 34

Even when you get older and start a family, your beloved stuffed animal never loses its importance.

"I have a horse named Apples that slept in the bed until I had a baby. I moved him to the closet after the baby was born because he's old and kind of fragile and I didn't want to get baby effluvia on him. No one's ever said anything weird about him. Mostly he just sits on the bed and I decorate around him." ? Elizabeth, 29

"I have a frog. He's dapper. My son has an elephant. My other son has a snowman, a giraffe and a monkey. Our house is stuffed animal-friendly." ? Nicole, 35

Sometimes, your partners don't think having a stuffed animal is weird at all.

"Spikeroll is a real cool grown-up character in this picture. He lives on my bed just like a throw pillow. I've never had anyone see him and think it's weird, though some people have told me he is cute. (He is!)" — Jen, 28

"I have Baby. I stopped sleeping with Baby a while ago, but he still hangs out on my radiator because he likes having a toasty perineum! When he was in my bed, he was an accepted member of the family." — Matt, 31

Even if someone did think it was weird, you wouldn't care.

"I have a cat. I have had her since I was 4. My boyfriend doesn't say shit about her, and even if he did, I wouldn't care. I sleep with her every night, unless I'm traveling, and I will until I die." ? Alle, 31

It's simply a do-or-die type of love.

"I have a Care Bear that I received for my 5th birthday — he's gone everywhere with me, from college to a sketchy Austrian youth hostel. I'm estranged from most of my family, and can't 'go home' to the place where I grew up — I've found that the bear began occupying a more important place in my life once I realized that he was the only part of my childhood I was likely to really be in contact with ever again.

My current boyfriend made a point early on in our relationship of saying that he didn't think I was a weirdo for having a stuffed animal, and three years into living together, my bf is not weirded out by coming home and finding the bear casually sitting on our love seat. I do still hide the bear when I'm going to have sex, though — he's been through enough, he doesn't need to see that. Also, despite our 28 years together, I never got around to naming him." ? Gabrielle, 33

"Butter is now about 30 years old, missing an eye, tattered, flattened, sewn several times over in a few odd seams, but he's perfect. Butter smells like sweet, dreamy sleep. He's a comfort and were there a fire, he'd be the first thing I grabbed once all living creatures were ushered from the flames." ? Sarah P., 35