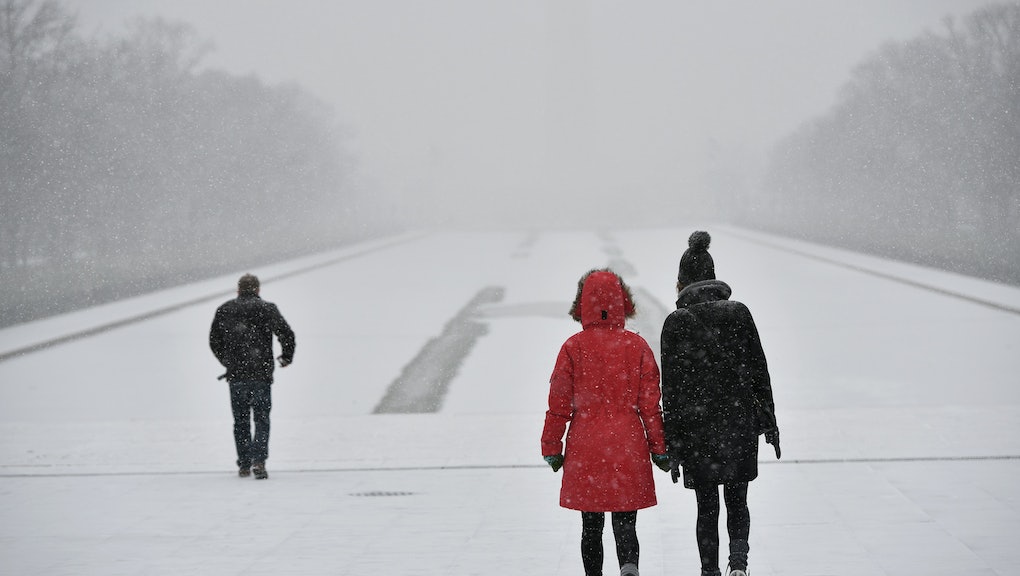 It was a warm winter in the East Coast, until Winter Storm Jonas rolled into town. With it, global warming deniers will once again use cold weather as evidence that climate change does not exist. However, that's far from the truth. On a global scale, carbon emissions have risen while the sea level continues to rise. Even climate change deniers are hard-pressed to counter such claims when presented with hard science backed by concrete facts.

Global warming is almost universally agreed in the scientific field: Globally, around 97% of climate scientists that, specifically, human-caused climate change is presently happening, according to the American Association for the Advancement of Science. As the organization notes, "This agreement is documented not just by a single study, but by a converging stream of evidence over the past two decades from surveys of scientists, content analyses of peer-reviewed studies, and public statements issued by virtually every membership organization of experts in this field."

In other words, it's the equivalent of an expert in any relative field universally recognizing a problem — one prominent example being the consensus that vaccines do not cause autism.

2015 was the hottest year on record: Since the recording of worldwide temperatures began in 1880, no year was warmer than 2015, according to a report by the U.S. National Oceanic and Atmospheric Administration and NASA, released Wednesday. Of course, this topped 2014, which was previously the hottest year on record, a sign that this could become a recurring theme in our global temperatures.

"Is there any evidence for a pause in the long-term global warming rate?" Gavin A. Schmidt, head of NASA's climate-science unit, said, according to the New York Times. "The answer is no. That was true before last year, but it's much more obvious now."

We produce more carbon dioxide now than ever before: Last year, the amount of carbon dioxide in the atmosphere was higher than it had ever been in the past 800,000 years, according to recordings from the National Oceanic and Atmospheric Association's Mauna Loa Observatory in Hawaii (h/t ThinkProgress). The overall total was 402 parts per million.

"Never in the history of the planet have humans altered the atmosphere as radically as we are doing so now," climatologist Peter Gleick said, according to ThinkProgress.

Global warming costs billions: Global warming is more than just a temperature change — it's really, really expensive. According to a report by the United Nation's Intergovernmental Panel on Climate Change, released in March 2014, the Earth's rising temperature could amount between $70 and $100 billion a year. This would be the result of "the combined cost of crop losses, rising sea levels, higher temperatures and fresh water shortages," according to CNN.

Furthermore, the estimates do not account for major, catastrophic natural events (think a Tsunami), which would cost a significant amount of money.

The sea level keeps rising: In the last century alone, the global sea level rose around 6.7 inches, and in the last decade, that rate has nearly doubled, according to NASA's climate change projections. The main factors in the global sea level rising is thermal expansion, the melting of the ice caps and glaciers and ice loss from Antartica and Greenland, according to National Geographic.

It is also much more than just an inconvenience, and has an effect on several layers of the ecosystem. "As seawater reaches farther inland, it can cause destructive erosion, flooding of wetlands, contamination of aquifers and agricultural soils, and lost habitat for fish, birds, and plants," according to National Geographic.

To gain further awareness on the issue, the government of the Maldives even held a cabinet meeting underwater in 2009, as the country could disappear over time if the ocean level continues to rise.

The ice sheets are shrinking: As a result of the rising temperatures, ice caps and glaciers across the Arctic are continuing to melt at a frenetic pace. It's so fast, in fact, that the Arctic summer could be ice-free by 2040, while the Arctic winter could produce four times less snow and ice, according to a December 2006 issue of Geophysical Research Letters (h/t Live Science).

The present-day effects of a warming Arctic region hit the mainstream media spotlight in the summer of 2015, when a photo surfaced of an extremely malnourished polar bear. Though the polar bear's condition cannot be directly attributed to climate change, the fact that it's habitat for hunting (mainly, ice) is declining has experts concerned for their long-term wellbeing.

"You can't say 100% that it starved to death, but that's probably what happened," Ian Stirling, a professor at the University of Alberta who has studied polar bears for 40 years, said according to Mashable.

California is a microcosm of the potential, worst-case effects: As California continues to suffer the effects of a significant statewide drought — the worst in 165 years — 99.84% of the land is suffering from the drought, according to research compiled by MSNBC in April 2015.

Most of all, it's severely threatened the livelihood of farmers in the area, whose crops keep dwindling.

As GOP candidates continue to deny the longstanding effects of global warming during speeches and debates — a consensus view among their party — the Earth has shown telltale signs that we are inflicting significant damage to the environment. It's real.