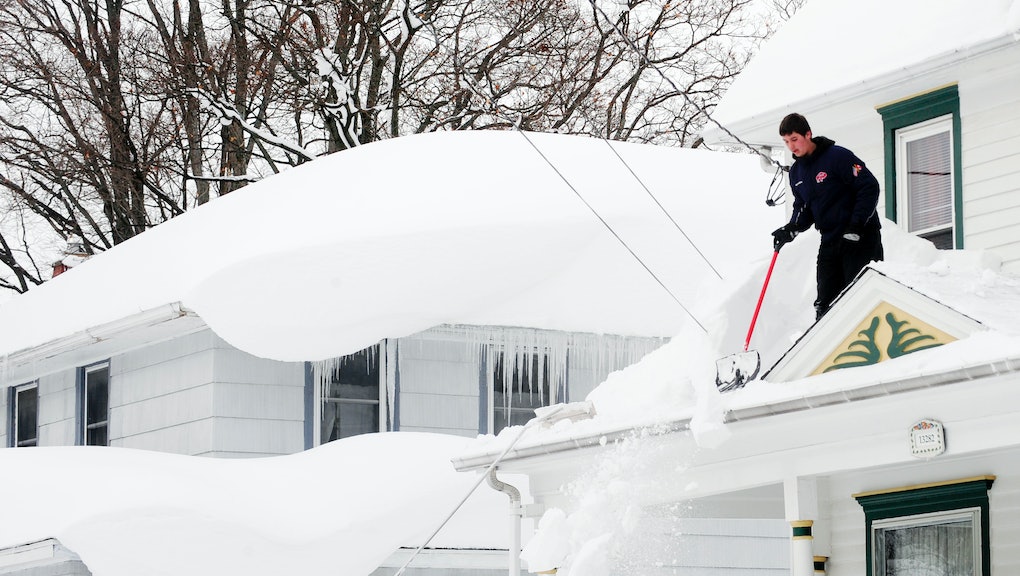 Will Your Roof Collapse Under the Snow From Winter Storm? Here's What You Need to Know

With a potentially devastating winter storm barreling toward the Northeast, there are a lot of storm-related concerns to keep track of — not the least of which is whether the snow will be heavy enough to cause roofs to collapse.

Different types of snow weigh different amounts, and some types of roofs are more susceptible than others. Pitched roofs tend to have less snow buildup than flat ones, for example. According to the Insurance Institute for Business and Home Safety, most roofs can handle "20 pounds per square foot of snow" before they're in danger of collapsing.

How much snow can a roof take: "20 pounds per square foot" looks different depending on what kind of snow it is: The Insurance Institute for Business and Home Safety estimates that number means a normal roof can safely handle up to 4 feet of new snow or up to 2 feet of old, packed, snow, which is heavier.

Danger signs: During a storm, warning signs that a roof is in danger include cracks, bowed pipes and creaking sounds.

How to get ride of snow on the roof: A public safety advisory released by the town of Hudson, Massachusetts, offered tips about how to safely remove snow from roofs, including using a snow rake to scrape the snow off while standing on the ground below. The advisory recommends trying to get the snow down to "2 or 3 inches on the roof" instead of "scraping the roof clean," and to wear goggles and headgear.

What not to do about the snow on the roof: The advisory warns against climbing on top of the roof and adding your body weight to what may be an already strained structure. It also cautions against using "hair dryers" or "open-flame devices" to try to melt off the snow, and warns that ladders can quickly become slippery with ice.