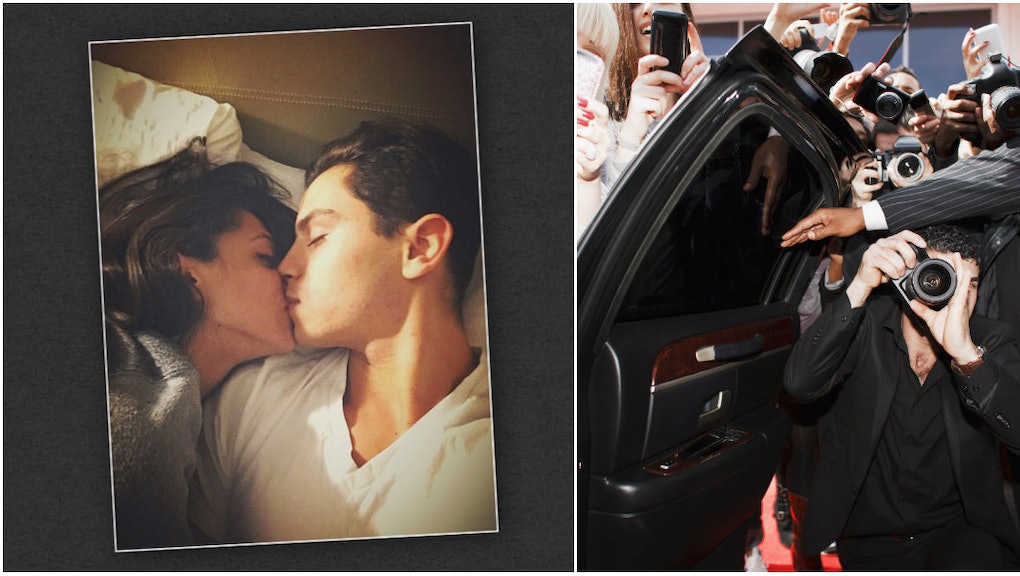 Disney star Jake T. Austin, 21, best known for his role in Wizards of Waverly Place, recently made headlines for dating a longtime fan, 22-year-old Danielle Ceasar. After tweeting at him for years, in 2012 Ceasar met Austin in person at a Planet Hollywood, Seventeen reported. After their meeting, he followed her back. Now, Austin has announced via Instagram that he's "crazy for her."

Ceasar and Austin's relationship isn't just evidence of the power of social media to allow fans to directly connect with their idols. It's also raised the hopes fangirl hordes across the world. Thanks to Austin and Ceasar, hooking up with your favorite celebrity doesn't seem like such a far-off possibility — but the consensus is split on whether or not that's a good thing.

Like most other things, the internet has made it easier for fans to connect with celebs. (Ceasar reportedly started tweeting at Austin in 2009.) That, in turn, has also made it easier for celebrities to find dates online. Celebrities like Modern Family's Eric Stonestreet and actress Hilary Duff have admitted to using Tinder, and athletes like hockey star Paul Bissonette have admitted to picking up fans via Twitter direct messages.

"I do think it's easier than ever to connect with a celebrity because of online profiles. You can even score a date with James Franco through Instagram!" Angie*, a 30-something music journalist in New York City told Mic, referencing a 2014 incident in which Franco tried to arrange a hotel date with a 17-year-old fan.

Angie has some experience dating well-known musicians she predominantly meets through work. "The thing is, when a celebrity hits on you it's hard to say no to the date," Angie said. "You figure it's too interesting to pass up, and if they're a jerk at least you ate a nice dinner."

While there are a number of success stories — Matt Damon, for instance, married former bartender Luciana Bozan, who was reportedly a fan of his work, and Nicolas Cage wed former waitress and fan Alice Kim after he ate at a restaurant where she worked — not everyone thinks that fans hooking up with stars via social media is a good thing.

"This concerns me in terms of fans being able to distinguish fantasy from reality, and this concerns me in terms of stalking," teen psychologist Barbara Greenberg told Mic. "For the most part, celebrities are not within the reach of fans. They live in two different worlds. Usually you put posters [up of celeb crushes] when you're a teenager, and you think of it as someone you admire, not someone you're going to date."

Dating a celebrity also causes concern for potential imbalances of power. "When there's a power differential there's a lot more room for problems like disrespect, because the person has so much more power. With power comes more access to more resources, including money, invitations, vacations. So if you feel like the other person has power you will tolerate a lot more. Your threshold for what's painful becomes higher," said Greenberg.

Sara*, 25, works in television and was approached on Facebook by an actor who appeared on television show she had worked on as a production assistant. While she declined his invitation, she was struck by the dichotomy between his squeaky clean image and the manner in which he approached her. "I thought he was vanilla and wholesome, and then even after declining a date, he wouldn't stop sexting me," Sara told Mic.

Callie*, 33, a musician, went to a Broadway show starring a performer she admired after connecting with him on social media, and hung out with him after the show. "I was young. He was much older. It felt a bit coercive. When I got to his place, I said I wasn't sure I wanted to [have sex]. He said, 'Well, you're already here,'" Callie told Mic.

"If you put someone up on a pedestal, they're bound to fall very hard."

Angie told Mic of the disappointment that came when she slept with the lead singer of a band she admired, after connecting via social media, then learning he had a girlfriend. "I hooked up with one of my favorite singers since I was a kid through Facebook. For me it was all business getting an interview, but when we met he instantly started holding my hand and saying he wanted to marry me and then we fucked. He still texts me to this day and puts me on the list for his shows. I called him out on having his girlfriend at the last show I went to. He was avoiding me apart from waving to me from the stage. I'm all about honesty. I don't like that shit."

For the fan, finally scoring a relationship with the crush you've spent years Facebook stalking can cause extreme disillusionment. "If you put someone up on a pedestal, they're bound to fall very hard. Because really, when you put somebody up on a pedestal, you're creating something that's not based in reality," Greenberg told Mic.

Mic asked Greenberg what she would advise someone who came to her asking for advice after being approached by a celebrity. "1) That must be very flattering. 2) Go very cautiously," she said. "3) Expect that to be a temporary moment in your life, and make it into a temporary joy. It's unlikely to be something that's lasting, because a celebrity's life and relationships in general don't last for long. They just don't."